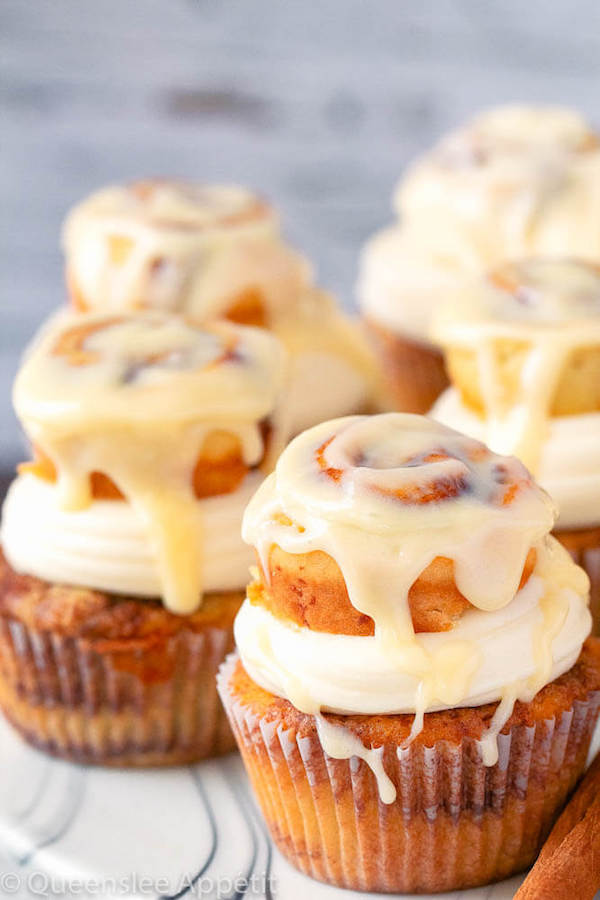 I’m a huge fan of transforming one dessert into another (like this Strawberry Cheesecake Ice Cream and these Mini Creme Brûlée Cheesecakes), because they’re such a fun and unique upgrade from a simple basic dessert.

I have a lot of 2 in 1 dessert recipes coming soon and I’m super excited to share them with you. Until then let’s get into this amazing cinnamon roll/cupcake hybrid! 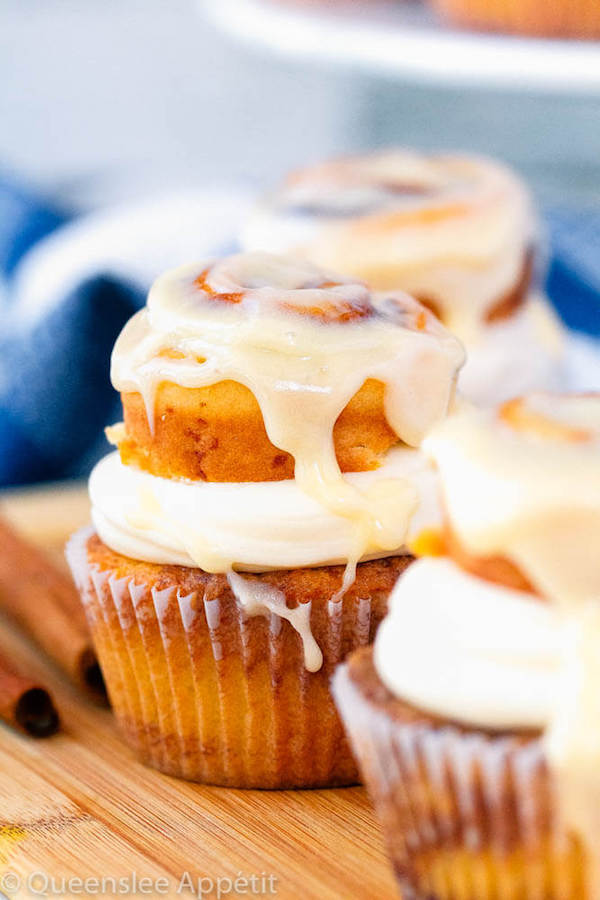 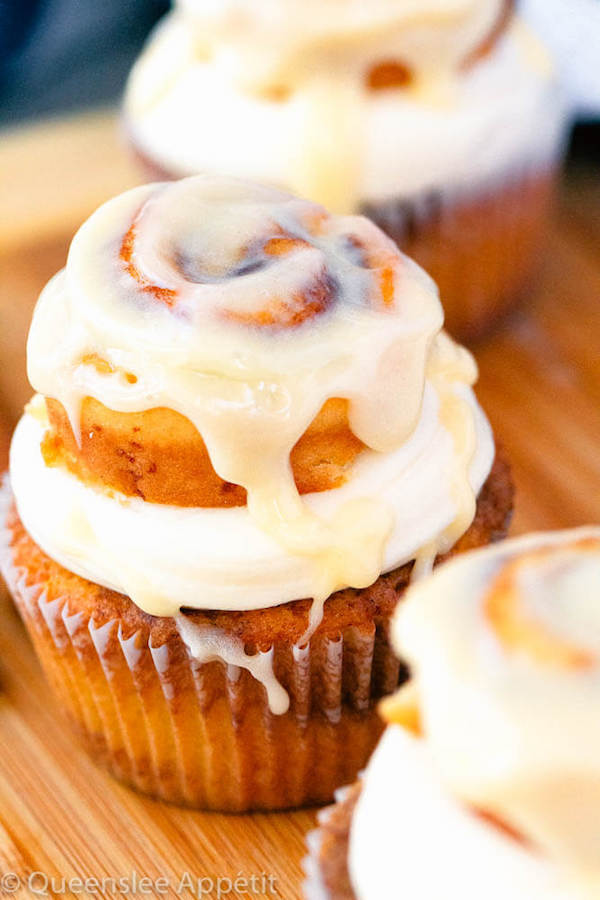 I think it’s now a known fact that I have a huge love for cupcakes, and cinnamon rolls are my favourite breakfast treat! So ever since I saw a photo of cinnamon roll cupcakes while scrolling through Instagram, I immediately knew I had to create my own!

Luckily, I didn’t have to spend too long developing my own recipe, since each part of these cupcakes comes from other recipes I’ve made in the past. For example, the vanilla-cinnamon cupcake was adapted from my Cotton Candy Cupcakes, the cream cheese frosting is from my Carrot Cake Cupcakes, and the cream cheese icing drizzle was taken from my Best Ever Cinnamon Rolls recipe!

I’m gonna start mix and matching different parts of my recipes to create something new a lot more often! Who knows how many more mind blowing creations I can come up with?! 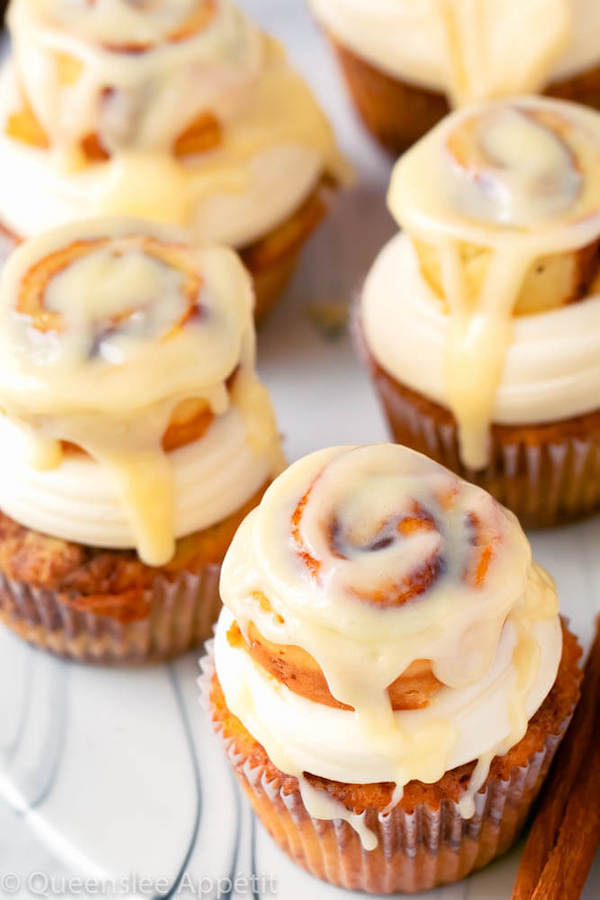 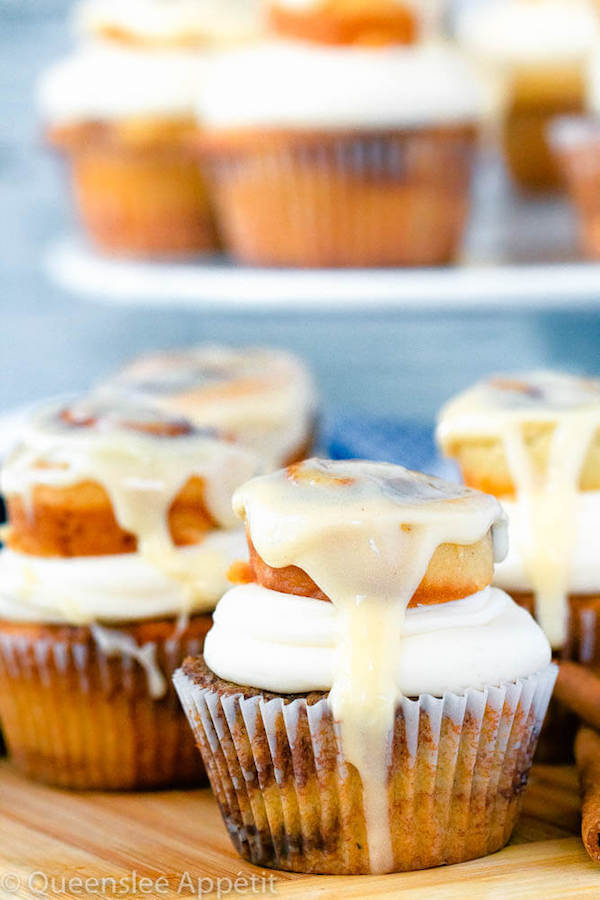 Let’s discuss the layers of these outstanding cupcakes. First we make the cinnamon swirl cupcake. I took my cotton candy cupcake recipe and replaced all the cotton candy and food colouring with vanilla.

I also added a bit of nutmeg because there’s nutmeg in my cinnamon roll recipe and I wanted the flavour of these cupcakes to taste exactly like them! 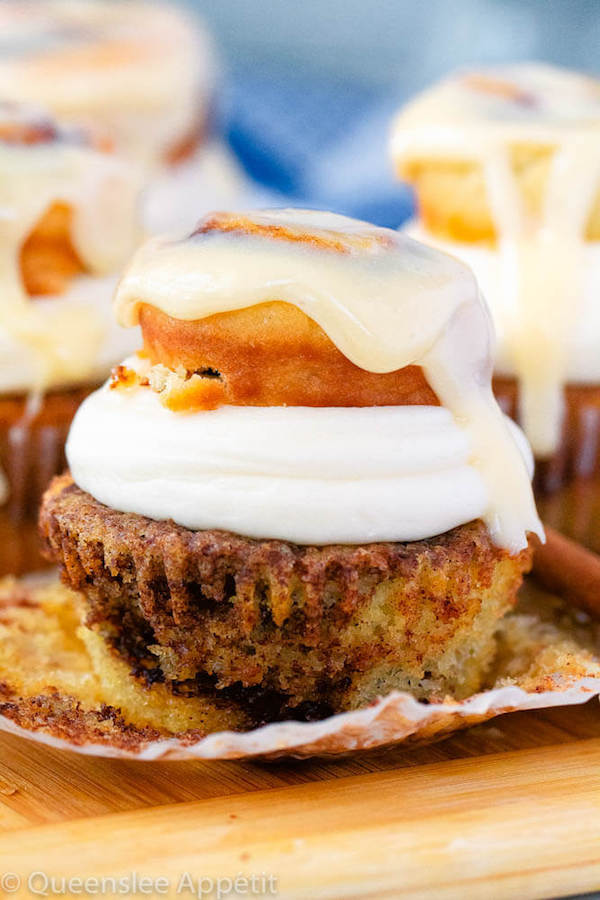 After making the cupcakes, we need to scoop a little bit into the liners, then sprinkle on a bit of cinnamon sugar made with dark brown sugar and cinnamon. Alternate between adding some cupcake batter and cinnamon sugar, then use a toothpick to swirl them both together.

Once baked, the cinnamon sugar filling should get all nice and gooey like it does in traditional cinnamon rolls! 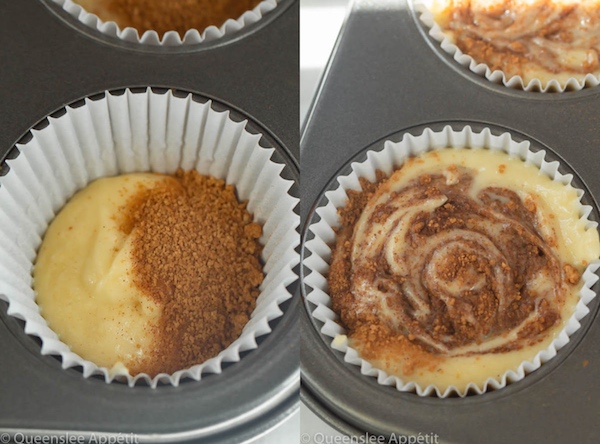 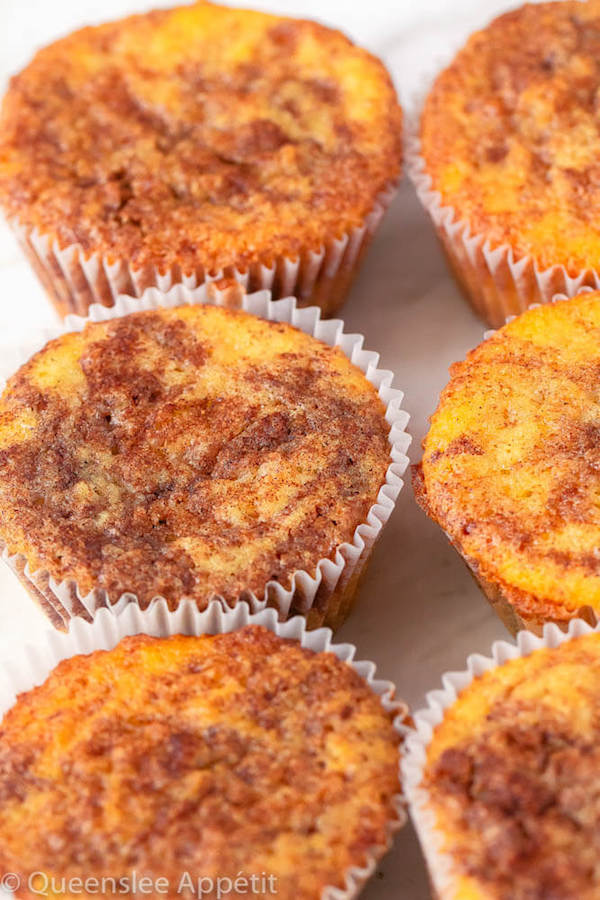 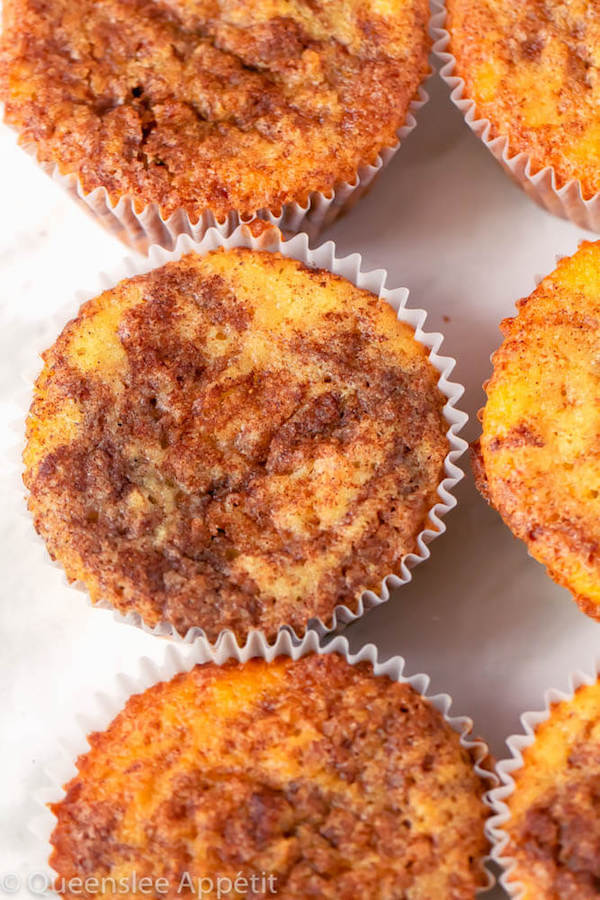 So of course there’s no better frosting to top these cupcakes with than the creamiest, fluffiest cream cheese frosting! 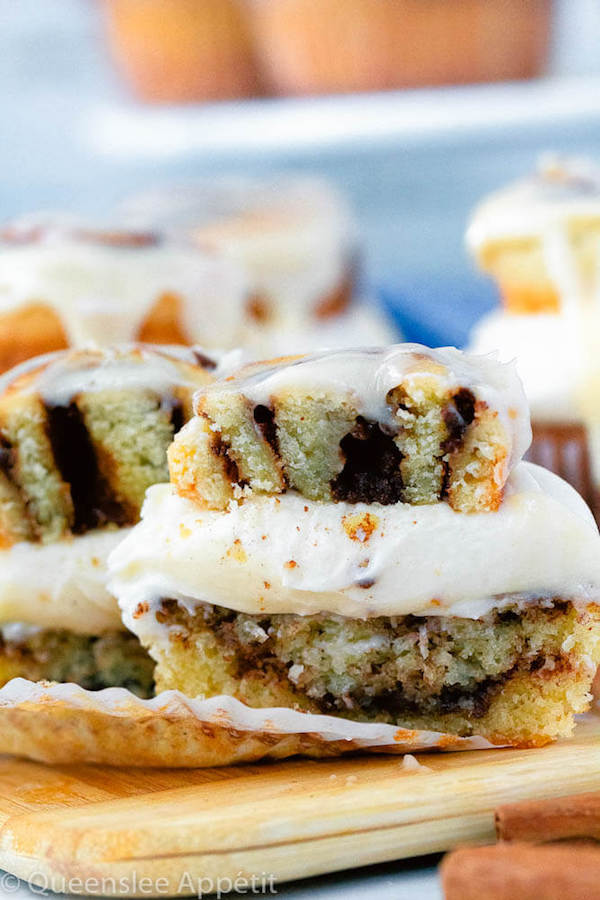 The store-bought cinnamon rolls do not come with a glaze (ridiculous, right?) which was actually a good thing for me since it gave me a reason to drench them in my own cream cheese glaze!

To make the glaze, we mix together butter, cream cheese, powdered sugar, vanilla and salt. To thin it out, we add about 2-3 tablespoons of milk. Even with 3 tablespoons of milk, the glaze was still pretty thick so if you want a thinner more pourable glaze, continue to add more milk a tablespoon at a time until you reach your desired consistency. 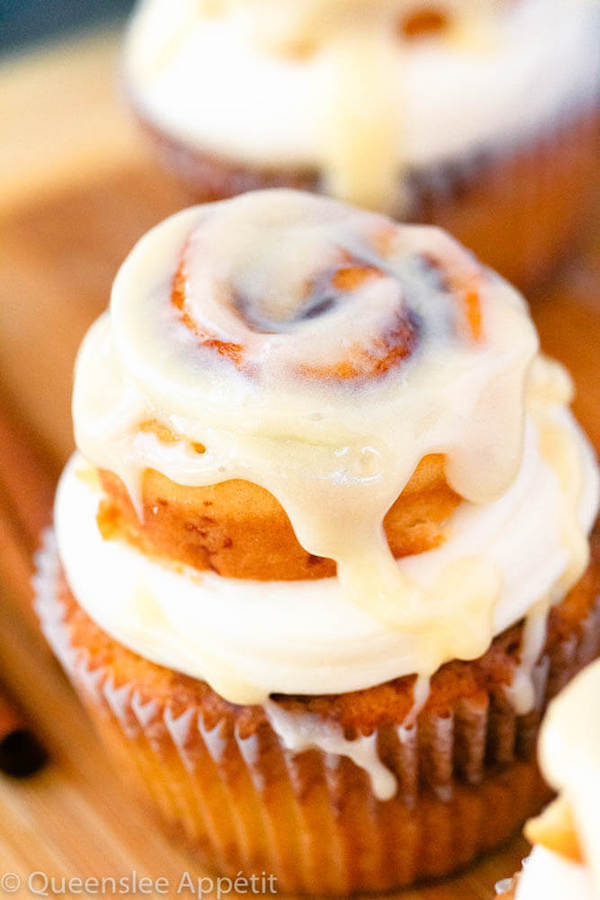 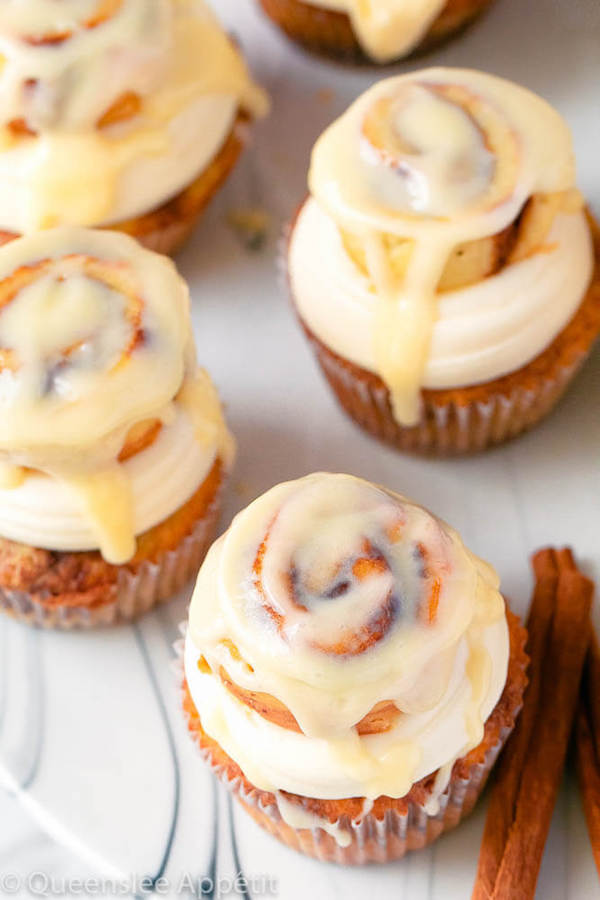 Beautiful, fun and delicious! These cupcakes are such a great mix of textures and flavours!

I’d love to know how these turn out for you, so if you make this recipe, come back and leave a comment down below to tell me how they turned out! 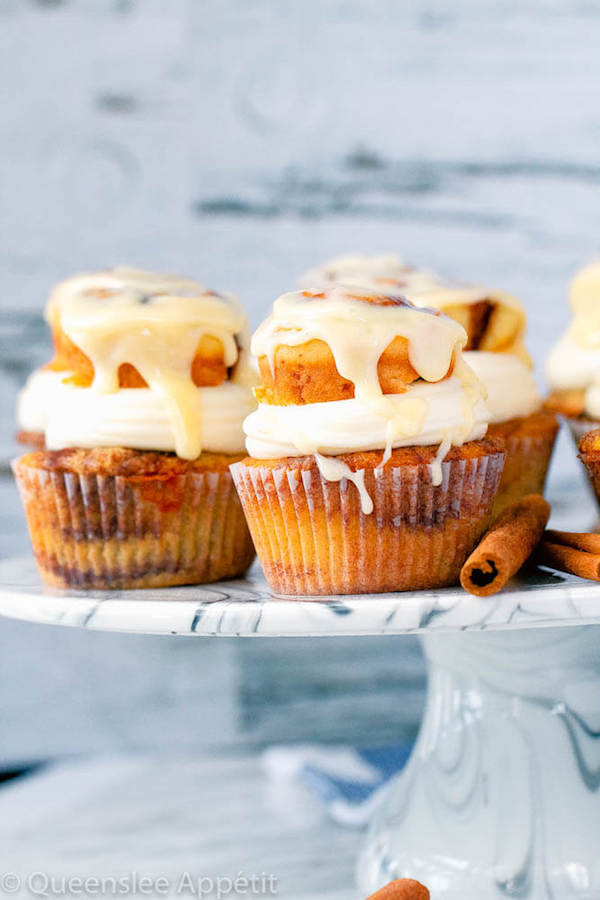 For the Cinnamon Sugar Filling:

For the Cinnamon Swirl Cupcake:

For the Cream Cheese Frosting:

For the Cream Cheese Icing Glaze: 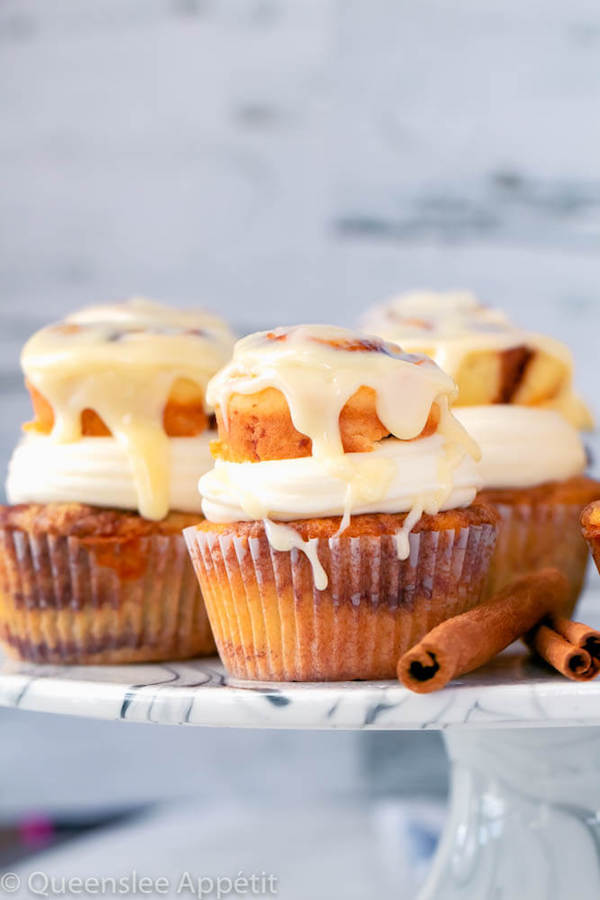 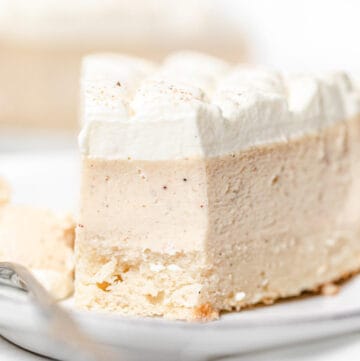 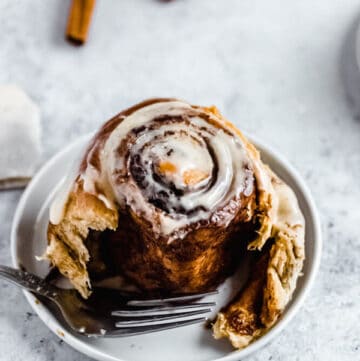 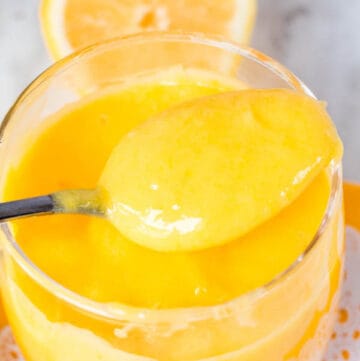 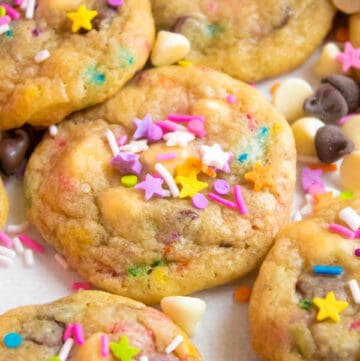