This Lemon Meringue Cheesecake is made with a rich and creamy lemon cheesecake base topped with a tart lemon curd and fluffy meringue. If you’re looking for the ultimate lemon dessert, look no further! 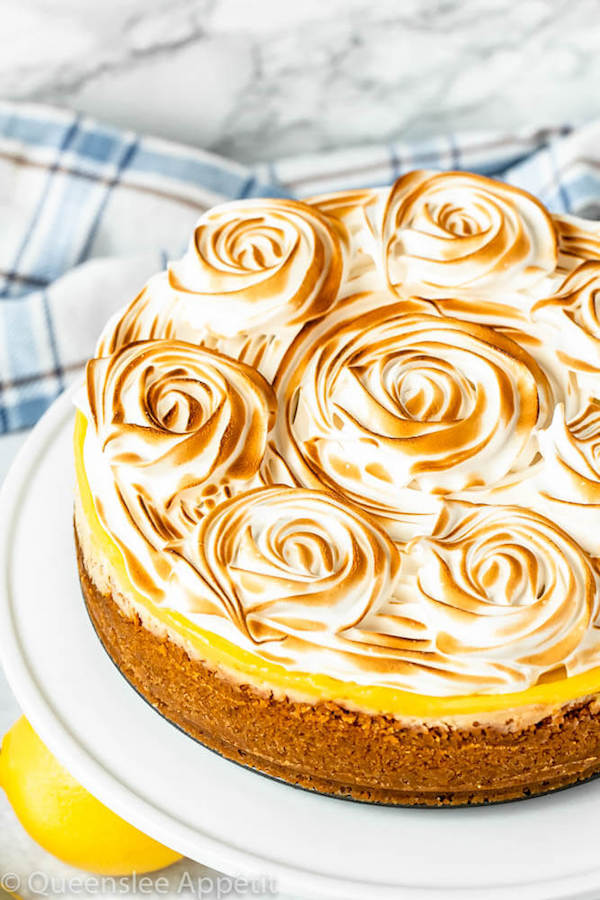 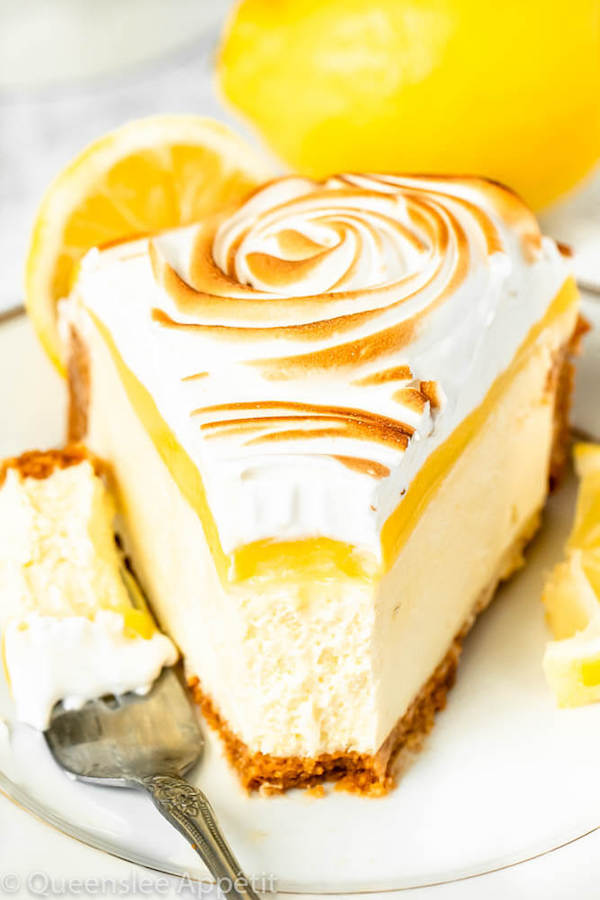 It’s Lemon Meringue week here at Queenslee Appétit! A few days ago I shared my Lemon Meringue Sugar Cookie Sandwiches recipe, which were so AMAZING it made me fall completely in love with lemon meringue desserts! This recipe has all the best parts of a classic lemon meringue pie and the creamy richness of a cheesecake. Win-Win! 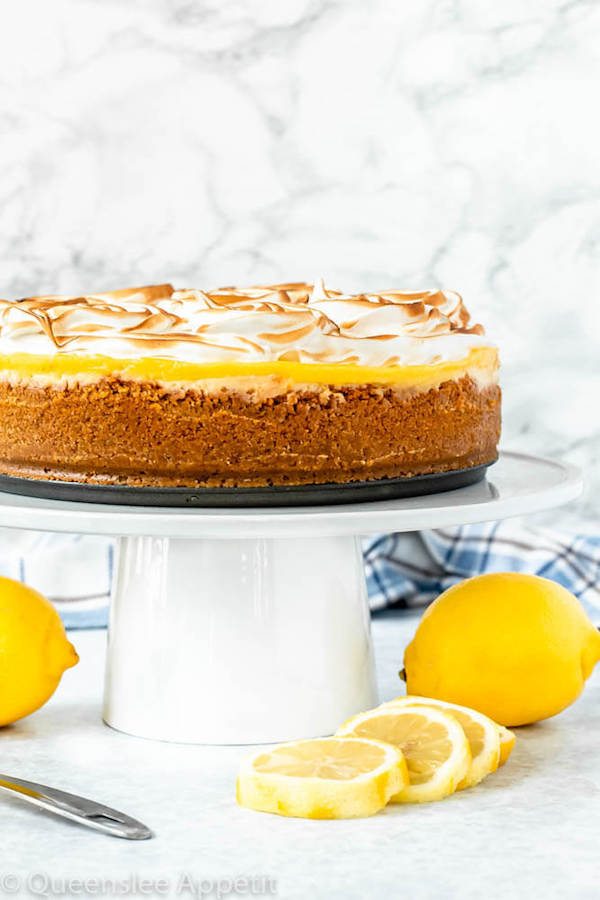 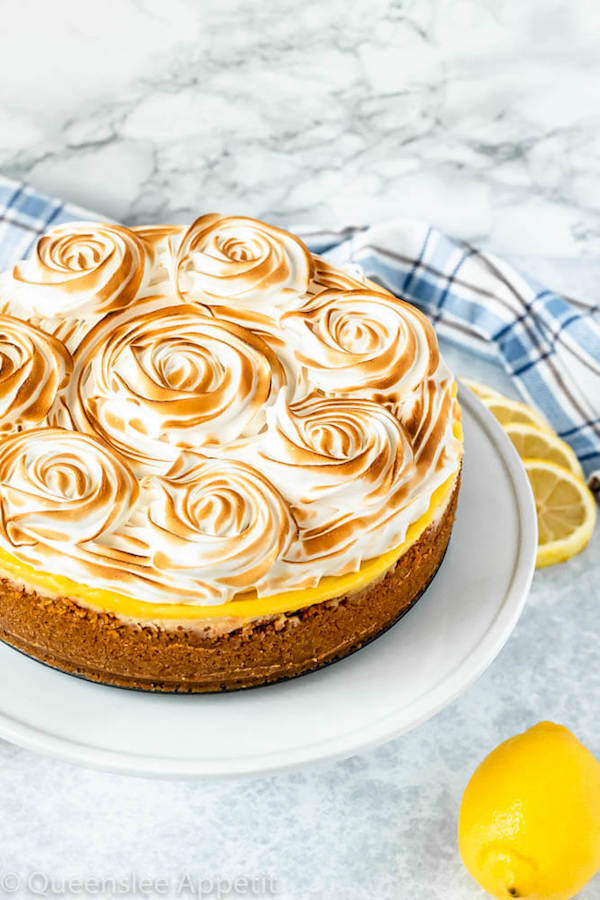 This cheesecake is heaven for a lemon meringue lover! A perfect, buttery graham cracker crust, a thick and creamy cheesecake filling loaded with lemon flavour, the best lemon curd and a super fluffy toasted meringue topping! I so wish I still had some leftover — I’m drooling just thinking about it! 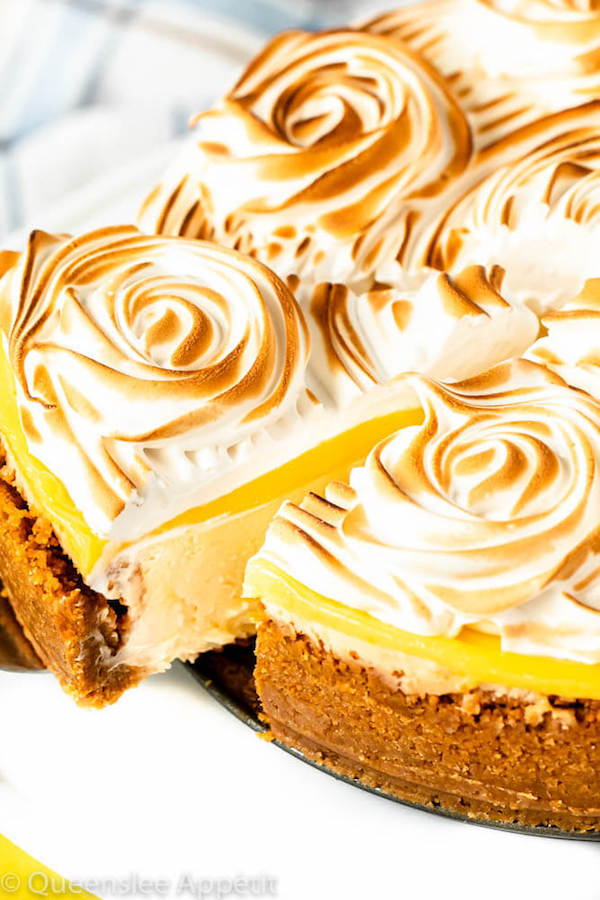 Man, oh man, this cheesecake. Did you know this was the first cheesecake recipe I had ever developed? I was so nervous back then, I was sure it was gonna fail miserably. Soggy crust, cracked, dry cheesecake, soupy meringue, I expected everything to go wrong.

But then I bit the bullet and just made it, using every single cheesecake tips and tricks I’ve learned throughout my years of amateur baking and I SUCCEEDED! The cheesecake turned out amazing, both in taste and appearance. And that’s when I realized that cheesecake is a billion times easier to make than I thought it was.

So although making cheesecake for the first time may seem intimidating, it’s actually one of the easiest desserts you can make! It doesn’t require a lot of ingredients or preparation, although it does take a long time to bake and an even longer time to chill. Ugh. But once you get that first bite of silky cheesecake bliss, it’ll be totally worth it! 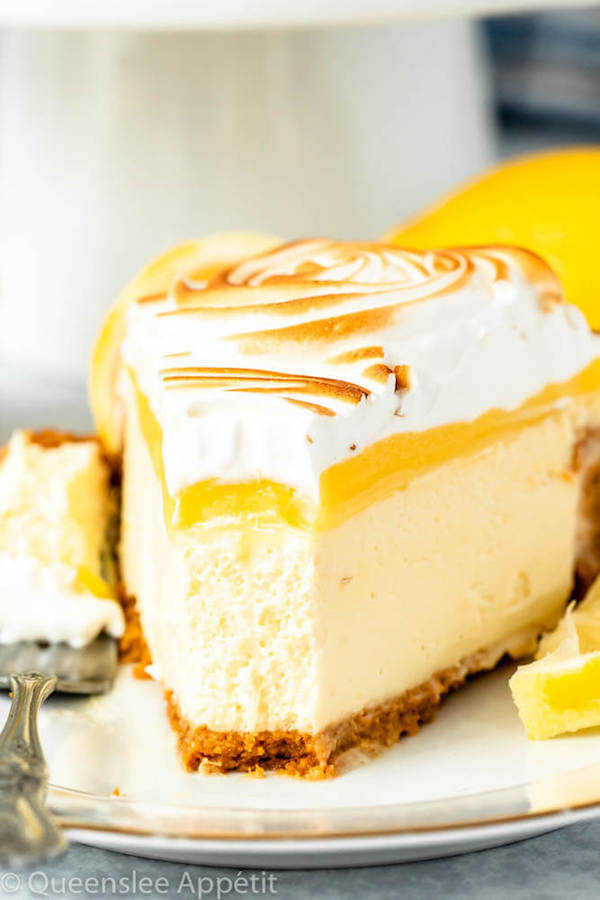 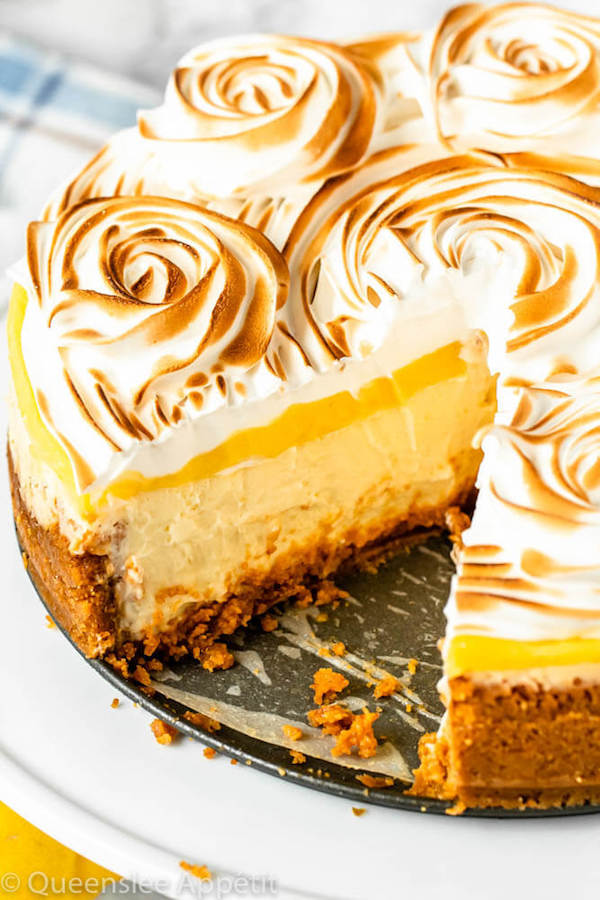 Ok so let’s get into this crazy delicious cheesecake! Starting with the crust, when I initially made this cheesecake 2 years ago, I made an all vanilla wafer crust. I totally would’ve used Vanilla Wafers again, but I was far too lazy to travel across the city to buy some, especially since I already had graham crackers at home.

But if you can, go ahead and use vanilla wafers in the crust. Those cookies are super addictive, and I could finish an entire box on my own, so just imagine how incredible they would taste at the bottom of a decadent cheesecake?! 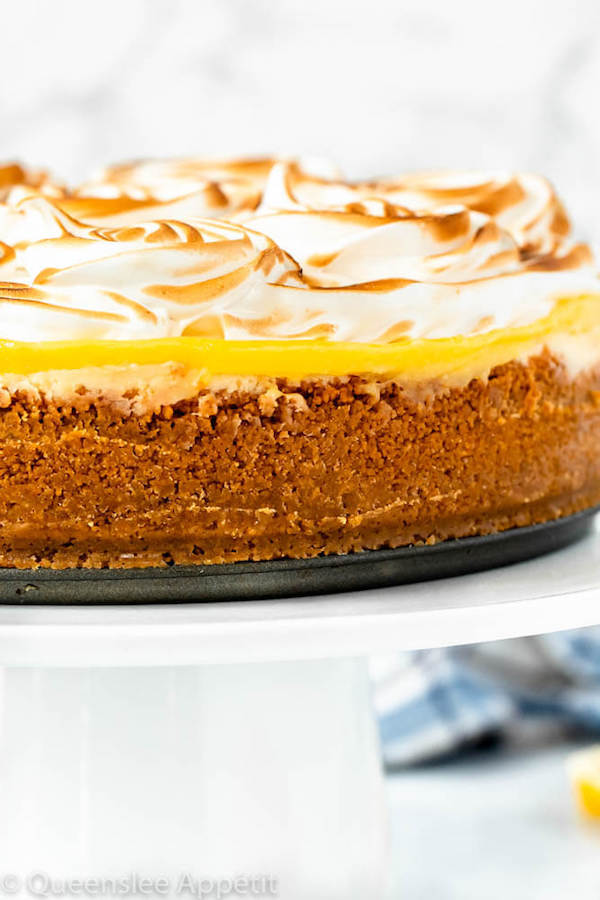 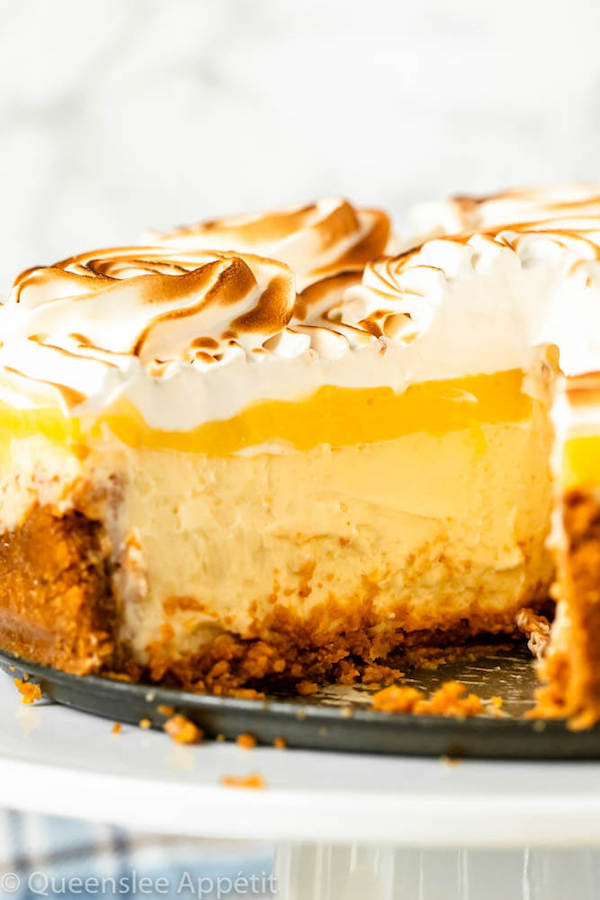 The texture of the cheesecake is incredibly velvety! You’ll need to use full-fat cream cheese, no healthier substitutions over here, sorry not sorry. I also used sour cream to add a ton of flavour and extra creaminess to the cheesecake.

We also need to add some cornstarch, which is a key ingredient that should prevent the cheesecake from cracking. Spoiler alert: my cheesecake cracked, but for an entirely different reason I’ll explain soon.

To add the lemon flavour to this lemon cheesecake, I added some lemon zest and lemon juice. Make sure you use fresh lemon juice and finely grated lemon zest. The zest should be fine enough to melt in your mouth, you don’t wanna be spitting out chunks of lemon peel after each bite. 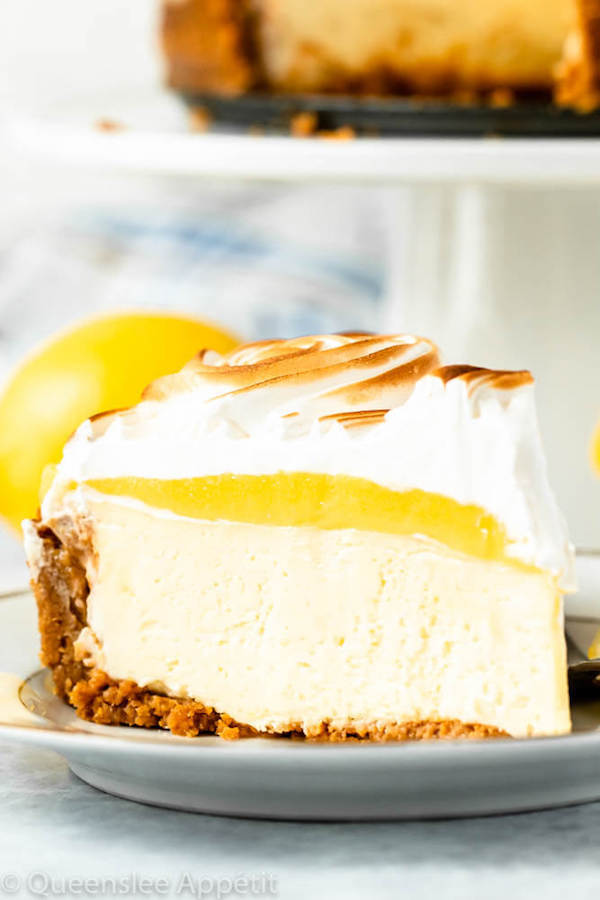 Woo hoo, crust done, filling done, now it’s time to bake the cheesecake in a waterbath! Everyone loves this part, right? I sure didn’t when I first made this cheesecake, because, as I mentioned in the original post, the water leaked into my crust!! And that wasn’t even the first time it had happened, it happened every time I made a cheesecake before then.

Now, 2 years later, I confidently bake my cheesecakes in waterbaths because I found the ultimate solution to prevent water from ever sneaking into your crust ever again! 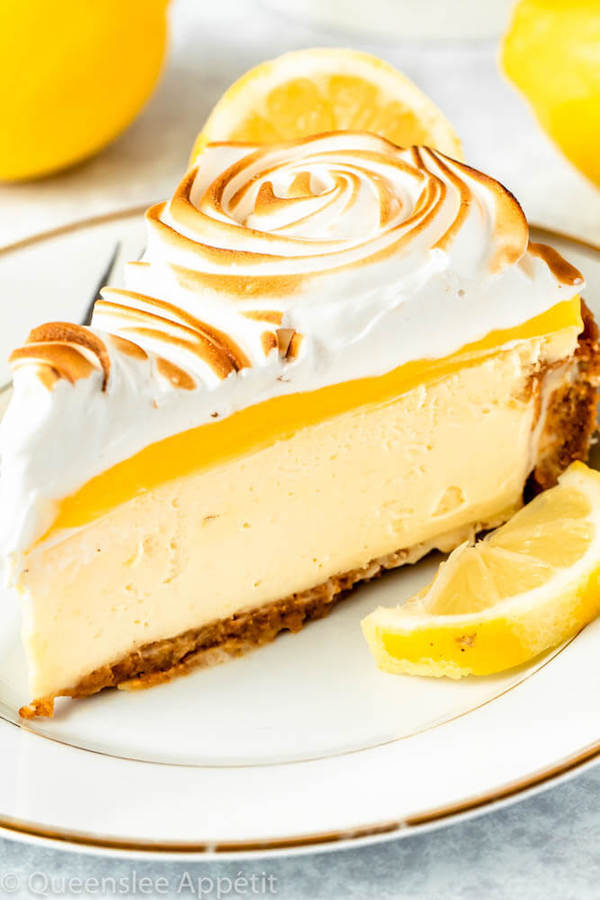 That’s right, a POT!! Just find a pot slightly bigger than your springform pan, place that pot in a bigger pan where you’ll pour in the boiling water. Water has never found it’s way into my crusts since!

When the cheesecake has finished baking, allow it to cool in the turned off oven for an hour. This slows down the cooling process which also helps prevent cracking. Remember when I mentioned that my cheesecake cracked? Well that’s because I took it out of the oven and put it straight into the refrigerator, because it was 5am and I had 0 interest in staying up for another hour waiting for this cheesecake to cool.

But the point is, I didn’t allow my cheesecake to slowly cool to room temperature like I usually do, and since it was still hot when I put it in the refrigerator, science happened and it left a decent sized crack in my cheesecake.

This should’ve disheartened me, but I felt nothing since I knew I would be covering it all up anyways! 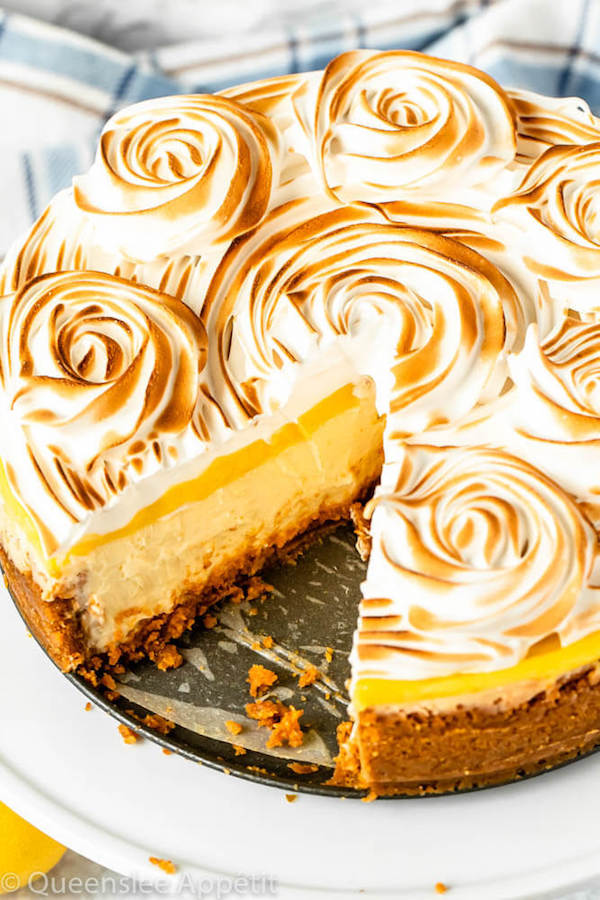 You’re gonna have to go over to my Perfect Lemon Curd recipe and make a batch while the cheesecake is cooling. Then let the curd cool to room temperature before spreading on top of the cheesecake. You can also whip up the curd a few days ahead of time and store it in the refrigerator until you’re ready to use it.

The lemon curd really adds a lot to this cheesecake. It’s decadent, smooth and a perfect addition to an already fantastic dessert. I think this cheesecake would be amazing with just the lemon curd alone, but today is Lemon Meringue Day so we gotta add meringue of course! 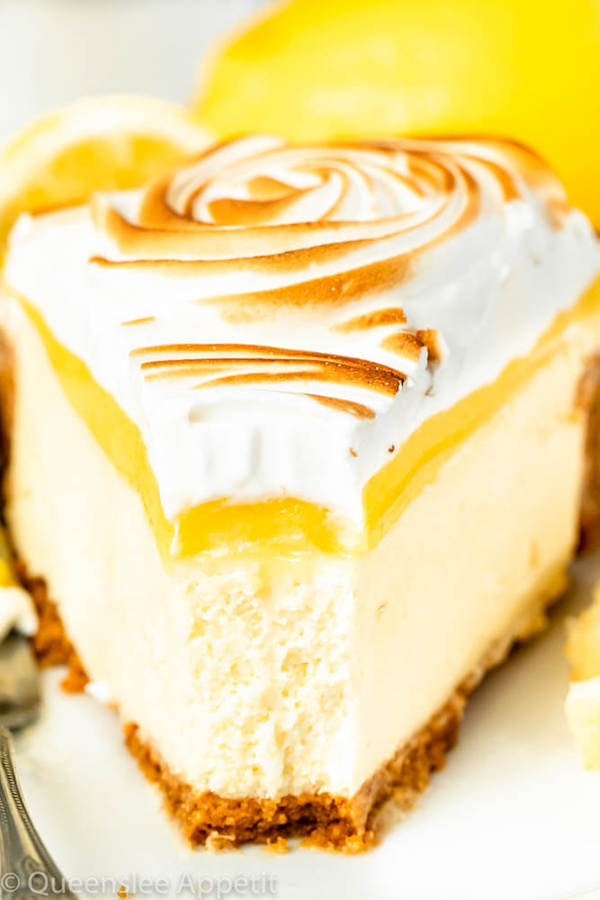 Oh my God, I’m in love with meringue! Who knew egg whites and sugar could be so darn tasty when combined?

This meringue is made differently from your classic lemon meringue pie topping. For lemon meringue toppings, you need to whip up the egg whites with a bit of sugar, spread it on top of the pie, then bake it in the oven.

You will know it’s ready when the sugar is completely dissolved. Then you want to whip up the hot sugary egg whites in a stand or hand mixer for a few minutes until it becomes a white, fluffy, cloud-like meringue!

The piping design I used was inspired by Passion For Baking. To re-create her design, I transferred the meringue to a piping bag fitted with a large star tip and piped a swirl starting from the centre and working my way out to the edge. I then piped beautiful rosettes in the centre and around the edges. You could do any piping design want, or you could just pile all of the meringue on top of the cheesecake like you would with a regular lemon meringue pie.

Instead of baking the meringue, I toasted it with a kitchen torch. The toasted meringue topping makes this cheesecake look absolutely gorgeous! It also brings out the details in the piped design, I love it! 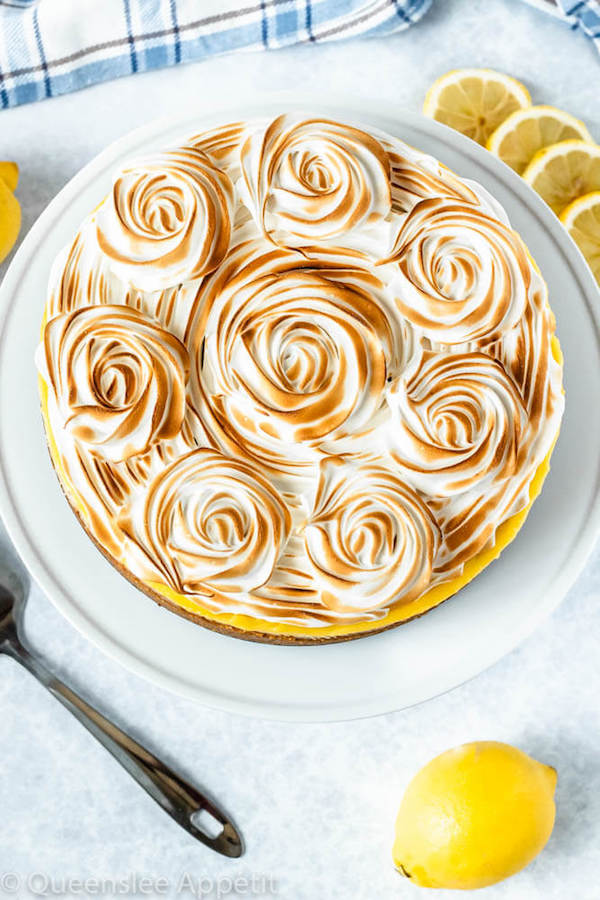 If lemon meringue pie is one of your dessert obsessions, you must try this Lemon Meringue Cheesecake! Even if it isn’t, you should still give it a try. Trust me, I’m not the biggest lemon fan in the world, yet I can still admit this is one of the best cheesecakes I’ve ever made! 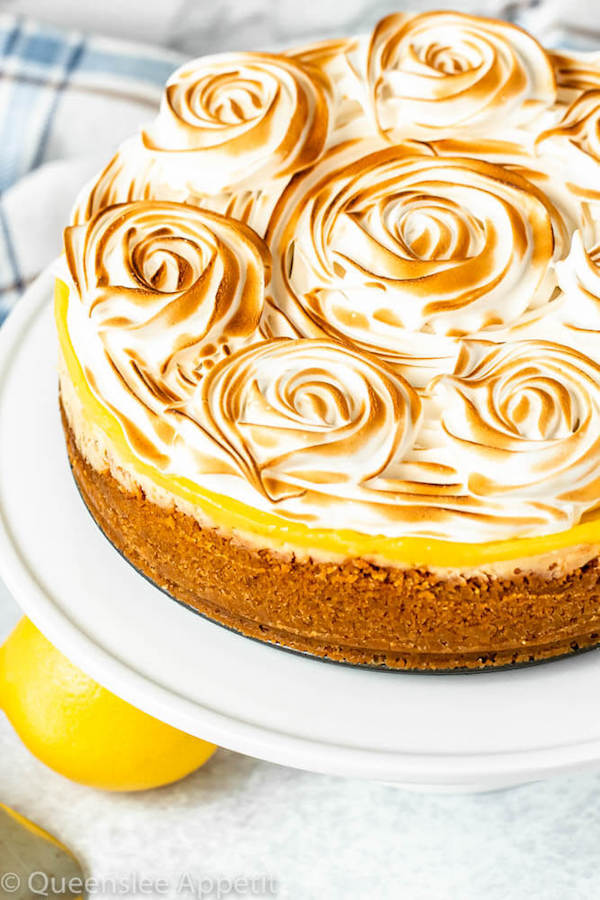 Did you make this Lemon Meringue Cheesecake? Let me know how they turned out in the comments below! And don’t forget to leave a rating!

These Lemon Meringue Sugar Cookie Sandwiches are made with a soft and chewy lemon sugar cookie and a ring of toasted meringue that is filled with creamy lemon curd. The perfect dessert for Summer! 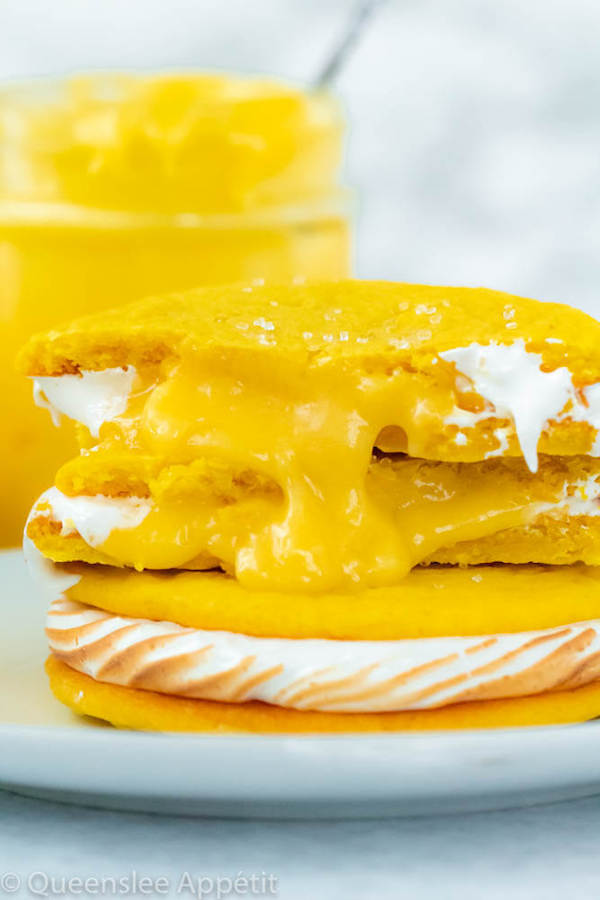 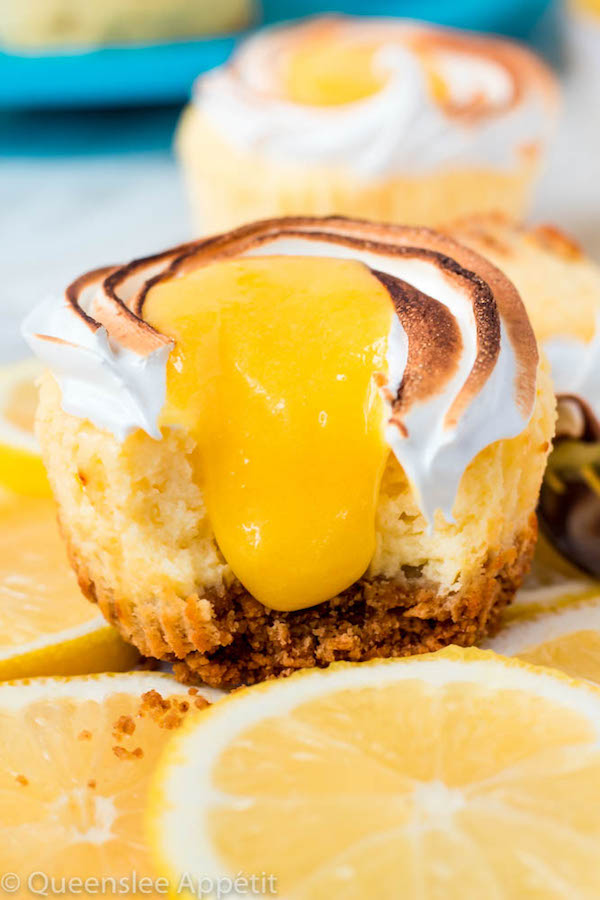 For the Lemon Cheesecake:

For the Meringue Topping:

Assembly of the Lemon Meringue Cheesecake: 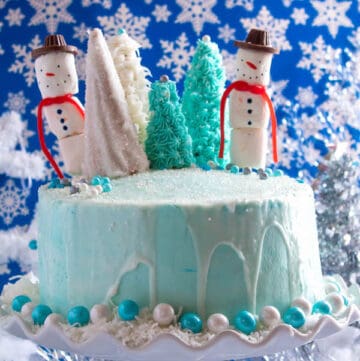 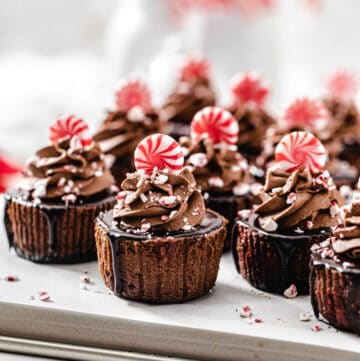 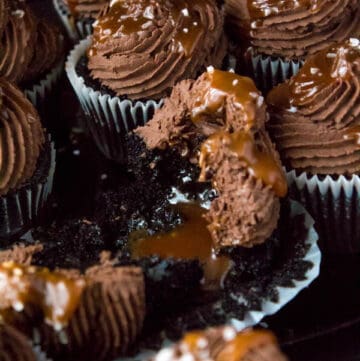 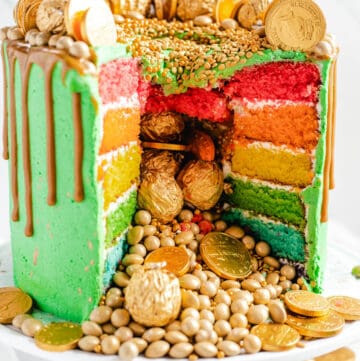