These Mini Melting Witch Cheesecakes are cute, fun and easy to make. They're the perfect dessert to serve at your Halloween party! 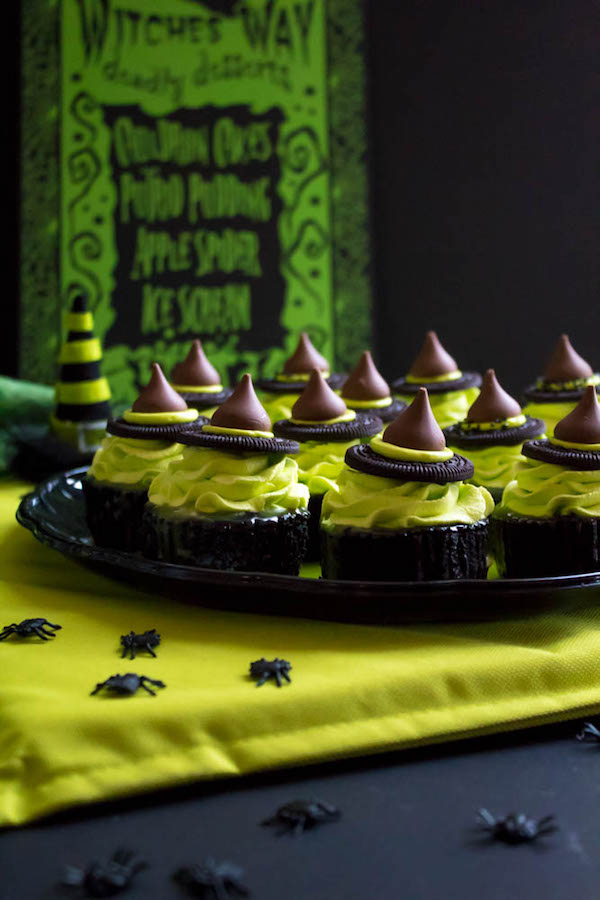 Finally, a Halloween recipe! I know, I know, I'm late. Halloween is less than 2 weeks away, but I was so focused on making the perfect birthday cake, that I completely forgot about Halloween! 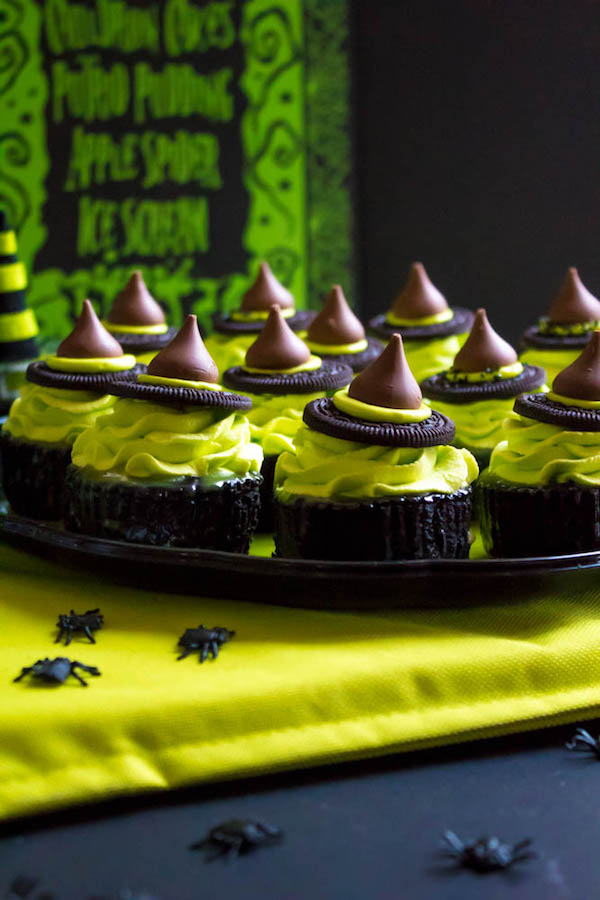 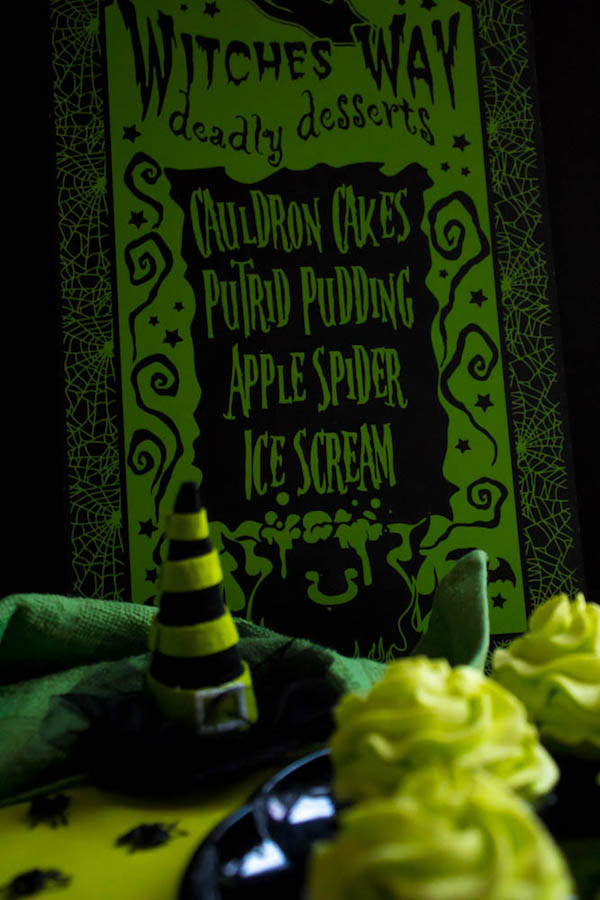 Halloween is hands down my FAVOURITE holiday! I'm obsessed with all things horror, so it's only natural that I'd love a day dedicated to it. Other than the scary stuff - my favourite parts about Halloween are the candy and the adorable themed treats!

This year I decided to create my own spooky Halloween treats and share them with all of you! So today I present to you: Mini Melting Witch Cheesecakes! 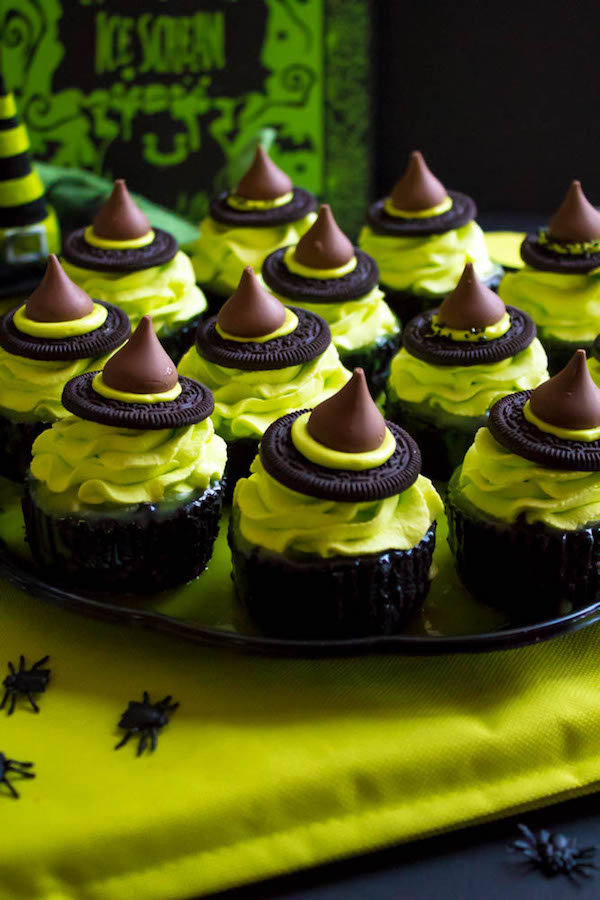 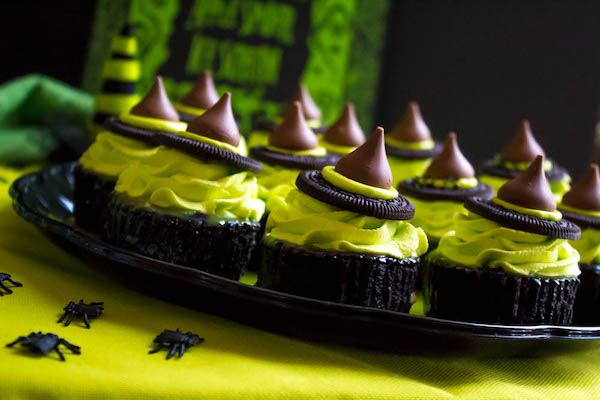 These Melting Witch Cheesecakes are obviously inspired by the classic scene from Wizard of Oz. I know it's not a Halloween movie, but melting witch desserts have become one of the most popular Halloween treats, so I just had to make my own! 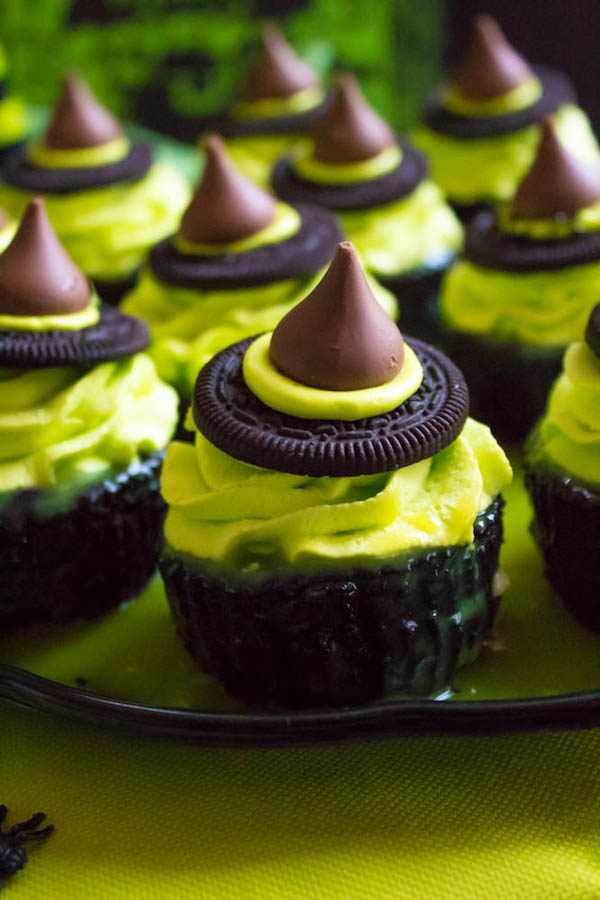 I came up with this dessert at the very last minute, so I'm impressed with how great they turned out!

I wanted the theme for these cheesecakes to be black and green, like the wicked witch herself. So to begin, I made a simple Oreo crust (because, black). 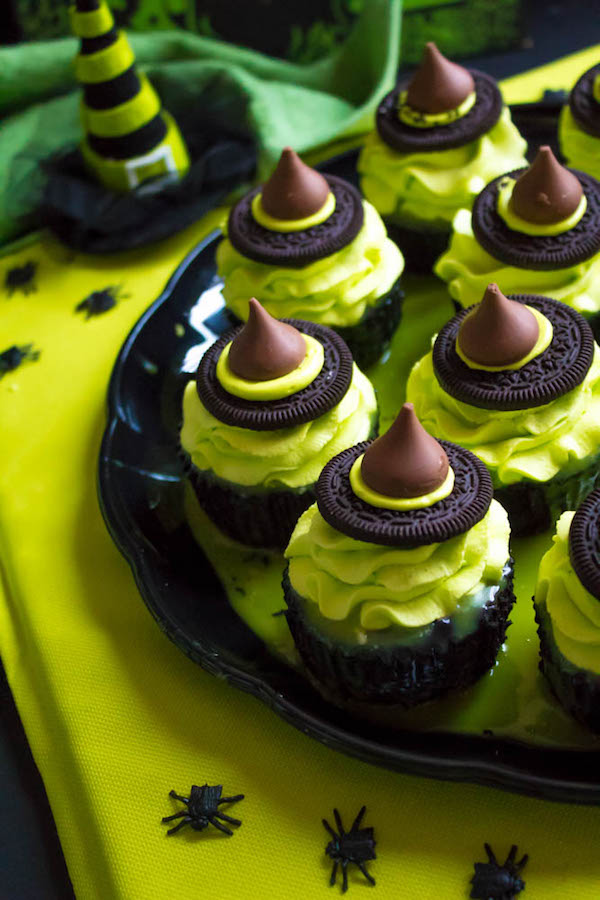 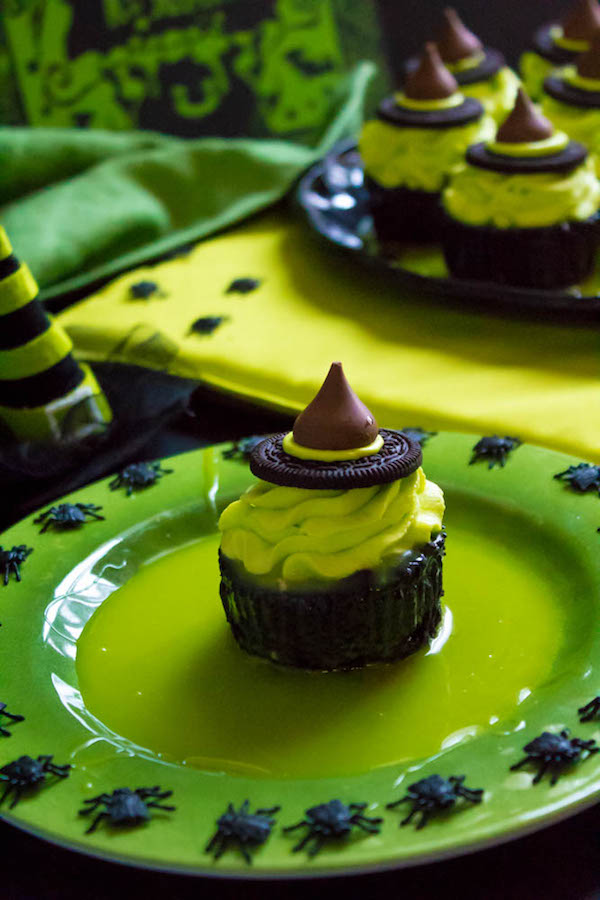 The filling itself is a creamy chocolate cheesecake that I dyed black to represent the witches outfit. I recommend using Americolor or Sugarflair Extra-Black to achieve that super black colour. If you used a low-quality black food colouring, you would need to add a lot to achieve the perfect shade of black. Doing this would effect the taste of your cheesecake, and although it'll still look good, we want them to TASTE good too!

So using a good quality black gel food colouring will allow you to get that nice black colour without needing to use too much. 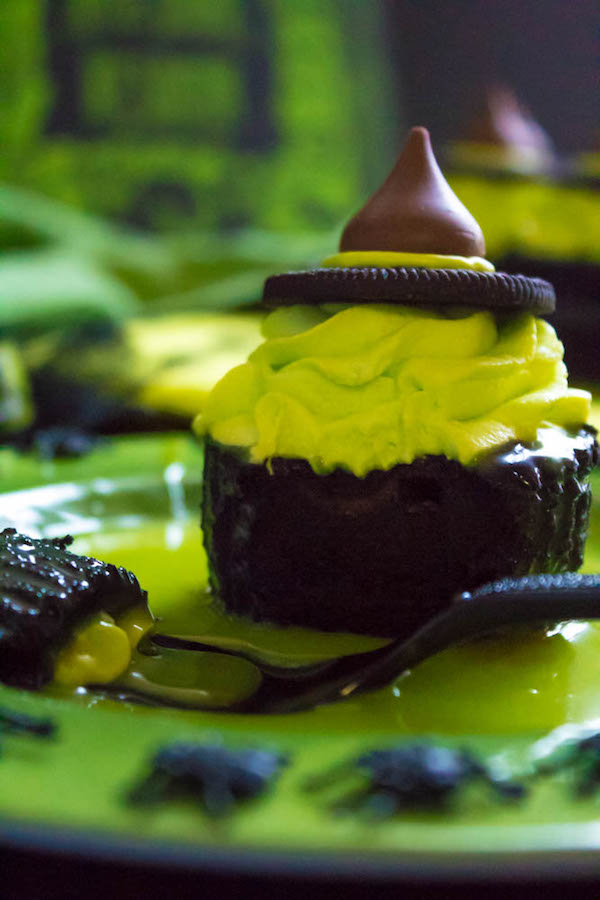 Now you can't have a melting witch dessert without, well, a melting witch! To create the melting effect, I made a simple white chocolate ganache, then dyed it green using neon green food colouring. I have mixed feelings about the ganache. It's pretty hard to see the melting drips due to the super black cheesecake. At the same time, the way it pools onto the platter and around the cheesecakes is absolutely perfect and adds a lot to the "melting" effect! 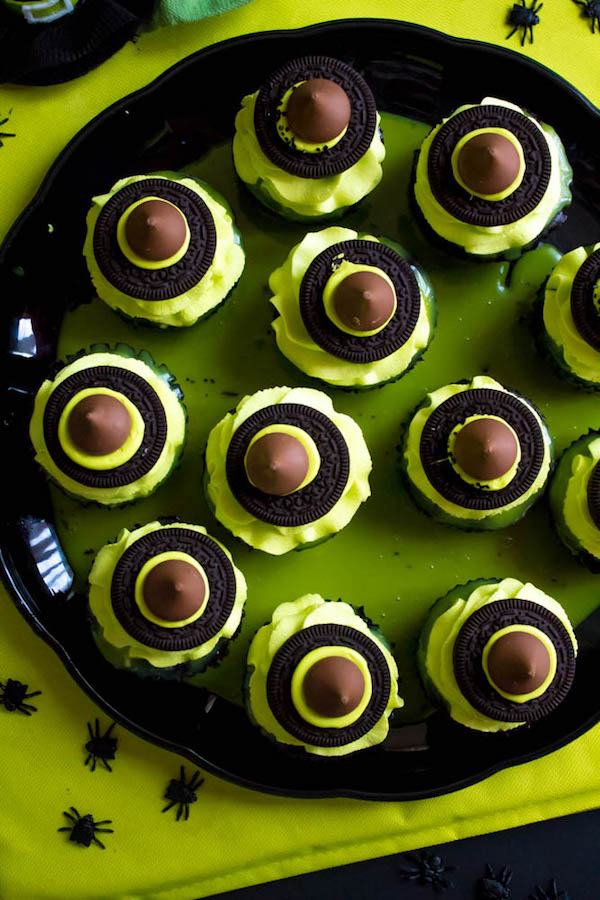 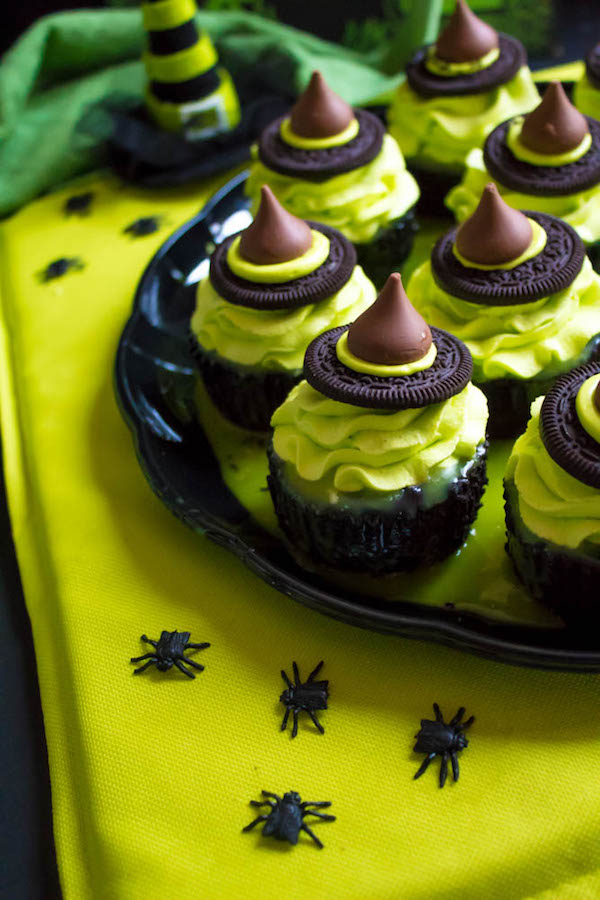 If you want the drip to be less messy, you can exclude the heavy cream and melt the white chocolate on its own, then dye it green. It really doesn't matter how neat or messy your melted witch is - as long as it looks like she's melting, it should be fine. 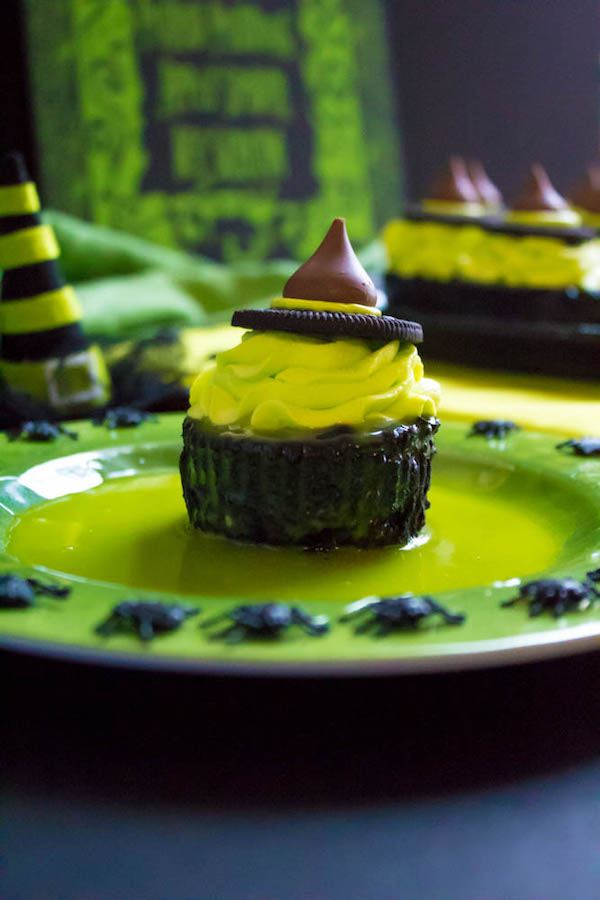 I then topped these babies with a swirl of whipped cream dyed green. This is meant to be the witches head, a.k.a. the part of her that hasn't melted yet. I like to imagine these cheesecakes are shouting "I'M MELTING, I'M MELTING!" 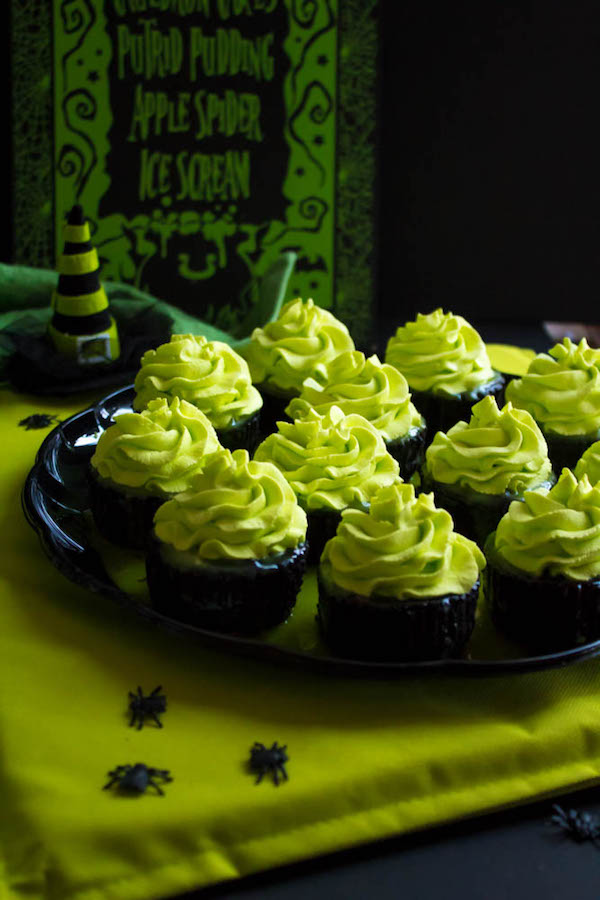 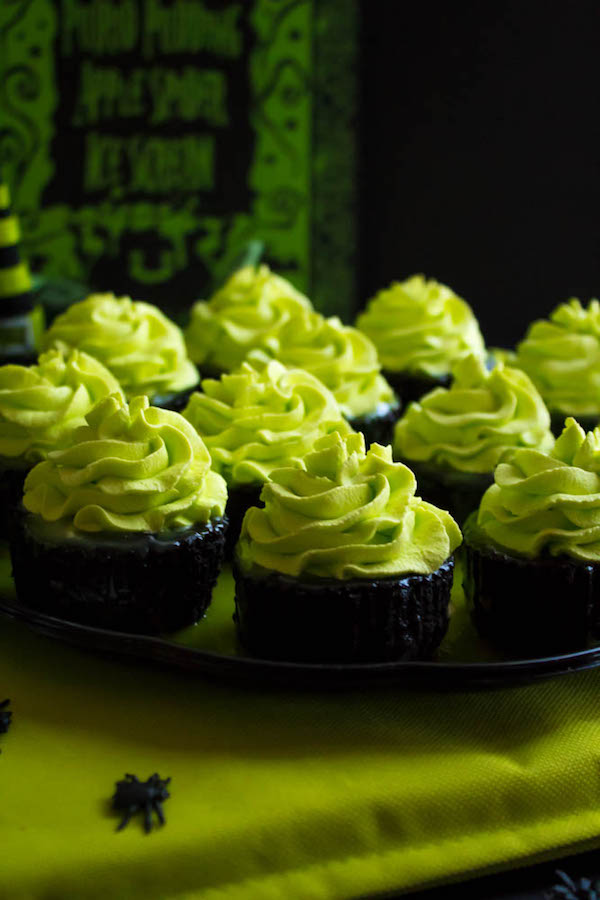 A witch isn't a witch without her hat, so I topped each cheesecake with a classic pointed witches hat. To make the witch hat, I dyed a little bit of store-bought frosting green. Then I piped a dollop of frosting in the centre of an Oreo wafer and topped it with a Hershey's Kiss chocolate.

The witches hats really tie this dessert together. They're just the cutest little things! 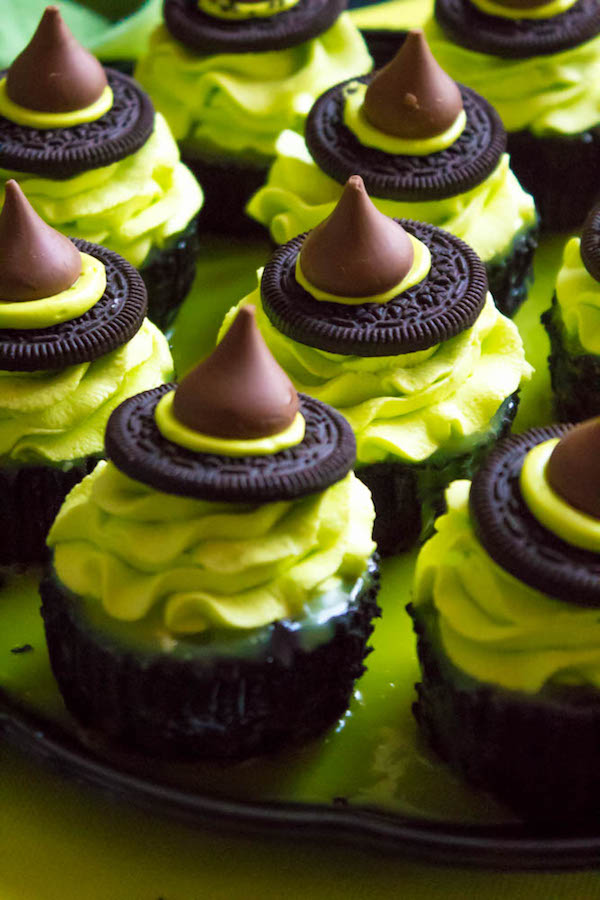 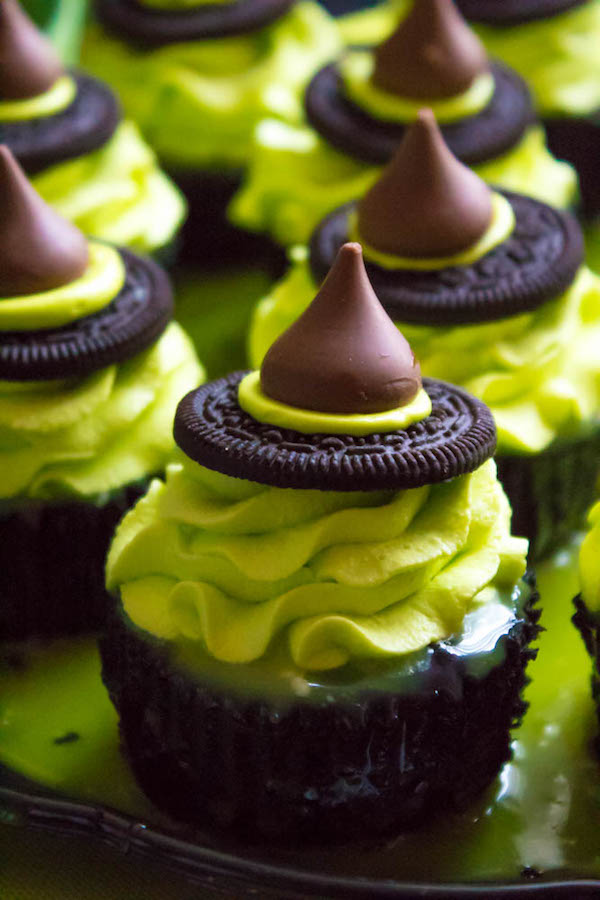 These adorable bite-sized witch cheesecakes would be the perfect addition to your next Halloween party! Enjoy! 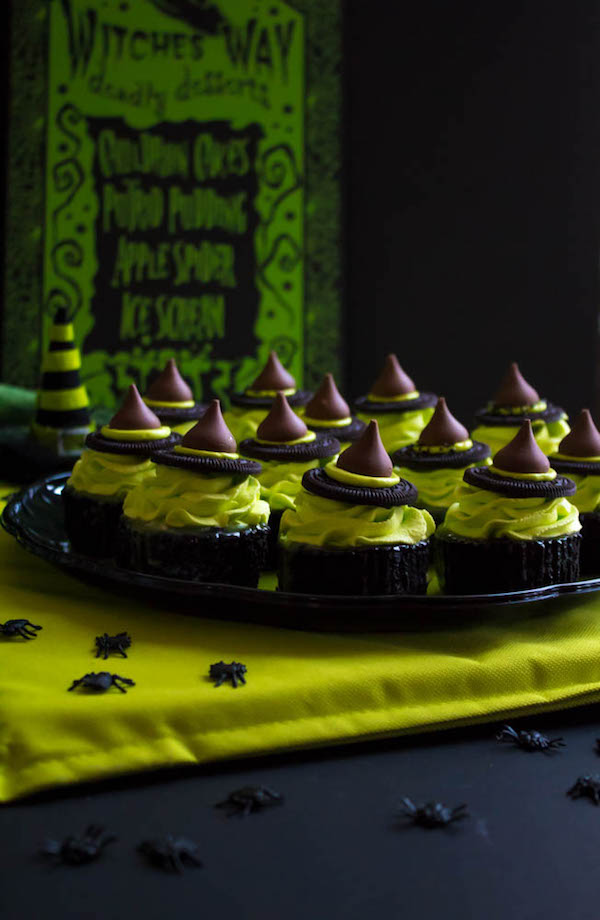 For the Green Slime:

For the Witches Hats:

For the Green Whipped Cream:

1) Cheesecakes can be stored in an airtight container in the refrigerator for up to 3 days.

2) For the green slime, feel free to exclude the heavy cream and melt the white chocolate on its own, then dye it green.

3) I recommend assembling these cheesecakes on the platter you plan to serve them on. The slime melting and pooling around the cheesecakes adds a really great "melted witch" effect.


Did you make a recipe? I'd love to see how it turned out! Follow me on Instagram and use the hashtag #queensleeappetit so I can see all of the Queenslee Appétit recipes you've made!

©All images & content are copyright protected. Please do not use my images without prior permission. If you want to republish this recipe, please re-write the recipe in your own words, or link back to this post for the recipe. 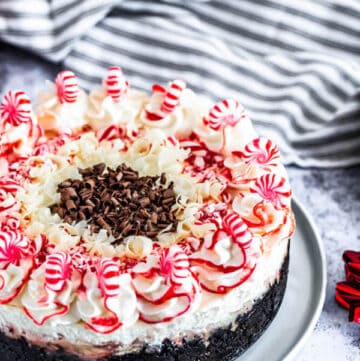 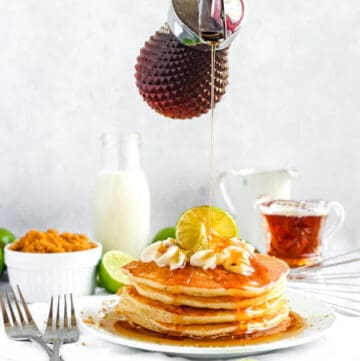 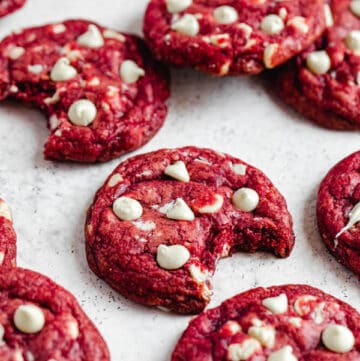 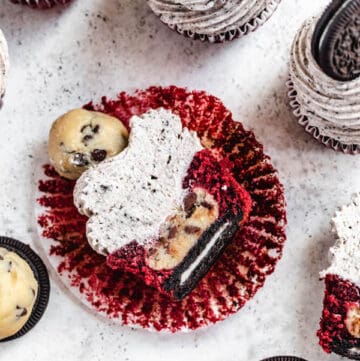