Classic Canadian Nanaimo Bars in Brownie form! These Nanaimo Bar Brownies feature a fudgy brownie loaded with coconut, graham cracker crumbs and walnuts, a sweet custard filling and rich chocolate on top! This twist on the classic dessert is perfect for Canada Day! 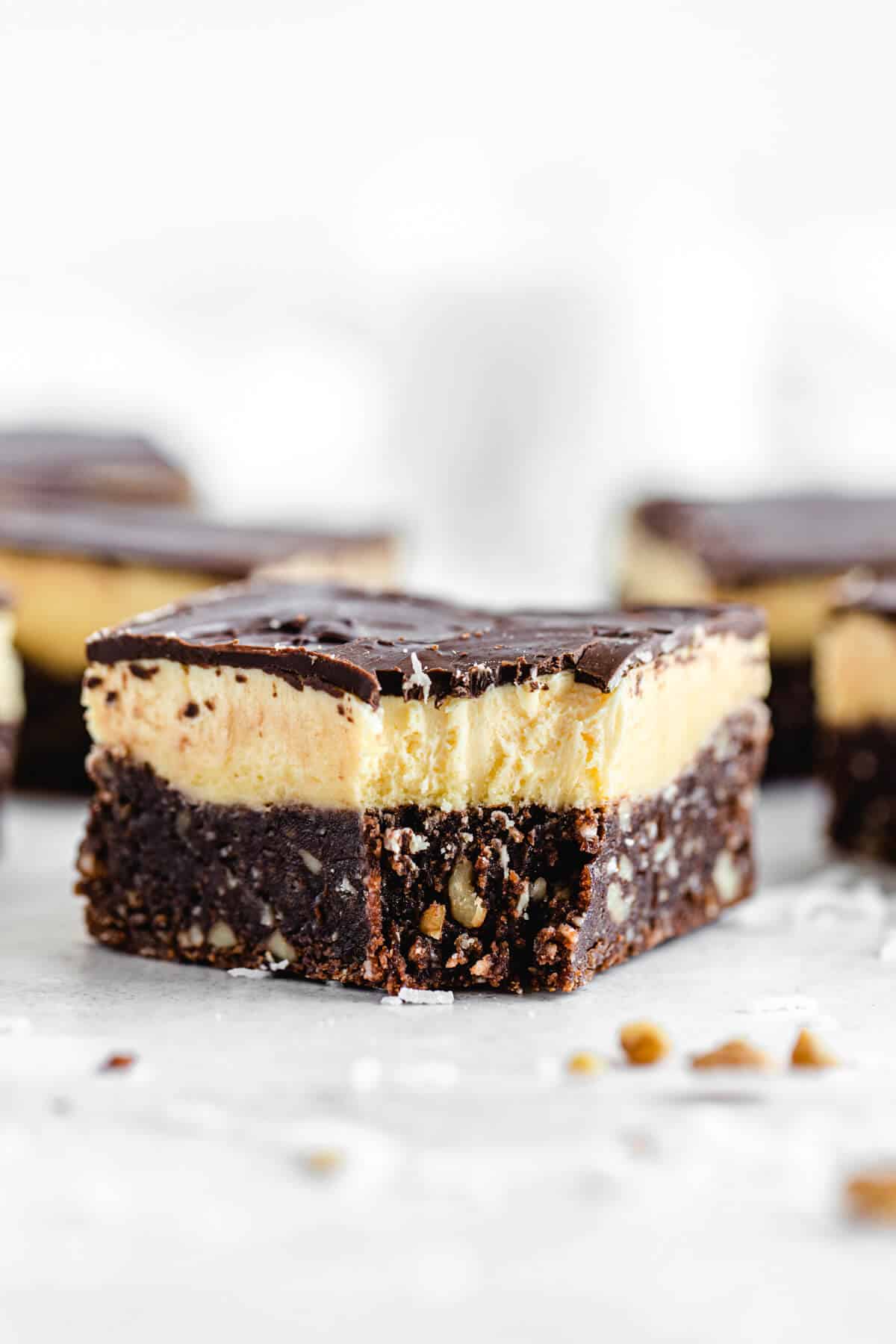 What are Nanaimo Bars?

So Canada Day’s coming up! And one of the most popular Canadian desserts is Nanaimo Bars. But what exactly are Nanaimo Bars?

Well, back in 1953, a no-bake recipe named “Nanaimo Bars” (named after the city Nanaimo in British Columbia, appeared in a cookbook. This recipe was then featured in many different publications as different names:

All of these recipes were similar to the Nanaimo Bar, but where did they originate? No one really knows! Some say the first recipe was published in the 1930’s others say the bars existed all the way back in the 19th century!

Wherever they came from, they’re now a Canadian classic and a favourite amongst most of the people in our country. 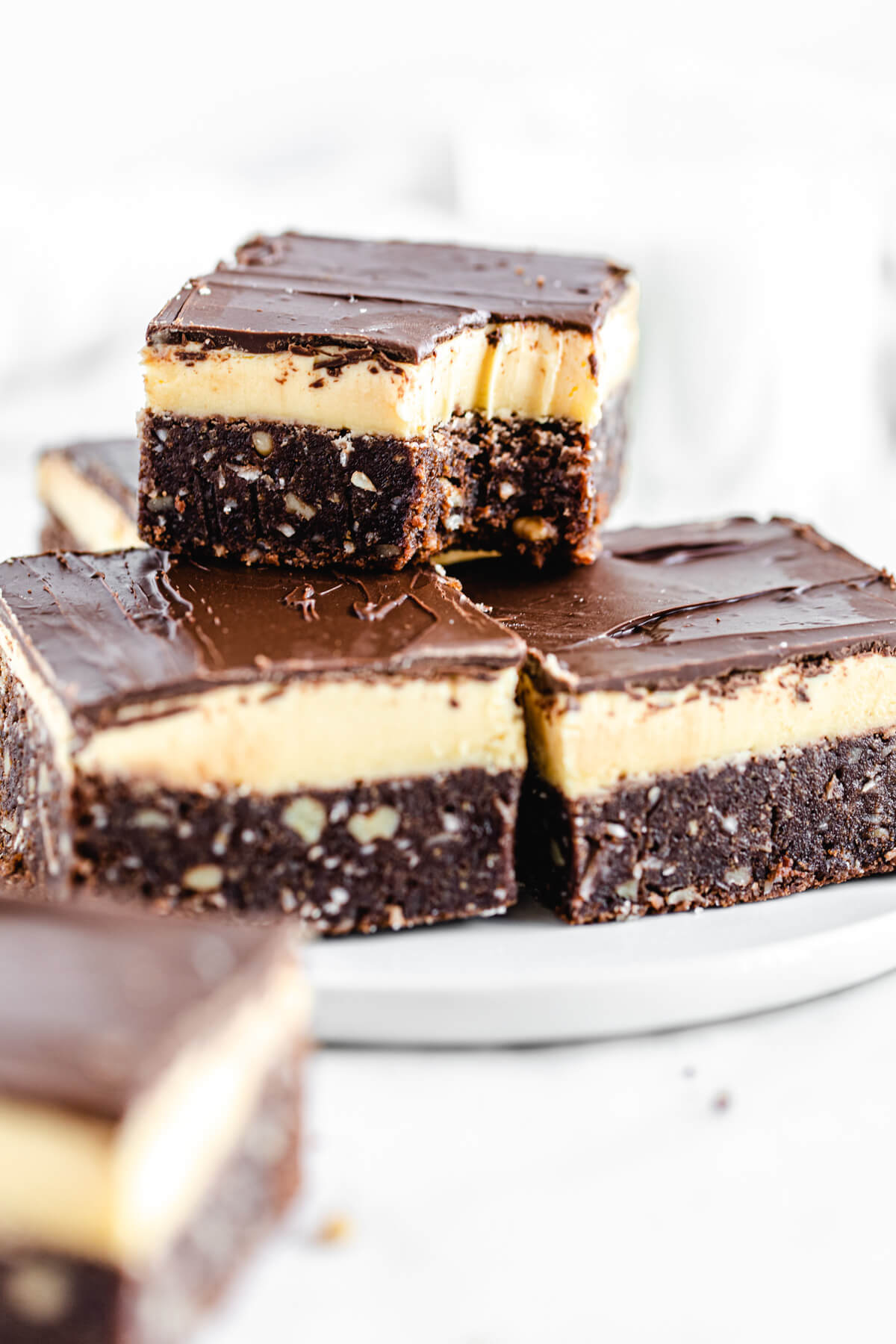 What’s in a Nanaimo Bar?

The crunchy chocolate base is loaded with graham cracker crumbs, coconut and walnuts. The custard filling is a frosting made with Bird’s Custard Powder. This may sound delicious to most of you, but these 2 layers are the reason why I’ve always disliked these bars.

It’s no secret that I don’t like and will never like coconut. Not only the flavour, but the texture just doesn’t sit right with me. I’ve also never been the biggest fan of custard growing up, and found the custard buttercream filling to be too sweet.

Because of this, I stayed away from making a Nanaimo Bar recipe for the blog, until I thought of the genius idea to create a brownie version! 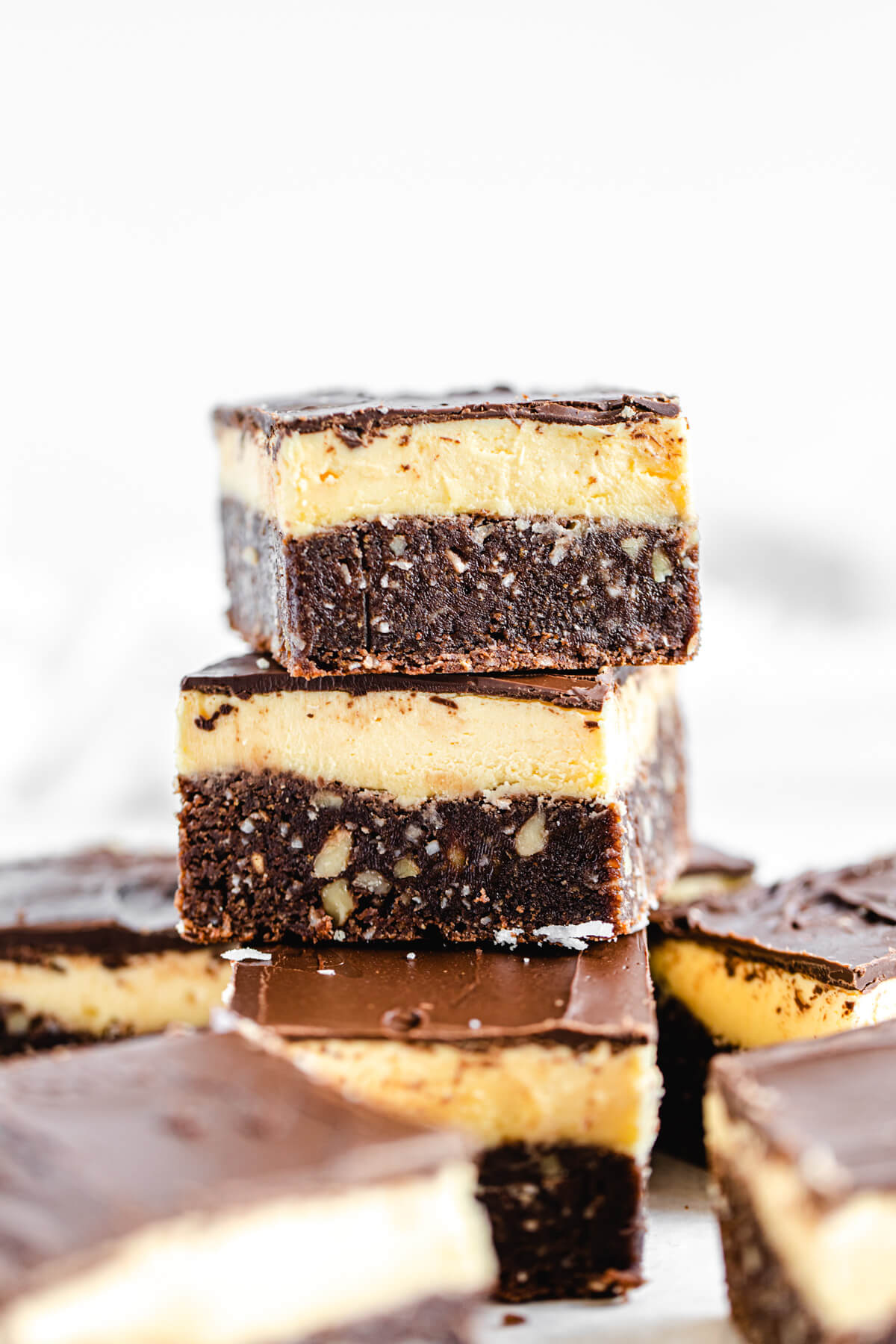 Today we’ll be taking the traditional Canadian Nanaimo Bar and turn them into brownies! It’s so funny because, although I dislike Nanaimo Bars for the reasons above, I managed to eat these brownies without cringing! That’s because the thick, fudgy brownie made the coconut texture a lot more bearable for me!

3 Parts to these Brownies 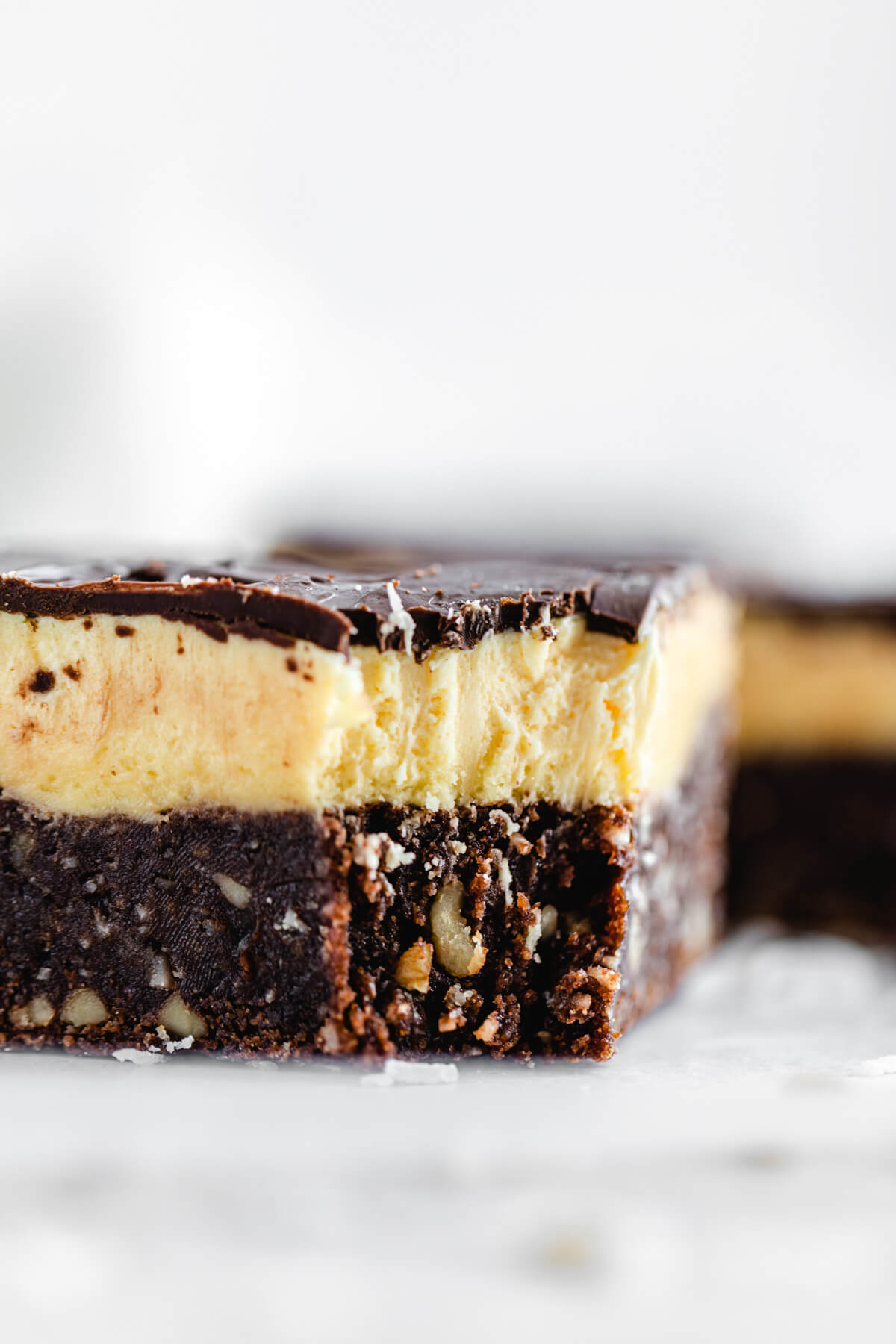 I’ve gone into detail about these brownies in just about every post I’ve used them in, so I won’t be doing so today. You actually don’t have to use my homemade recipe if you don’t want to, this recipe will work just fine with a box mix.

However, my homemade brownies have a much better texture and flavour than a box mix, so if you have the time and ingredients, I totally recommend making it! So to make these normal fudgy brownies NANAIMO brownies, we’ll be stirring in graham cracker crumbs, shredded coconut and chopped walnuts! 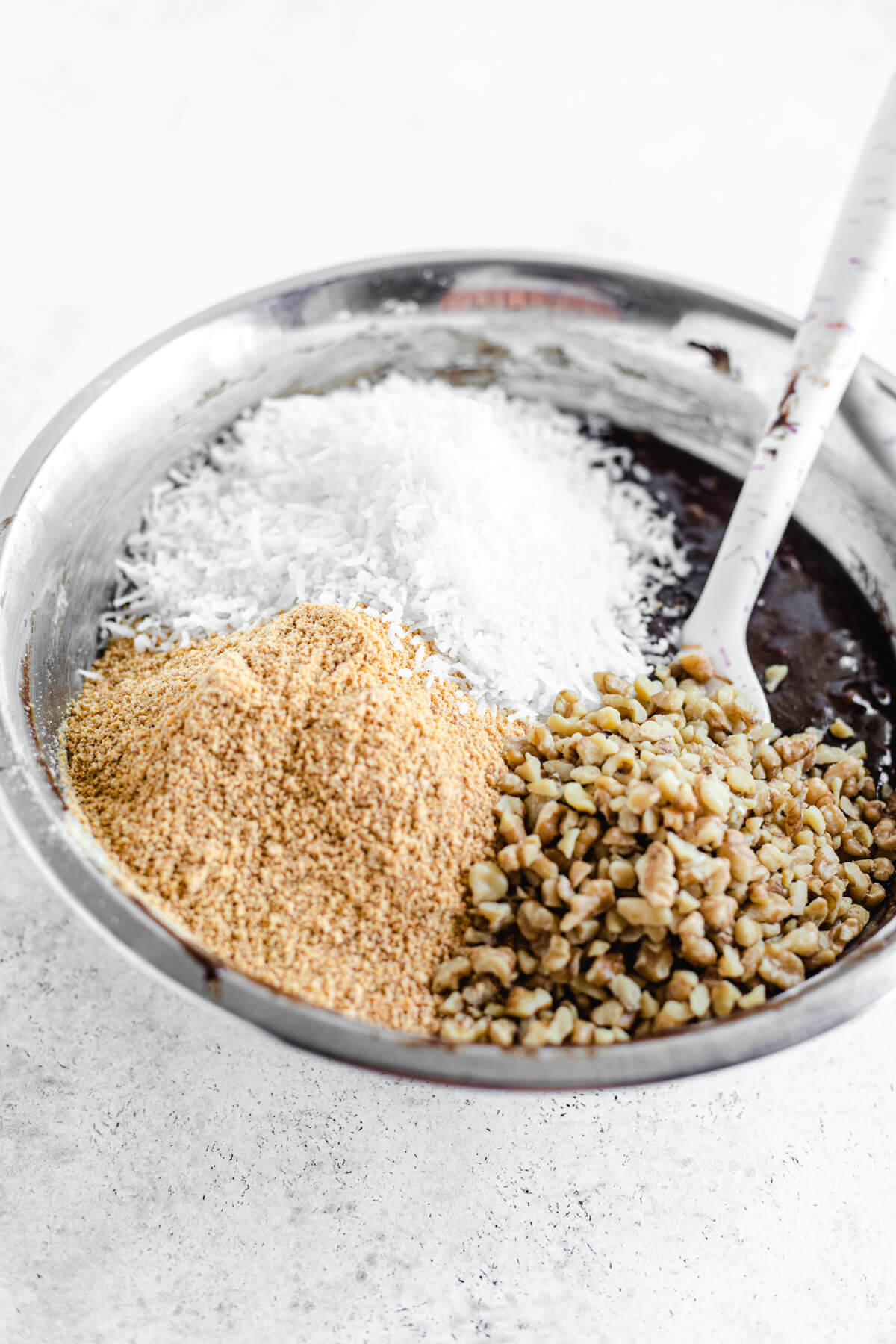 Looks like a lot, right? You’ll have to work slow when folding everything in, but eventually it will all be incorporated. The graham crackers will blend right in to the brownie so you won’t really get a crunch from them, but you will get a nice crunch of walnuts along with the shredded coconut.

Bake the brownies, then allow it to cool COMPLETELY before you spread on the custard filling or else it will melt. 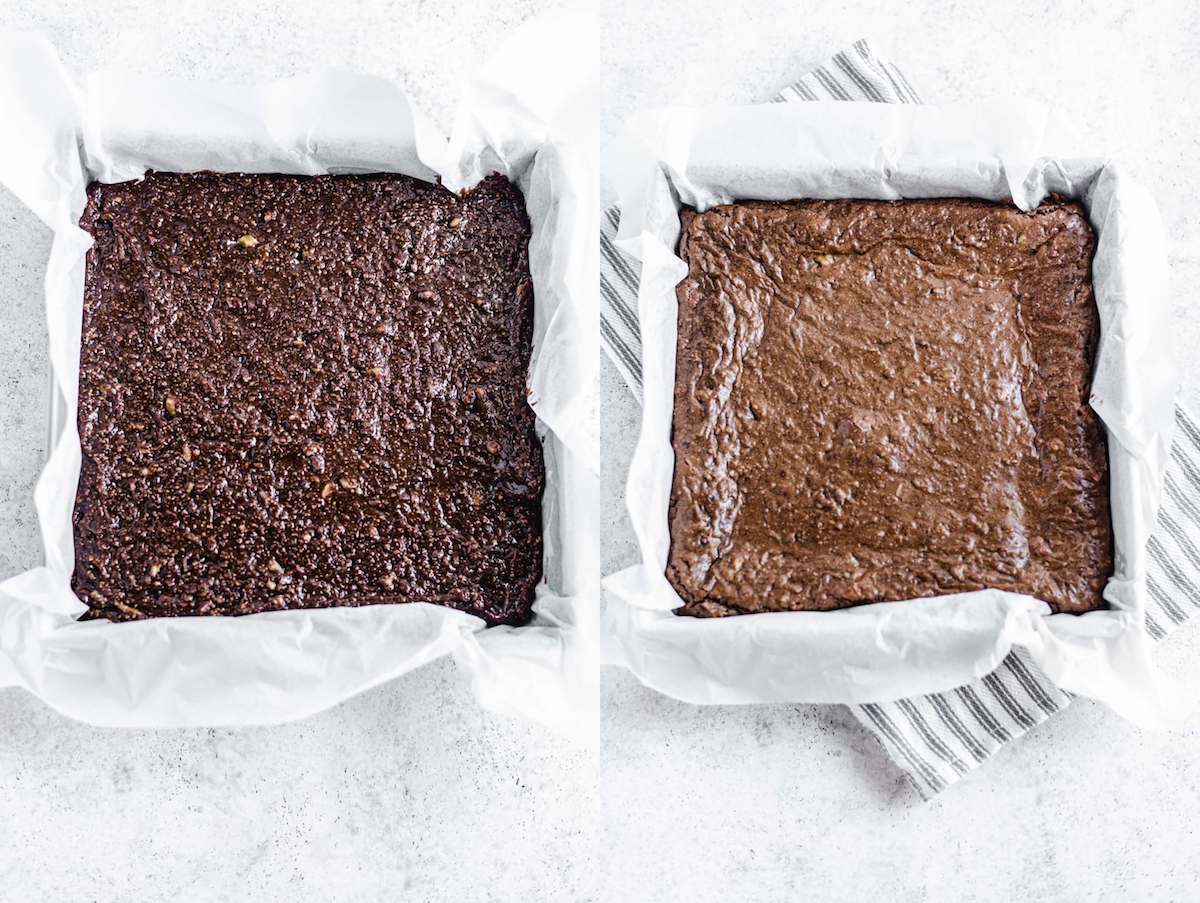 This is pretty much a custard-flavoured buttercream frosting. The custard filling gets its flavour, creamy texture and light yellow colour from custard powder. Custard powder may not be easy for everyone to find, so you can substitute with the same amount of vanilla pudding powder, but it won’t have the same taste as a true Nanaimo bar.

To make the custard buttercream, start by beating the butter until creamy. Then we’ll add in some milk and custard powder. The buttercream will be a orange/yellow colour at this point. Add in the powdered sugar 1 cup at a time, then once it’s all combined, continue to beat on medium-high speed until the frosting lightens in colour and gets ultra fluffy!

Spread it onto the cooled brownies, then let it chill in the refrigerator. Few hours or overnight. You want the middle to hold its shape when sliced, so make sure it’s solid before adding the chocolate topping. 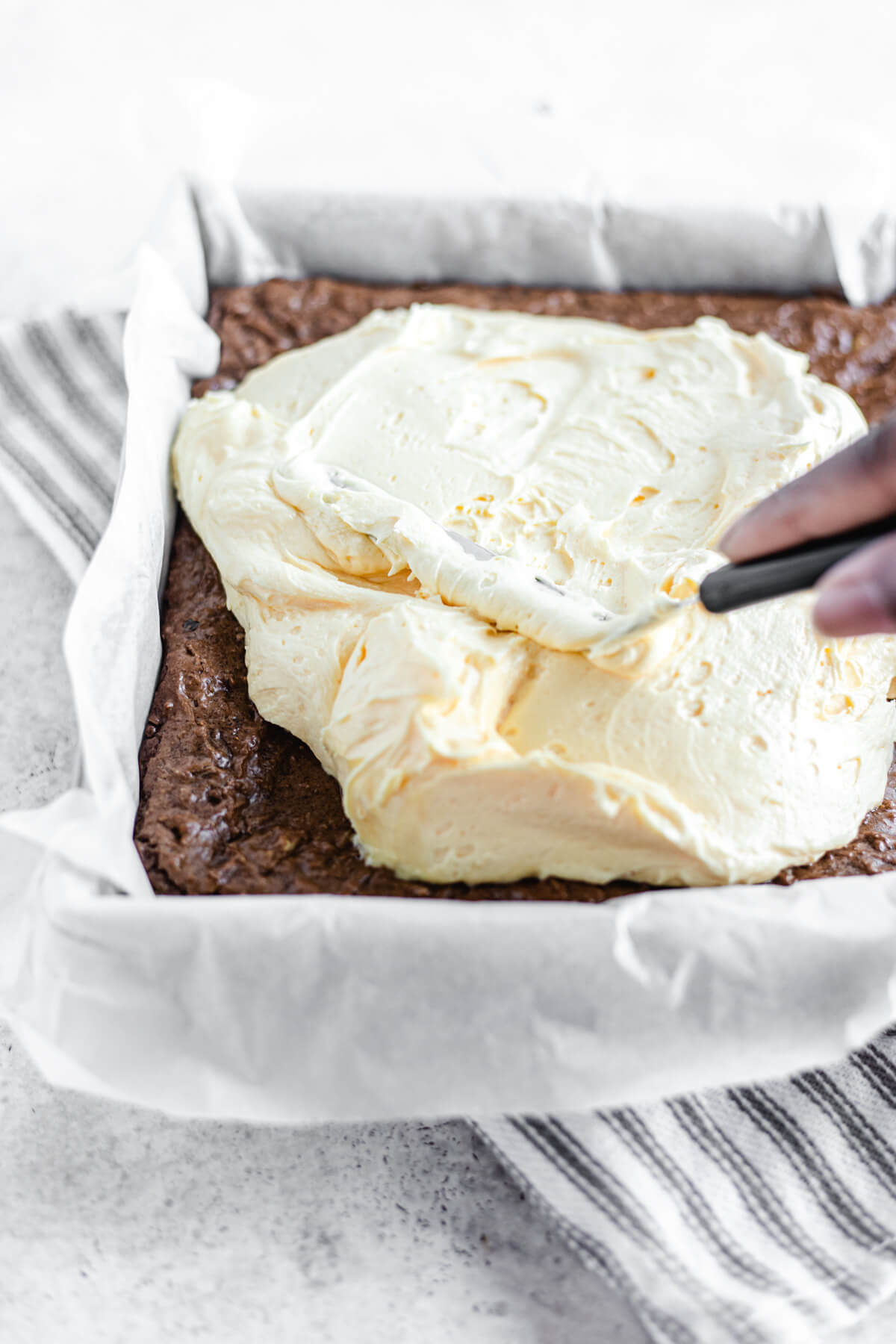 Melt together chocolate and shortening for the chocolate topping. Some use butter or oil, but I chose to use shortening. The reason we add one of these 3 things to the chocolate is to make slicing easier.

Because the custard buttercream was so cold, my chocolate began to set up immediately, but you should let it sit in the refrigerator for at least 10-15 minutes to ensure it’s completely set. 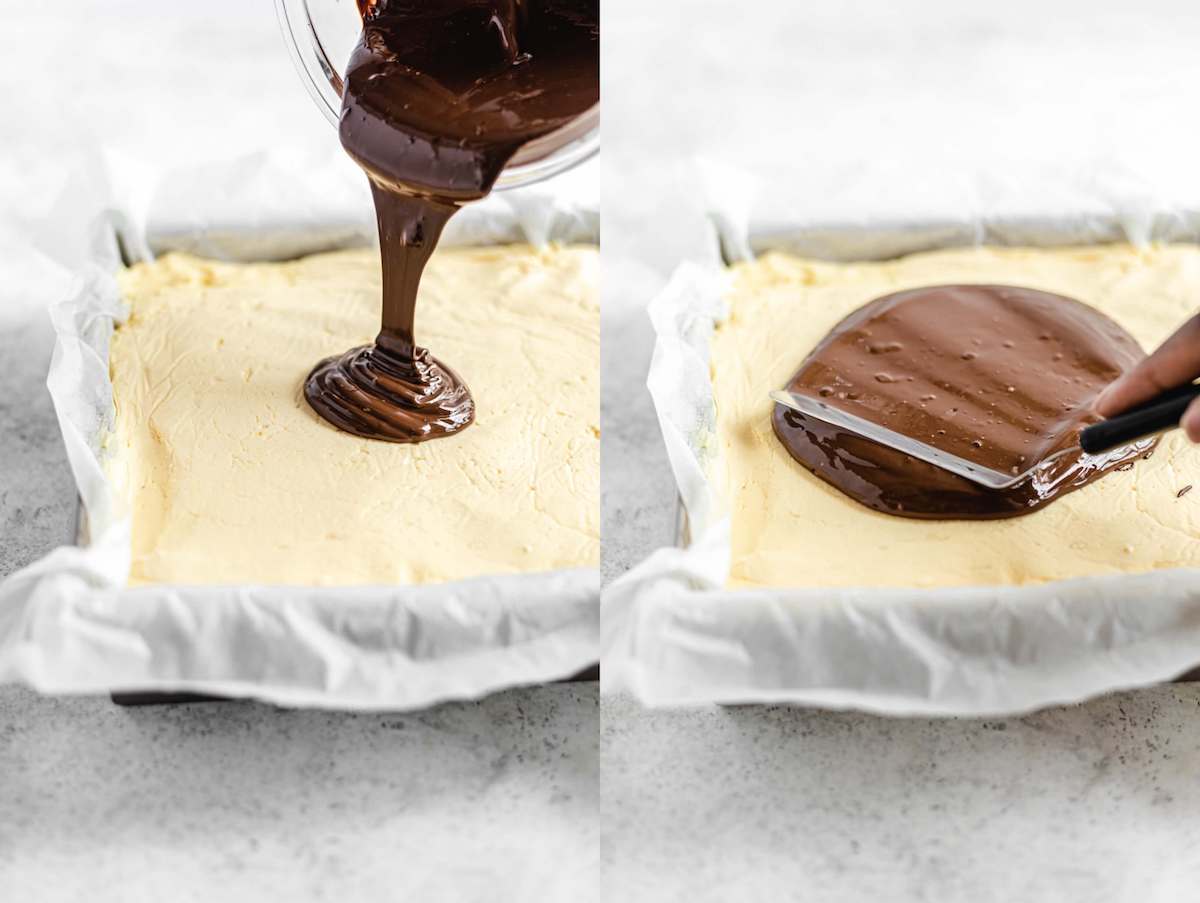 To slice the bars, I used a clean ruler and a knife to score the top of the chocolate. Then I gently stuck the knife into the centre of one line and slowly pushed it down to cut one side of the row, then repeat on the other side. I cut each row into 3 bars to get a total of 9, but you can slice them into smaller portions if you want to feed a crowd. 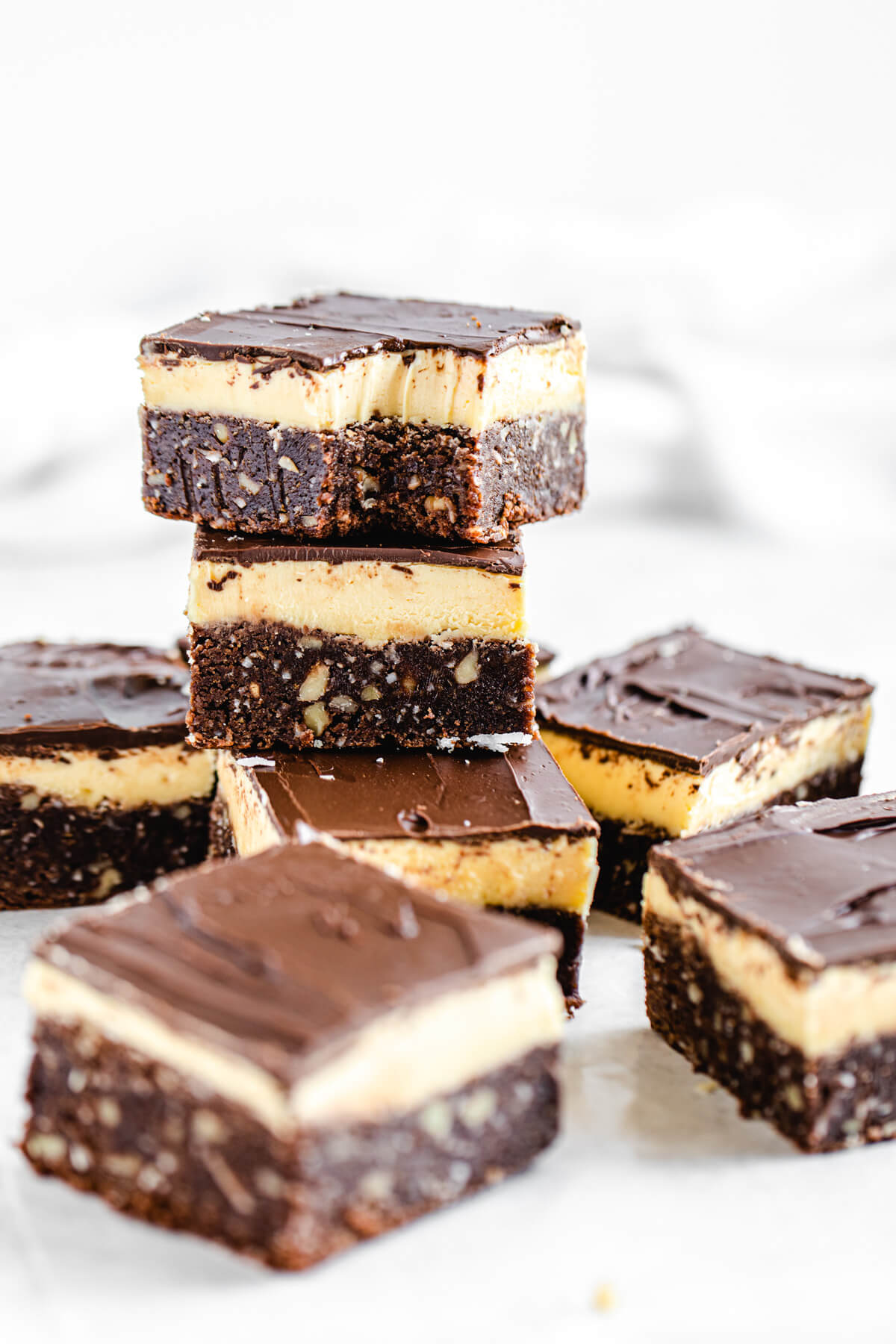 For the Nanaimo Brownies:

For the Custard Buttercream Layer:

For the Chocolate Layer: 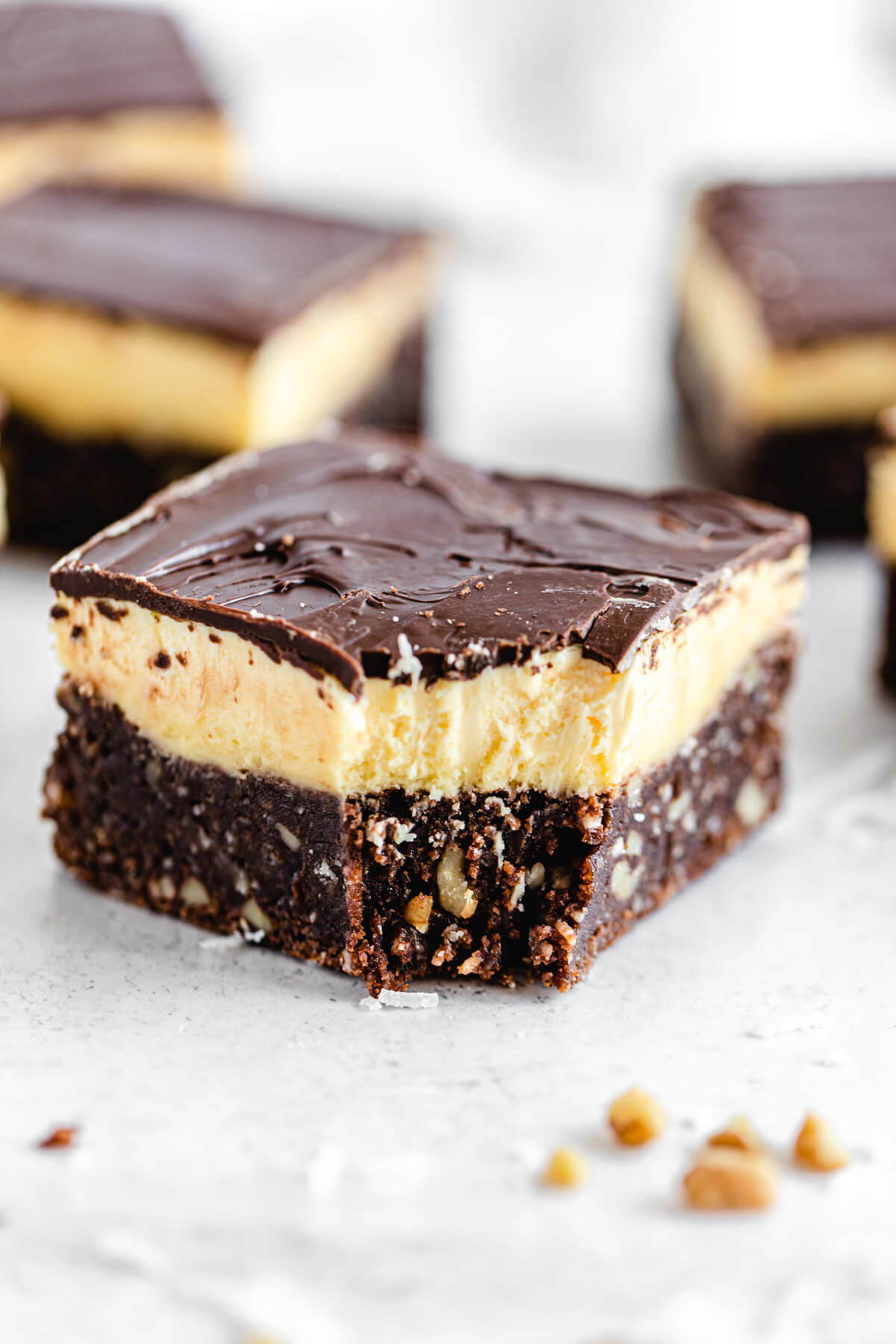 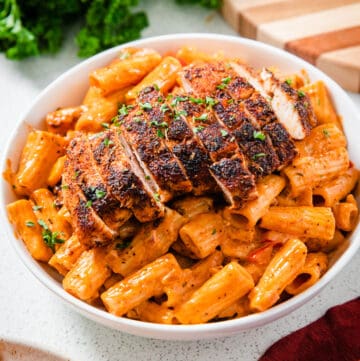 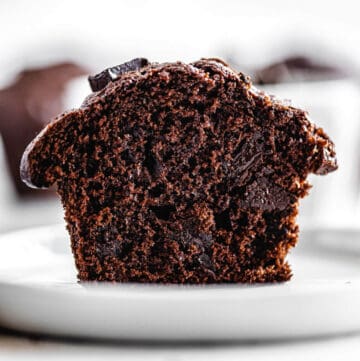 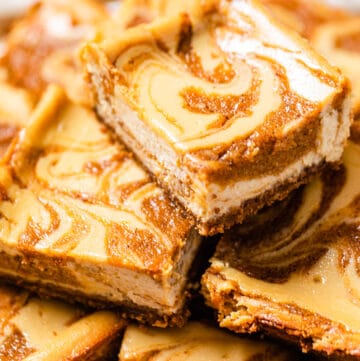 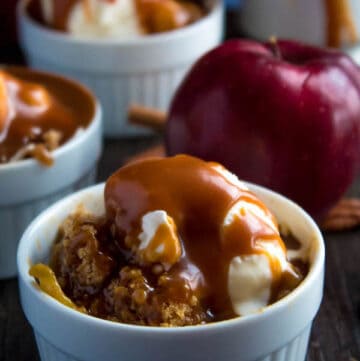