This classic Canadian dish just got better! This Poutine Pizza is topped with poutine gravy, shredded mozzarella and white cheddar cheese, crispy fries, steak and chunks of white cheddar cheese curds! To take it to the next level, the crust is stuffed with cheese! 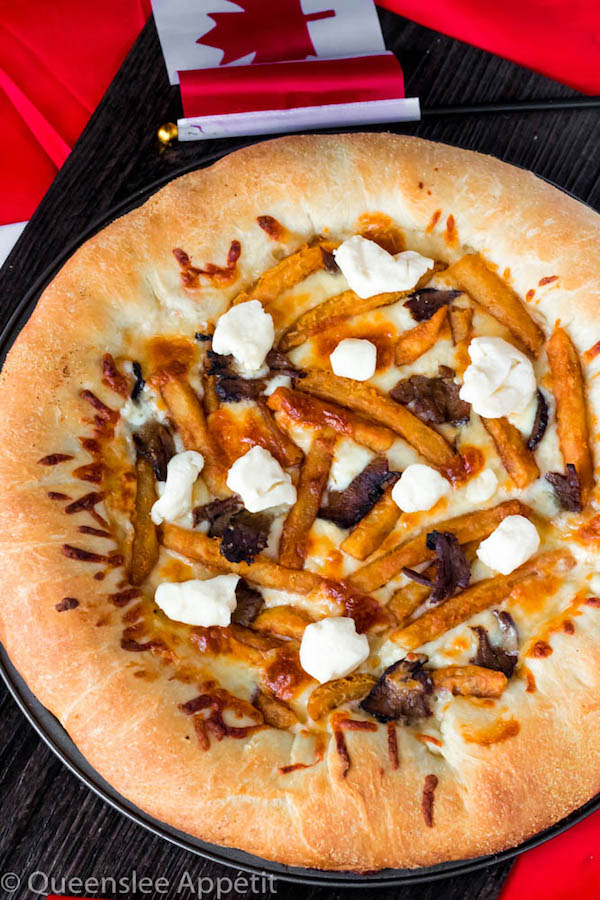 Canada Day is almost here so I just had to share a Canadian themed recipe with you guys, and what’s more Canadian than Poutine? Of course, as a Canadian I’ve had my fair share of poutine, and I can honestly say it’s one of my favourite meals!

I can’t believe this perfection was created by some dude who put cheese curds over his fries to keep them from getting soggy from the gravy (that’s the story I heard, at least). As silly as the poutine’s origin story is, the person who created it is a national treasure and I salute them. 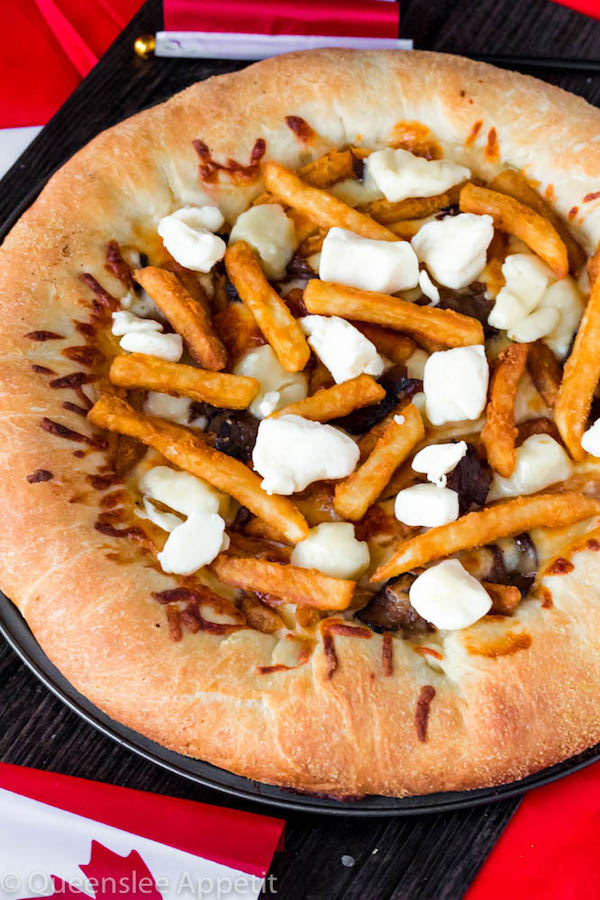 I originally decided to share a recipe on how to make authentic Canadian Poutine, but in the end I chose to do something quicker and easier. Every part of this poutine pizza is completely fool proof! Yes, it may take some time because of the dough rising but even that can be made ahead of time and kept in the freezer. Just thaw it out and you can put this pizza together in no time.

My homemade pizza dough is enough for 2 pizzas, which is why I say to make half a recipe. Although, you can make the whole recipe and save the other half of dough to make one of my other mouth-watering pizza creations! 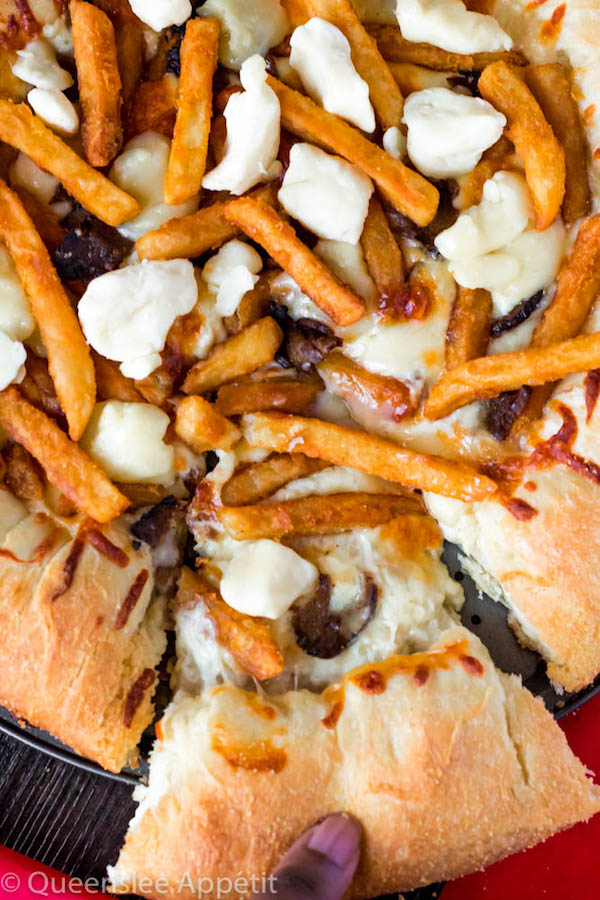 I decided to make a full recipe of my pizza dough, then used about ¾ of the dough instead of half. This way I got a big fluffy crust. And what do we do with big fluffy crusts? We stuff them with cheese, of course! 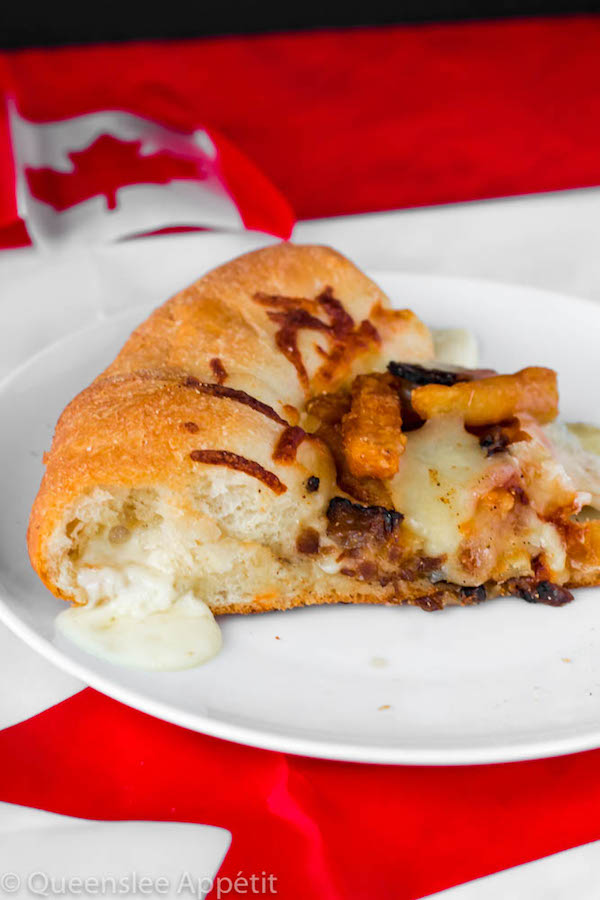 How do we stuff the crust with cheese?

Well, I’m glad you asked! It’s actually super simple. Start by rolling out your pizza dough into a flat circle that’s a bit larger than your pan.

Line your cheese sticks closely around the crust, leaving space at the edges to fold over. Then wrap the excess dough over the cheese and tuck and seal it tightly. 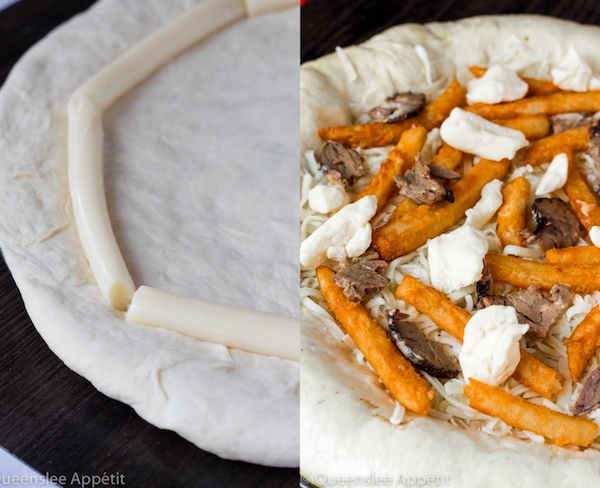 In my first Stuffed Crust Pizza recipe, I used small sticks of cheese I cut out of a block of mozzarella. That didn’t really create a cheesy enough crust for me, so this time I used mozzarella cheese strings. These cheese strings are longer and thicker, which creates a super ooey-gooey cheese stuffing inside of the crust! 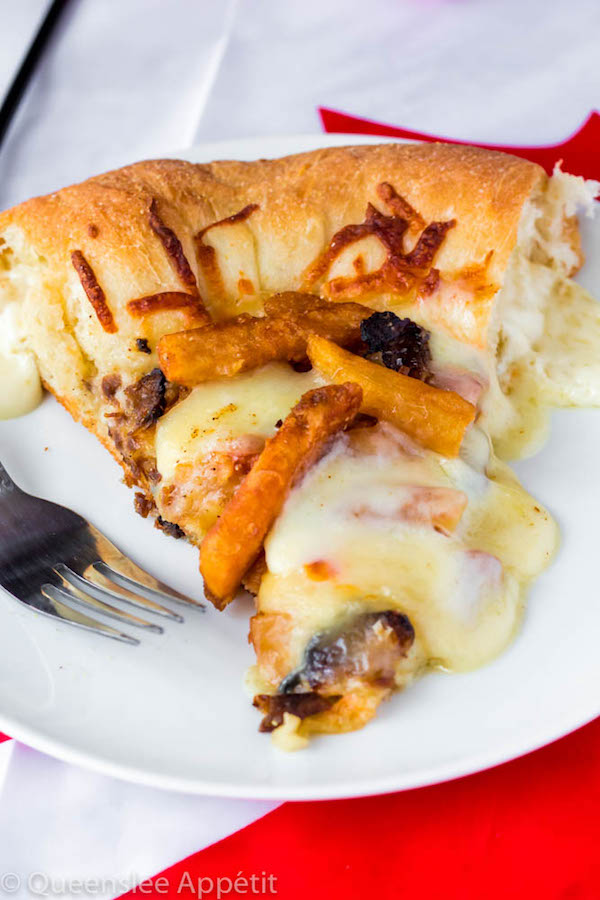 Instead of topping this pizza with regular pizza sauce, I topped it with gravy! I mean, it is a poutine pizza after all, and one of the main components of a poutine is the gravy.

I was originally going to use canned poutine gravy to simplify this recipe an use less ingredients. However, I’m not sure if people outside of Canada will be able to find poutine gravy at their local grocery stores, so I included a super simple recipe for the gravy below. 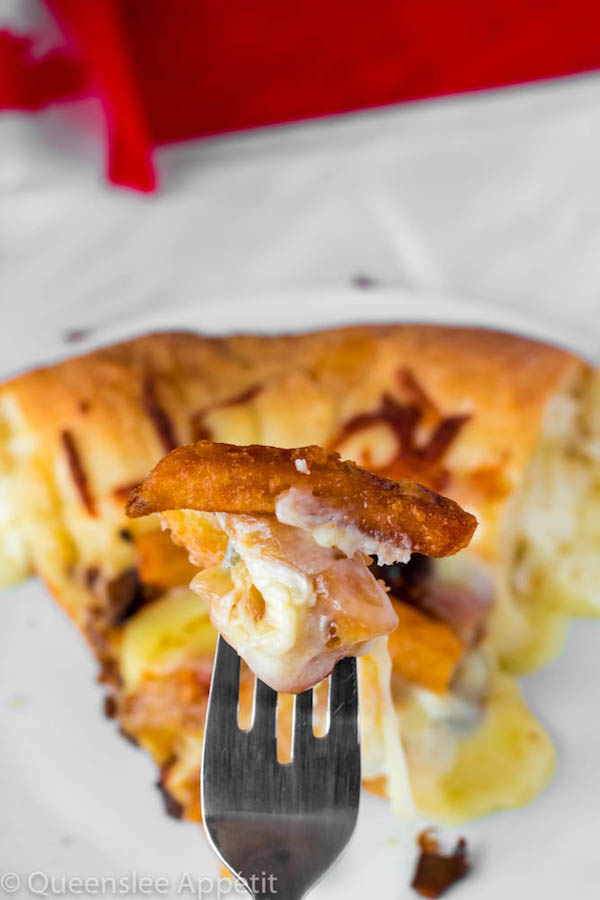 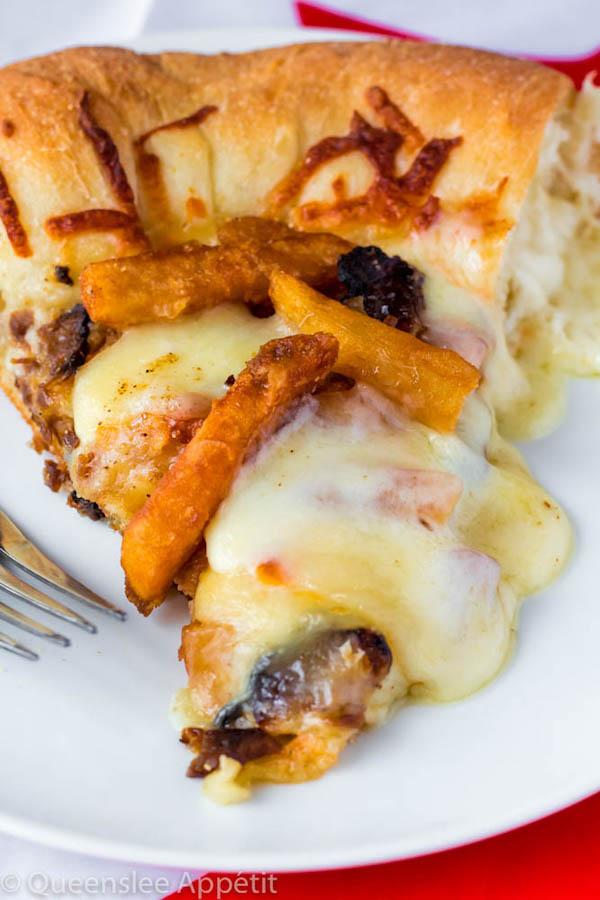 Since the only purpose for the poutine gravy in this recipe is to act as the pizza sauce, I didn’t want the recipe to be to complicated. All you need for the gravy is butter, flour and beef stock. Mix the flour and butter together to create a roux, then add the stock and stir until thickened. That’s it! You may have some extra gravy left which can be used as a dipping sauce for your pizza! Ugh, I’m drooling. 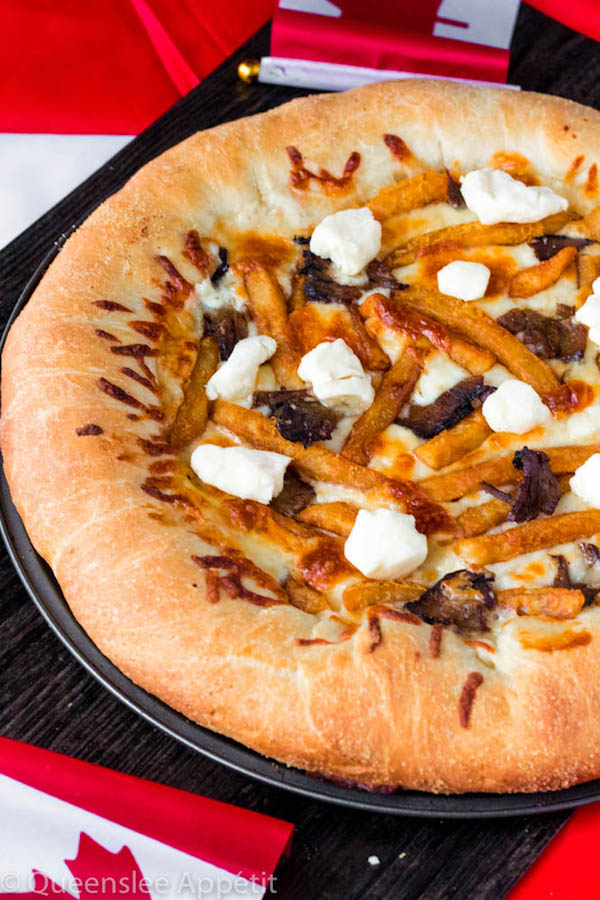 For the toppings, I used shredded mozzarella and white cheddar cheese (which is the type of cheese used in poutine). I also topped it with some poutine cheese curds, steak and french fries! 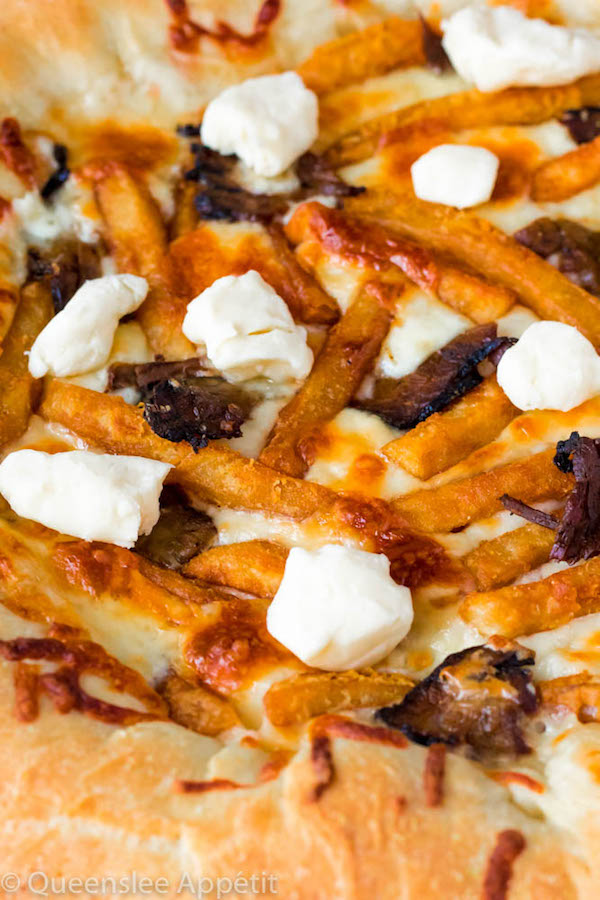 The steak and fries are pre-cooked. I just went to Tim Hortons and bought a steak sandwich and removed the steak, to top the pizza. Hey, it’s a cheaper alternative! For the fries, I just bought some of my favourite fries and placed some on top of the pizza. 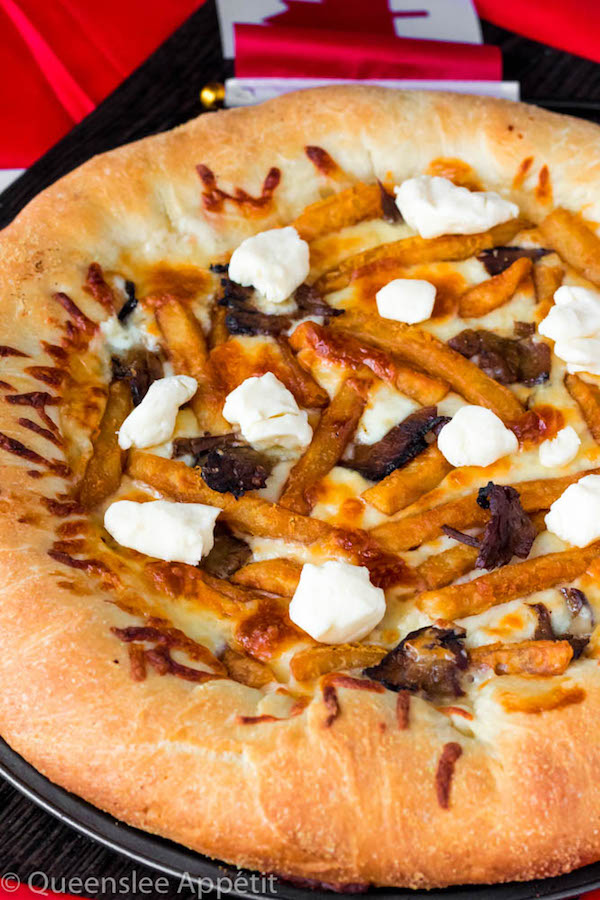 One thing I recommend doing is leaving the fries, steak and cheese curds off the pizza until after it’s baked. I should’ve done this because all of the toppings just get hidden under the cheese. Also, the cheese curds melt completely, which makes it sort of pointless because you can’t even tell it’s a poutine pizza. 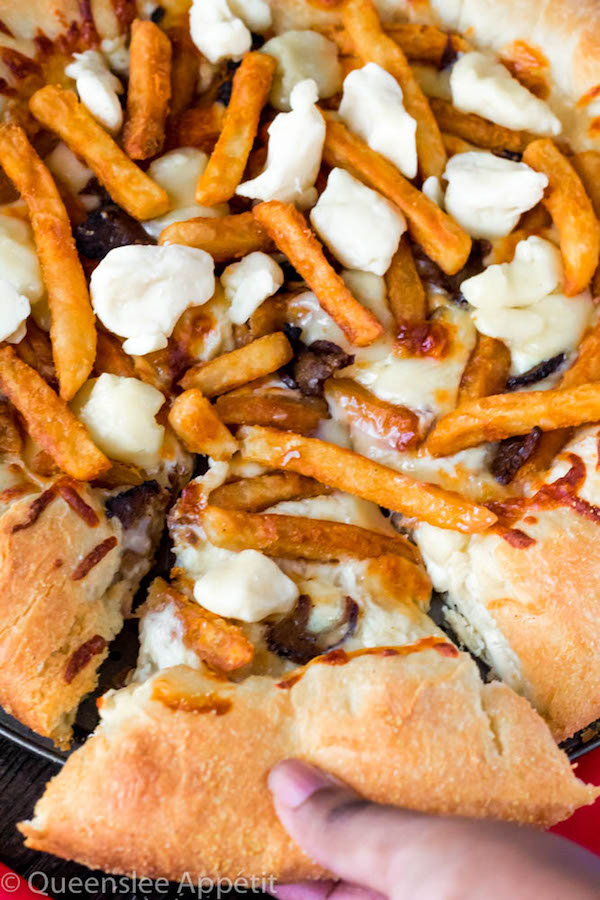 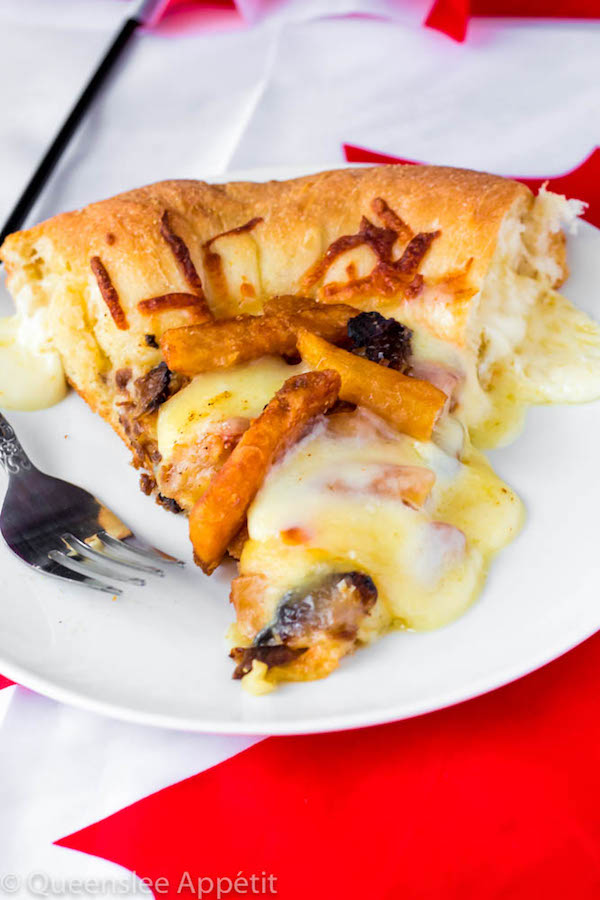 Here are some of the tools I used to create today’s recipe:

For the Poutine Gravy:

- My pizza dough recipe makes 2 crusts. You can halve the recipe, or you can store one ball of dough in the freezer to make a second pizza.

- If you can’t find cheese curds, feel free to substitute with soft mozzarella cheese (like bocconcini) and tear into pieces.

- If you can find poutine gravy at your local grocery store, you can definitely use that instead of making the gravy from scratch. 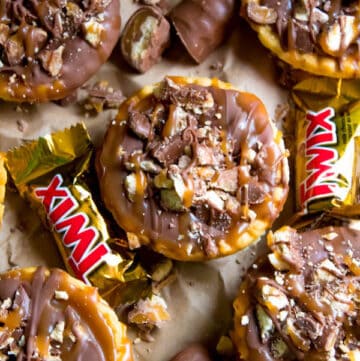 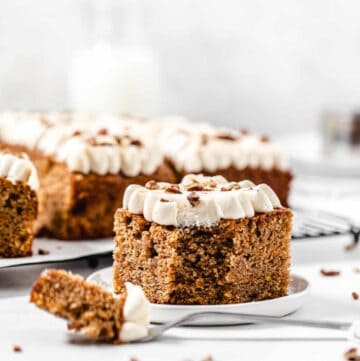 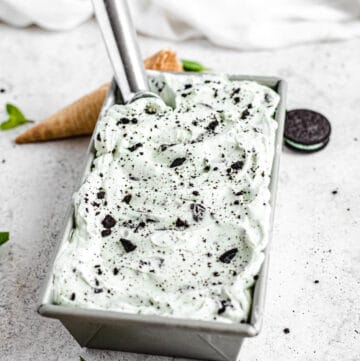