This Cajun Shrimp Chicken and Steak Alfredo Pasta is made with penne pasta, cajun flavoured shrimp, chicken and steak all coated in a creamy Alfredo sauce. An easy weekday dinner jam-packed with loads of flavour in every bite! 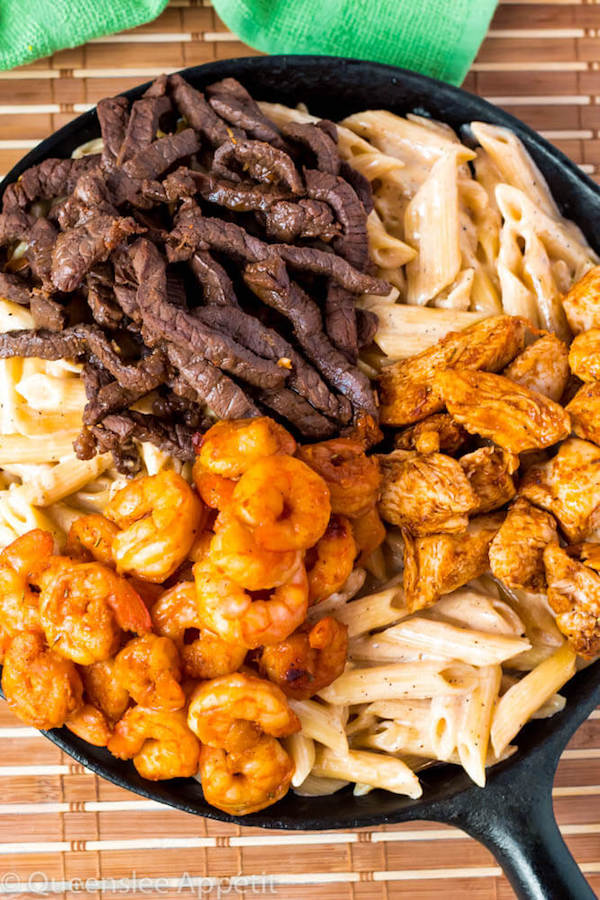 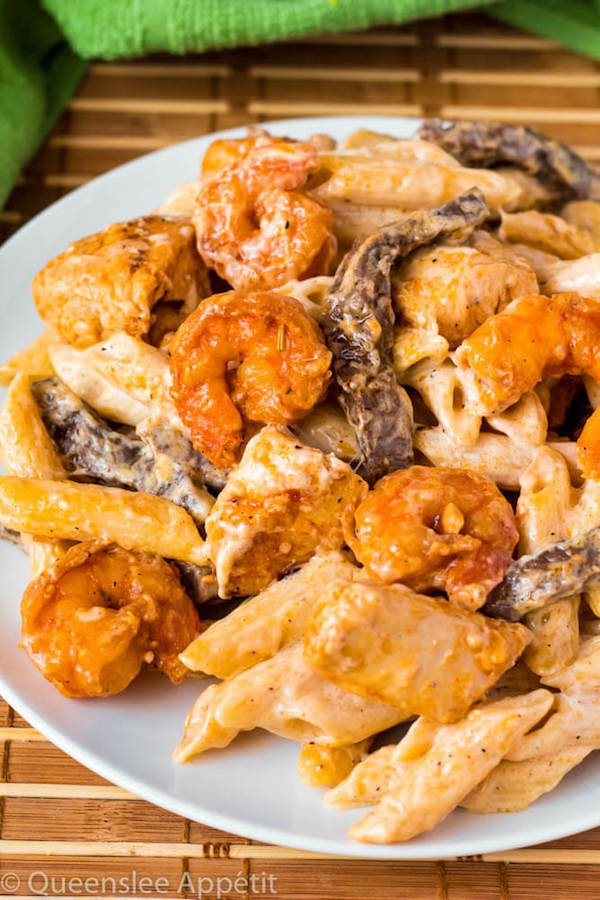 This recipe was created from my inability to keep things plain and simple. It was originally supposed to be a Chicken Alfredo recipe, but then I found myself throwing in some shrimp and then a ton of steak for good measure. And I think everyone knows about my obsession with all things Cajun — so thus, the Cajun Shrimp Chicken and Steak Alfredo Pasta was born! 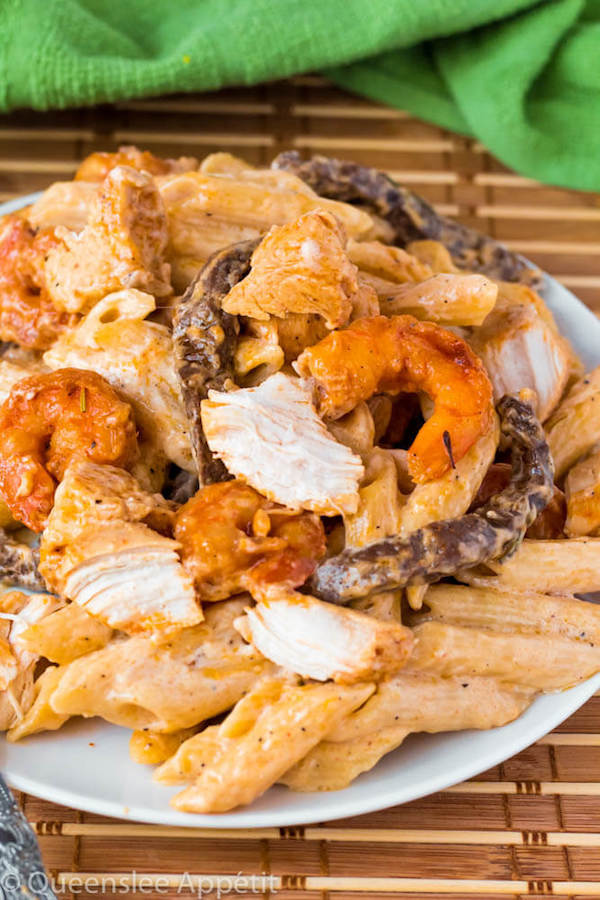 I was originally going to keep this recipe to myself simply because it was all thrown together last minute, but after one bite I decided it was too good not to share!

The creamy, cheesy parmesan sauce paired with the Cajun flavoured shrimp, chicken and steak is just heavenly! It’s like my Cajun Shrimp Fettuccine Alfredo, but so much better because of the additional flavours. 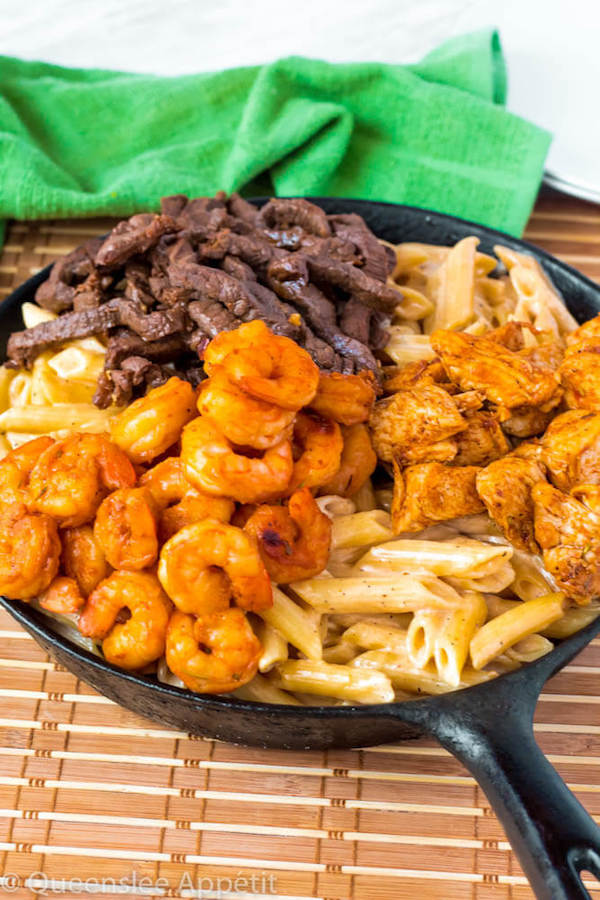 How to make Cajun Shrimp Chicken and Steak Alfredo Pasta

This dish has 5 parts — the steak, chicken, shrimp, pasta and Alfredo sauce.

We’re gonna start with the steak because it needs to marinate overnight. I’ll be honest with you, I’ve never cooked steak.....like, ever. I actually think I messed up the cooking part a bit, but we’ll get more into that later.

I searched up a bunch of steak marinade recipes and combined some ingredients from each to make my own and added some Cajun seasoning for extra flavour. You can definitely use your favourite marinade recipe or prepare your steak however you want. Remember, this is my first time cooking steak so I’m nowhere near an expert.

For the steak, I used angus beef strips, but you can use ribeye steak and slice into strips, or preferably chunks to make it easier to eat.

Since I’m one of the weirdos who prefers to eat steak well done, I ended up cooking mine a bit longer than I was supposed to. I recommend cooking your steak for about 1-3 minutes rather than 6-7 like I stupidly did. 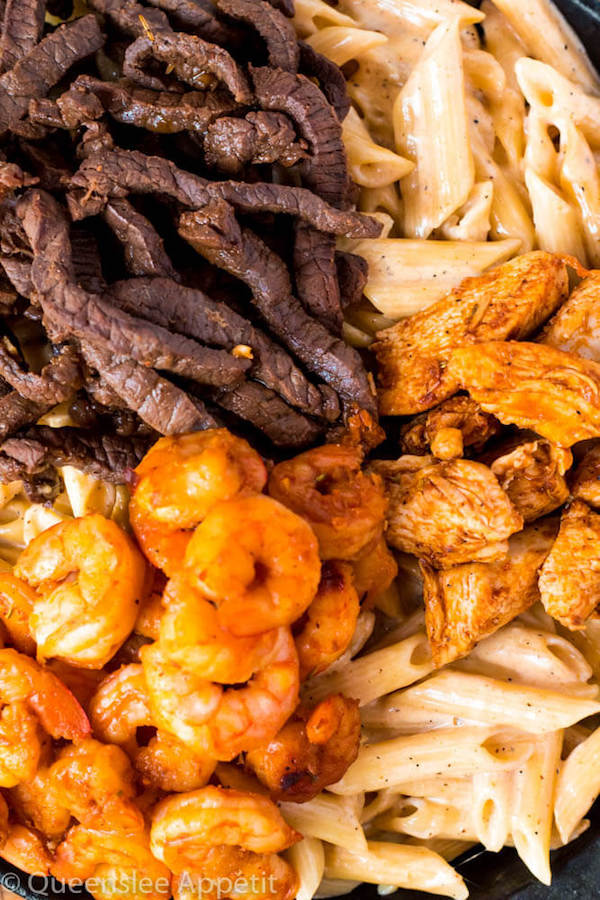 The pasta is pretty simple, of course. I used penne for this recipe, but you can use any type of pasta you want.

When boiling the pasta, make sure to add salt and olive oil to the water. The salt boosts the flavour in the pasta and the olive oil ensures that it doesn’t stick together. 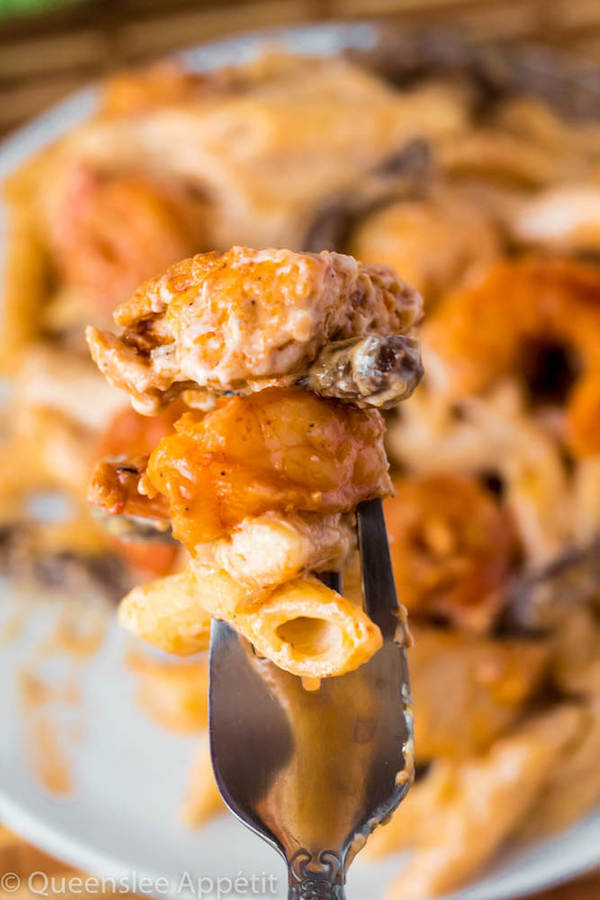 Next up is the chicken, this part is really easy. I used 1 skinless boneless chicken breast, which is plenty because we already have a ton of steak and shrimp.

Cut the chicken breast into 1-inch cubes then cook it until it’s no longer pink. Once cooked, season with salt, pepper and Cajun spice.

Now the inner me was screaming in horror because when it comes to chicken, I always marinate it overnight, then season it some more before cooking. However, that seemed like a whole lot of work for a small amount of chicken so I went the easy route and thankfully it still tasted great! 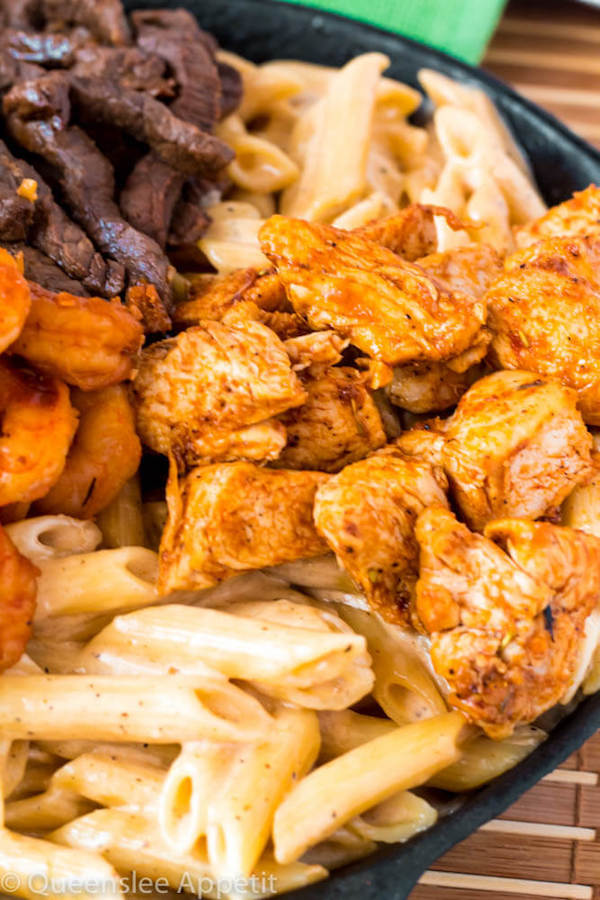 The shrimp is my favourite part about this dish. It’s extremely easy to make and only requires 5 ingredients — shrimp, olive oil, cajun seasoning, salt and pepper. Just mix all those ingredients together, then cook it on the stove until shrimp is pink. Easy!

And remember to de-vine your shrimp because no one likes to do it while eating.

Last, but certainly not least, we make the Alfredo Sauce! My Alfredo recipe is super creamy and delicious — I can’t get enough!

As I mentioned in my Shrimp Fettuccine Alfredo post, I used to use store bought Alfredo sauce all the time when cooking pasta. After realizing how incredibly easy it is to make from scratch, I’ve never bought a jar of Alfredo sauce since.

Now, back to this superb sauce. Did just say “superb”? God, I’m lame. Anyways, we start by melting some butter and cream cheese together on the stove. The cream cheese makes the sauce extra rich and creamy!

Usually people create a roux in the beginning to thicken the sauce, but I chose to use heavy cream which works just as well. After we stir in the cream, we’re gonna season the sauce with salt, pepper and cajun spice to give the sauce a lovely boost of flavour. Did I mention I’m obsessed with Cajun flavour? 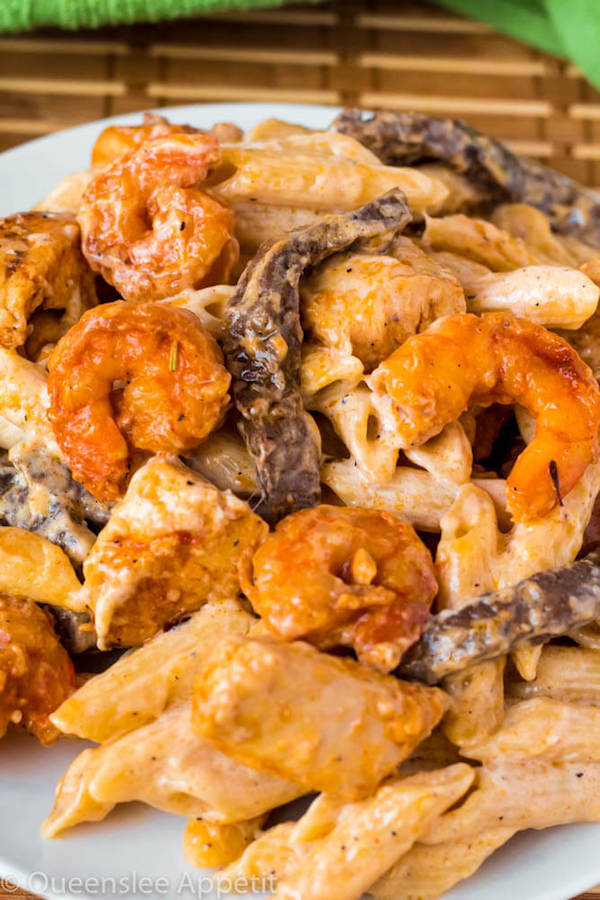 Once the sauce has thickened, we add the parmesan cheese (yum!) and mix until it’s melty and smooth. Finally add the pasta, then stir in your shrimp, chicken and steak. 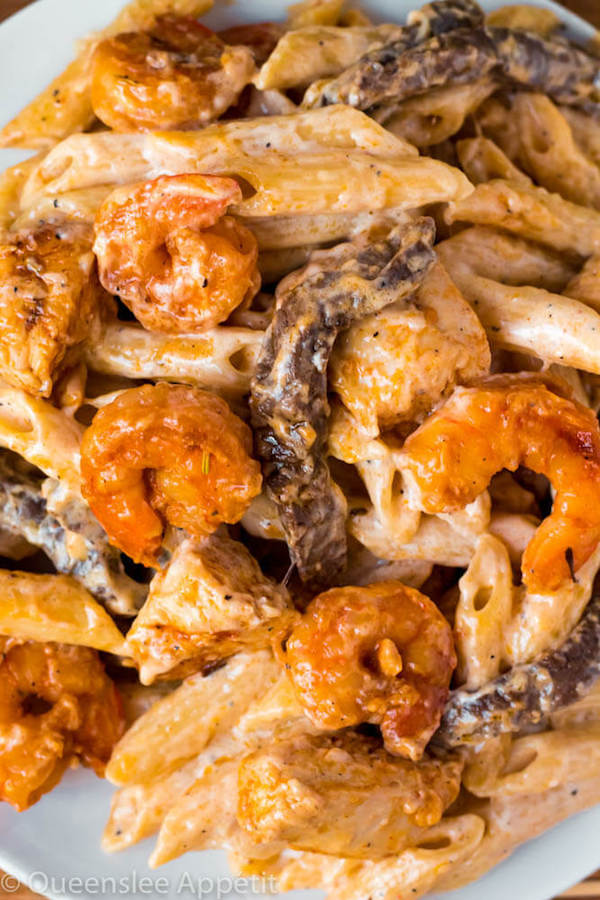 There may be quite a few steps, but by God are the end results worth it! Now even though I ate this entire thing on my own (not one bit of guilt), I would say this recipe serves about 4-6 people so it’ll make the perfect weekday meal for your family.

Or the perfect cheat day meal for yourself.

For the Steak Marinade:

For the Alfredo Sauce:

You can definitely use your favourite marinade recipe or prepare your steak however you prefer. 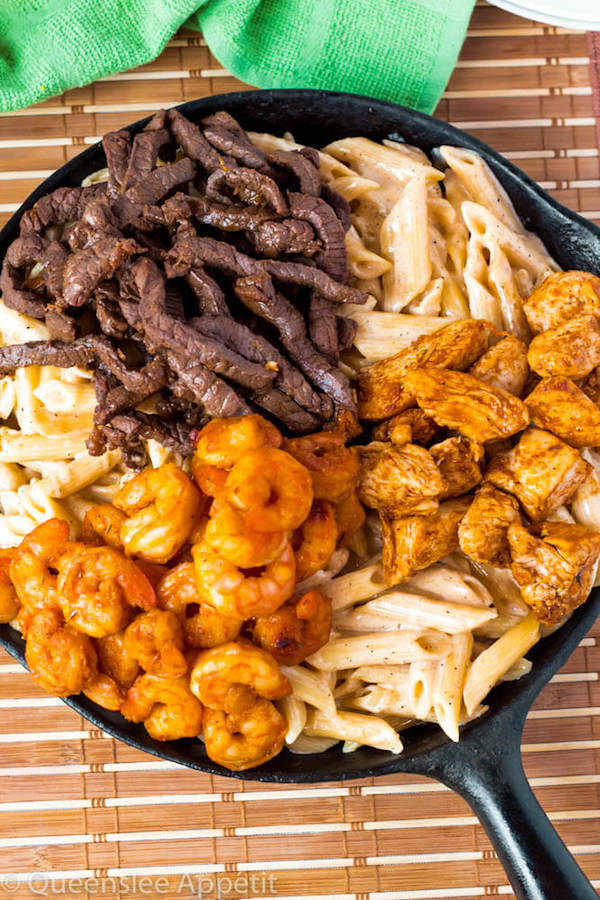 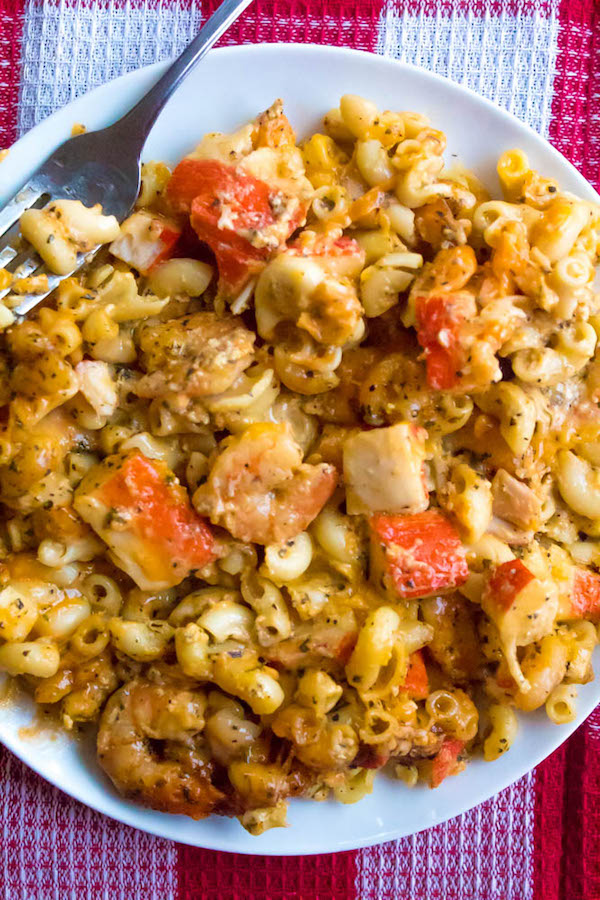 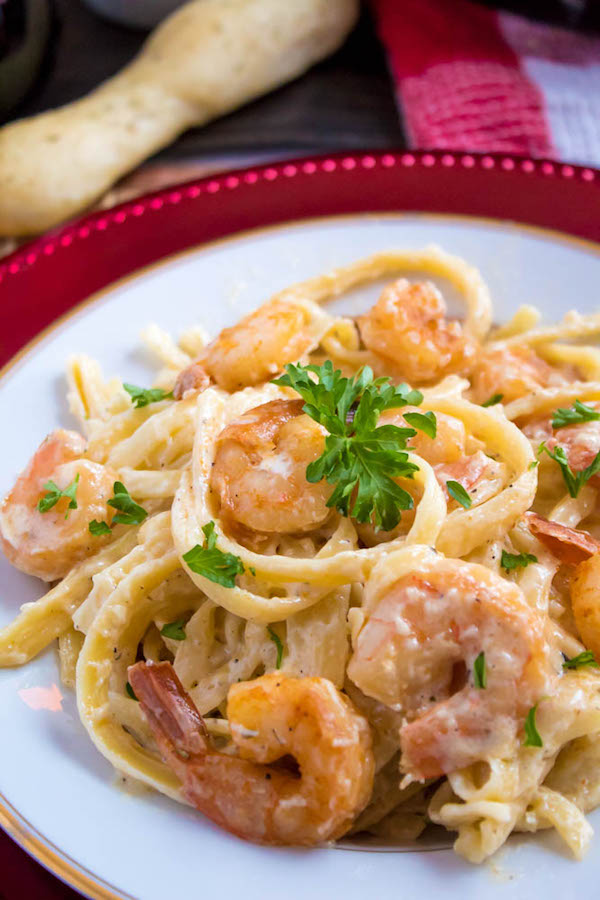 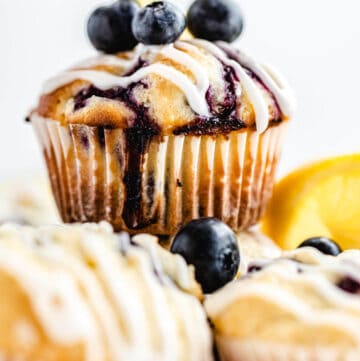 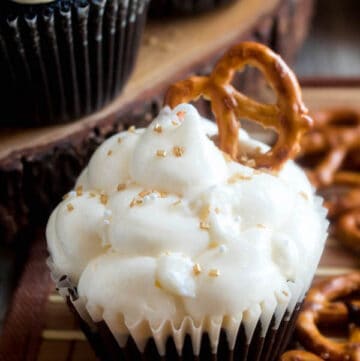 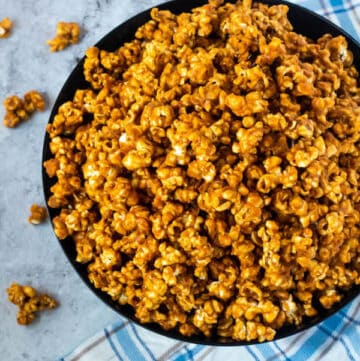