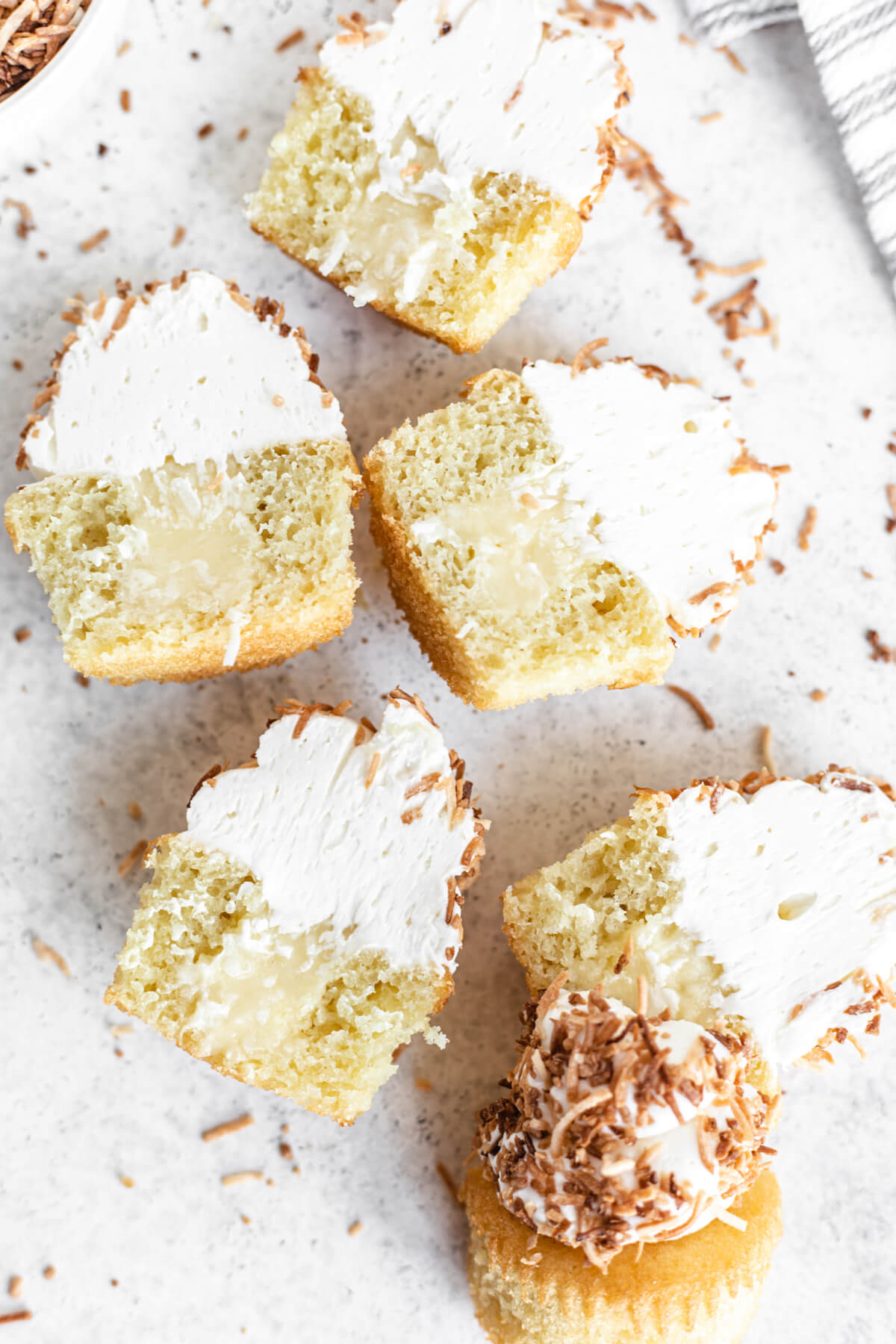 For Coconut Lovers Only

Today is National Coconut Cream Pie Day, but instead of making a coconut cream pie, I decided to turn the classic dessert into cupcakes!

Here’s the thing, I’m not a fan of coconut…at all. There’s been a few instances where I hated a certain flavour/food, but once I added it to a baked good, I fell in love. For example, this banana bread. I still dislike bananas, but I ate that entire loaf because it was incredible and made the banana taste more appealing to me.

Unfortunately, I can’t say the same for coconut. No matter what form it’s in, I just can’t seem to enjoy the coconut flavour and especially not the texture.

That being said, the recipes I make are mostly for my readers so I won’t let my personal tastes affect the recipes I share with you guys. So if you’re a coconut lover, this ones for you! 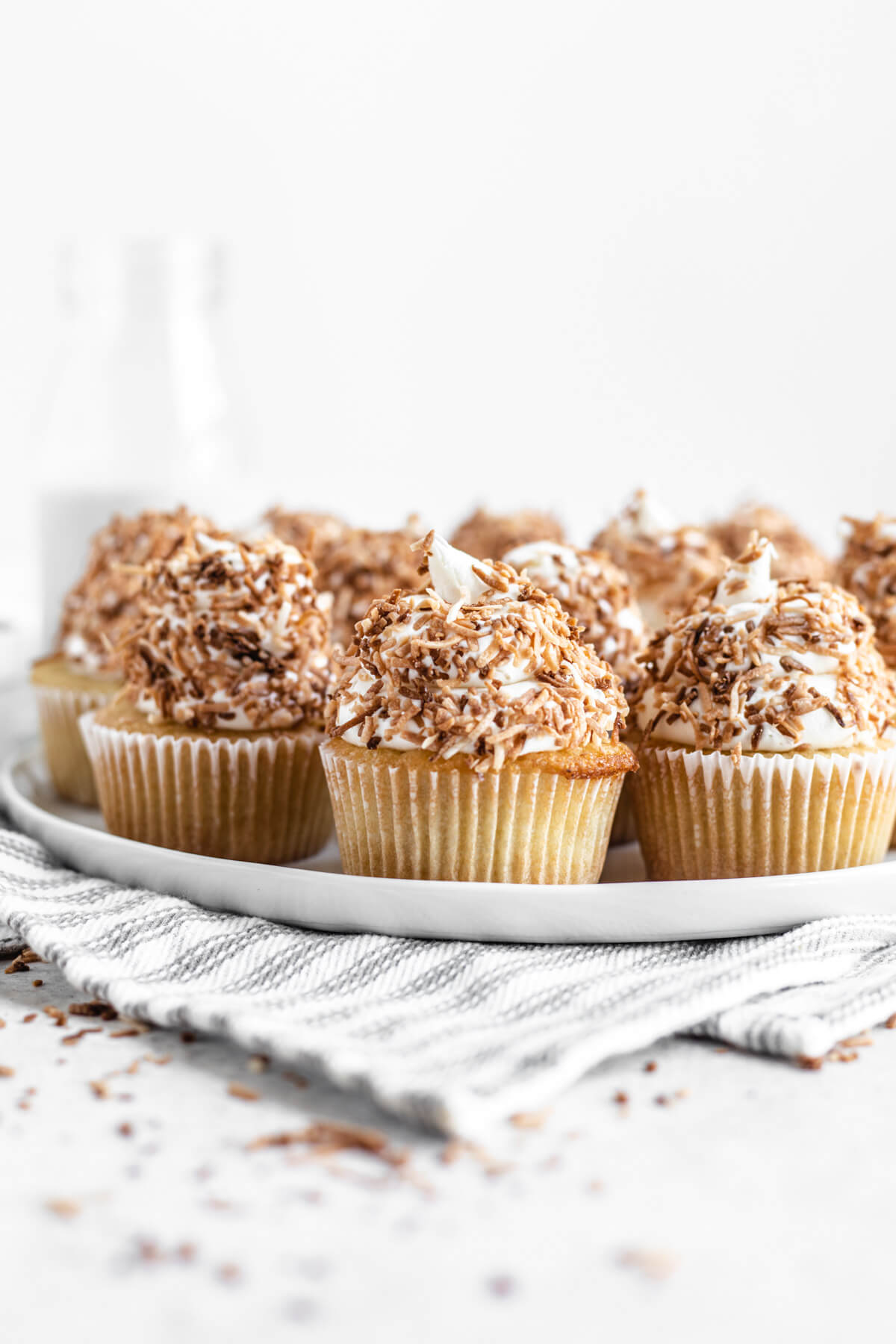 These coconut cream pie cupcakes are truly a coconut lovers dreams come true. Every inch of this cupcake is loaded with coconut flavour from the cake to the coconut filling to the coconut buttercream!

These cupcakes look pretty simple, and they are! However, there are quite a few steps, especially since I changed the coconut cupcake recipe, but it’s nothing you can’t handle. Trust me. 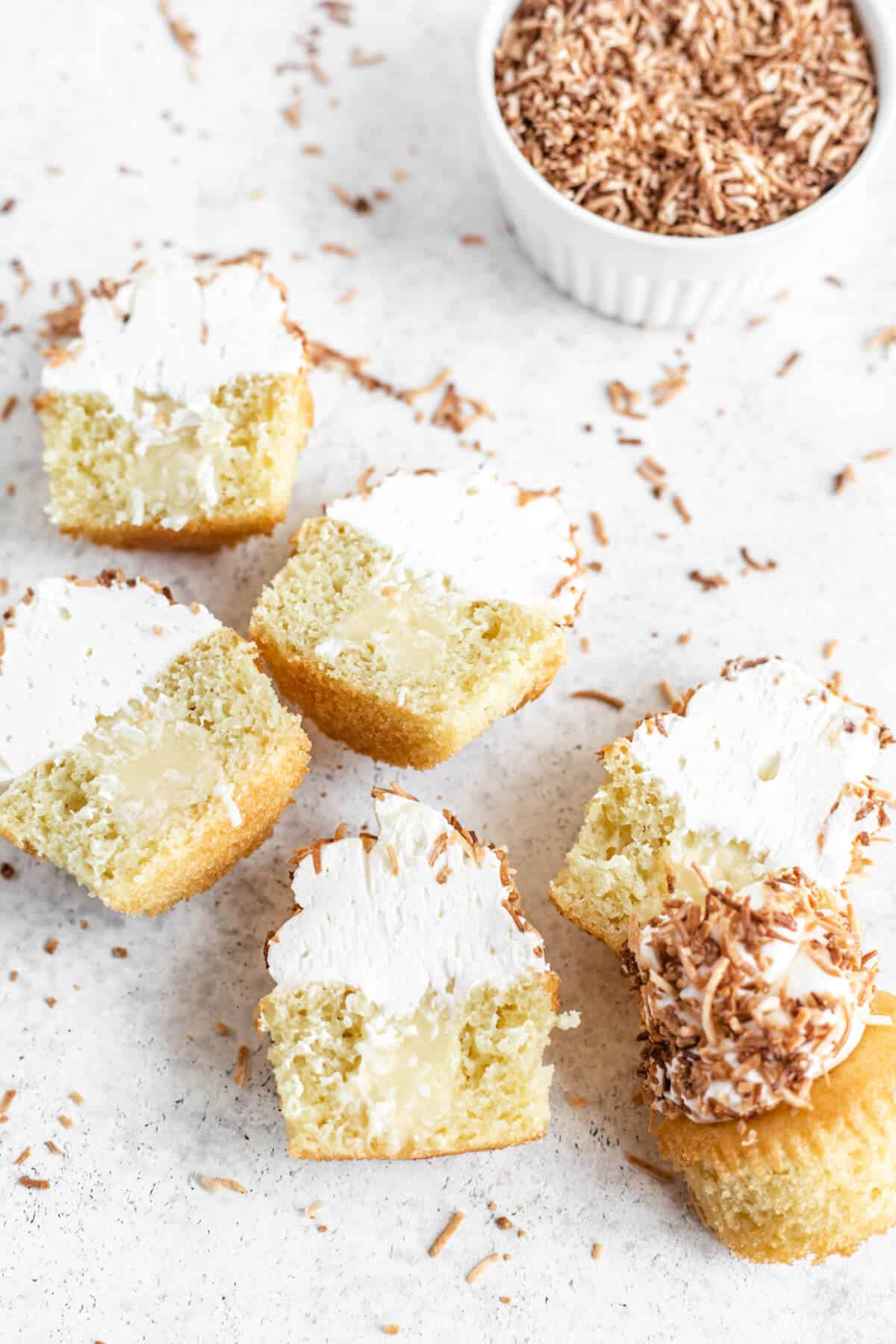 3 Parts to these Cupcakes

There are three parts to this recipe (or four if you count toasting the coconut topping).

Each part is pretty easy to make. The most difficult part is the coconut custard, and even that only takes medium level skill. 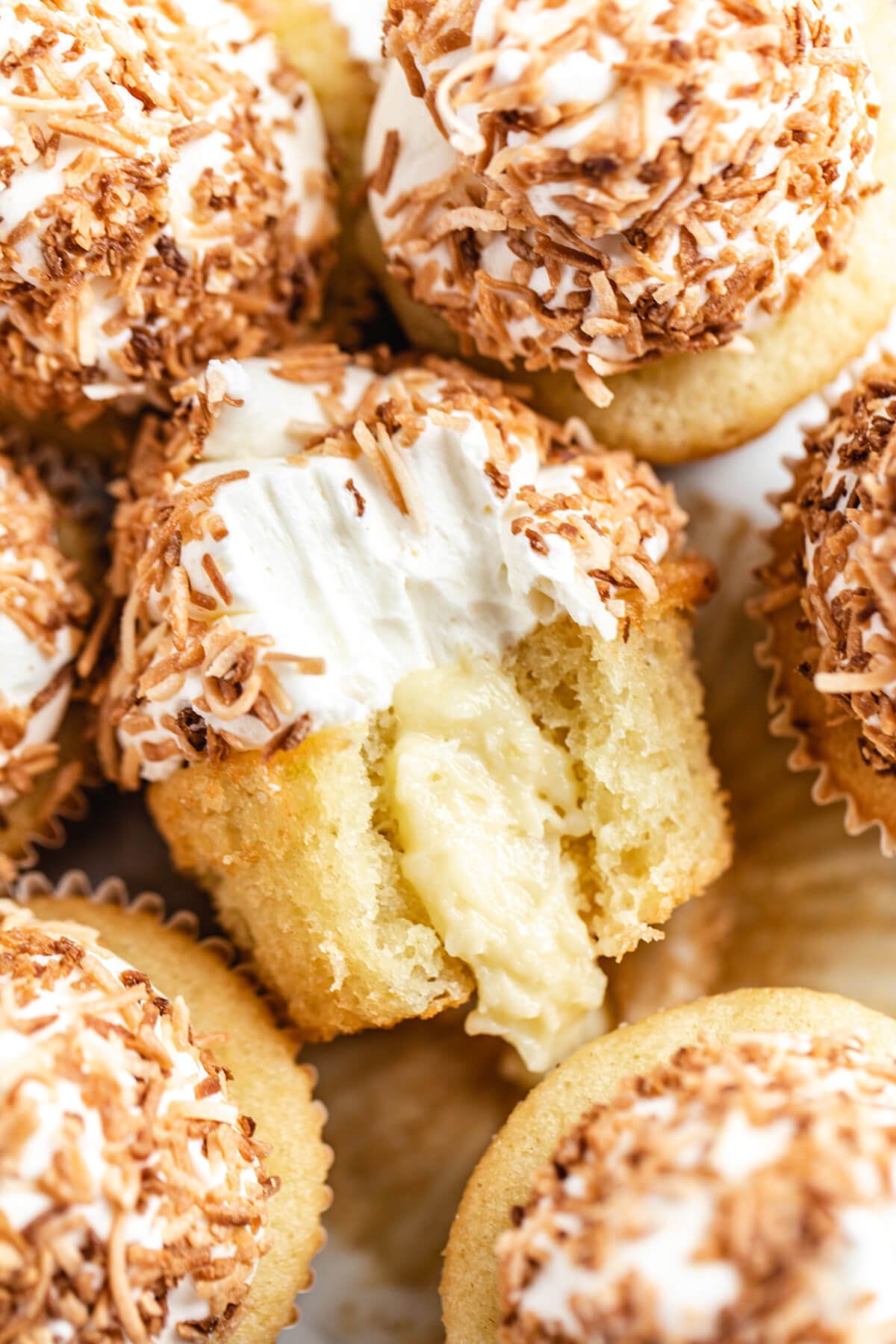 So let’s break down every part of this extravagant dessert!

When I first shared this recipe, the cupcake part was an adapted version of my vanilla cupcake recipe where I replaced the buttermilk with coconut milk and the vanilla with coconut extract.

I did the same with this new recipe, however, this time I adapted my lemon cupcakes. As easy and great as the other recipe was, my butter-based cupcakes are far fluffier! 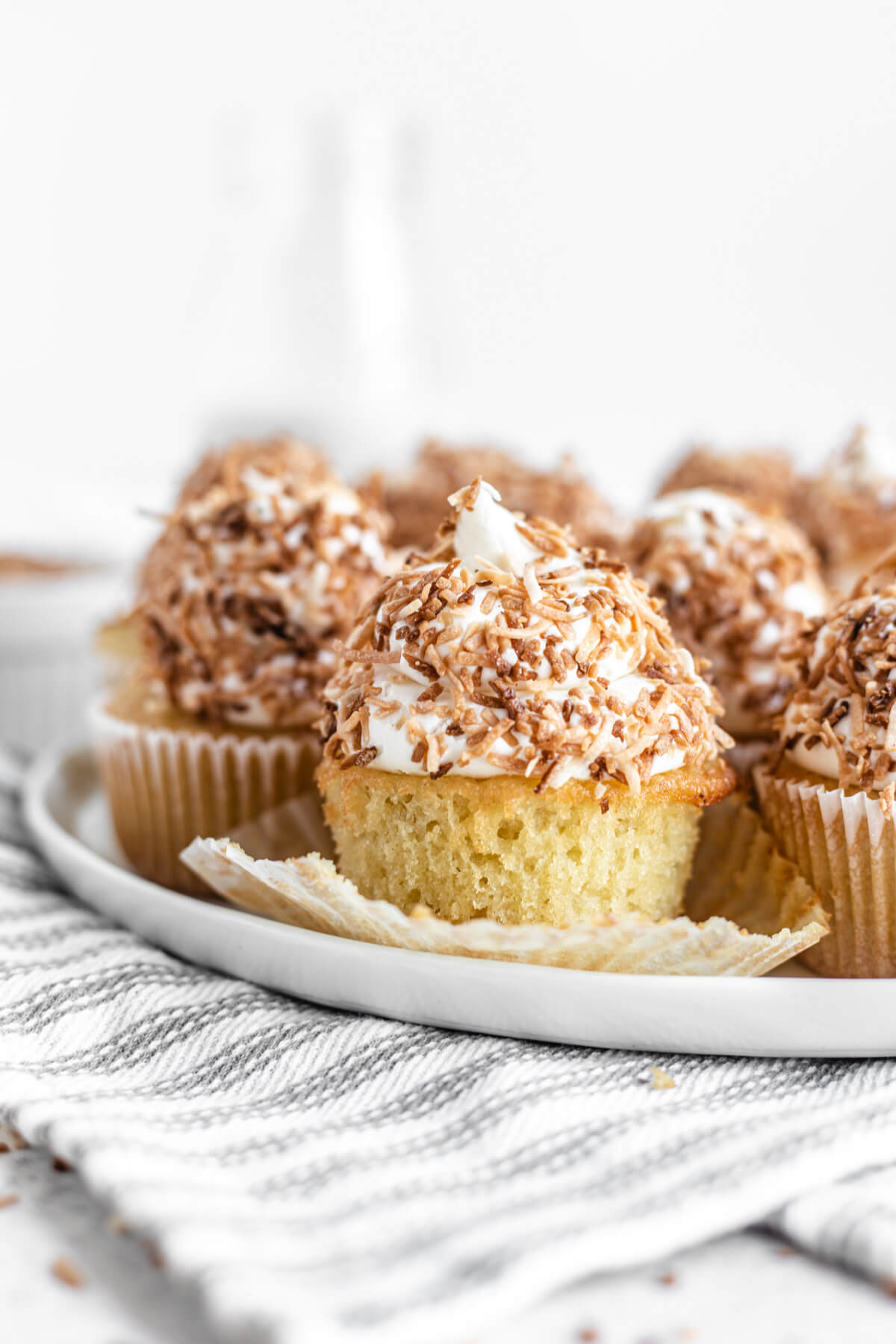 How to Make Coconut Cupcakes

Even though we’ll need to use a mixer instead of a whisk, and there’s a few more steps, this recipe is still incredibly easy! Here’s what you gotta do:

Baker’s Tip: When using canned coconut milk, shake it well before opening. Coconut milk can separate, meaning the solid fat rises to the top, so when you pour it, it’ll be watery with chunks of coconut. Shaking it well will ensure that everything is combined. 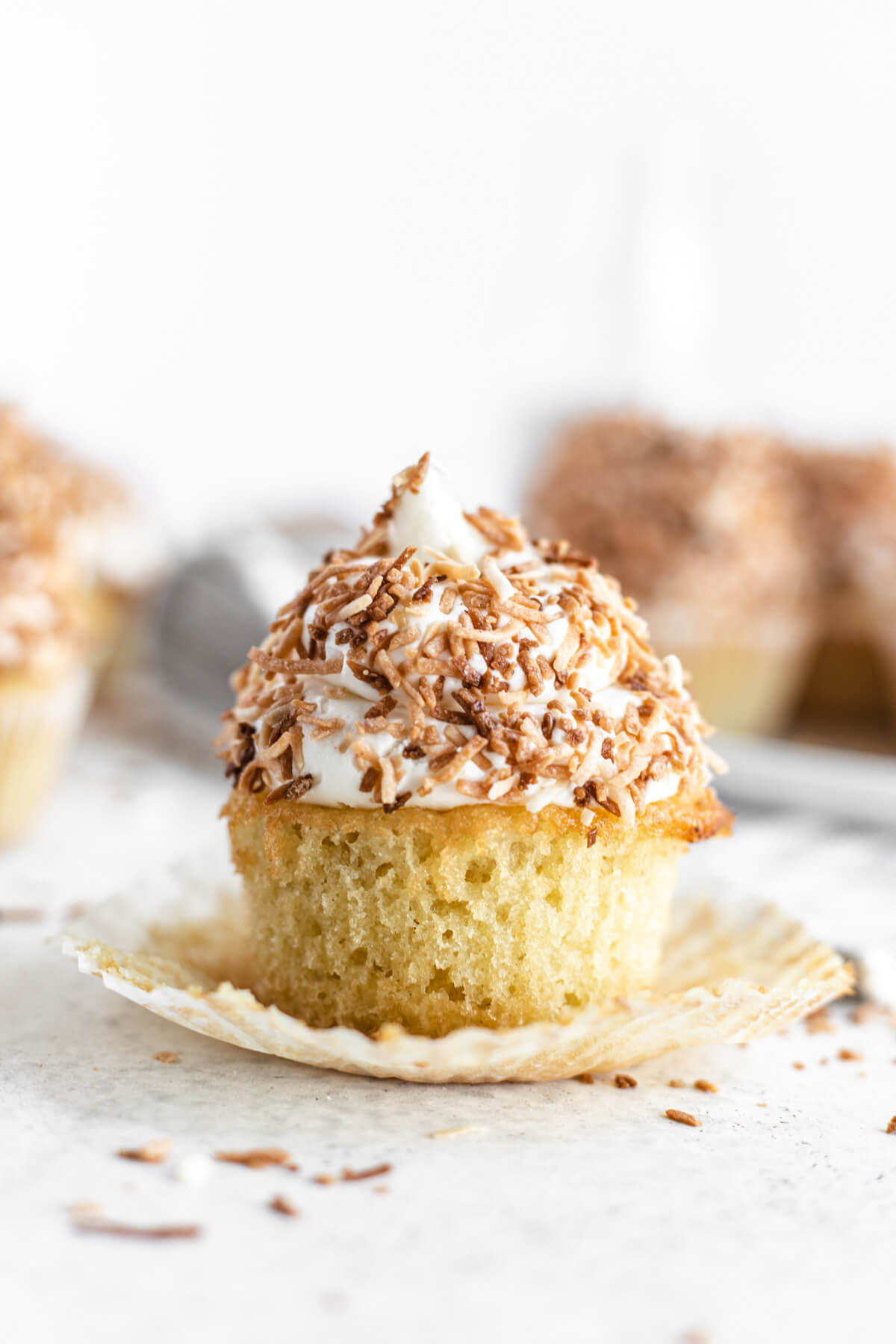 Next up is the coconut custard filling. I actually recommend you make this part first so it can chill and thicken up overnight.

For the coconut custard, I used the same base recipe I usually use for all of my pudding recipes. Although, instead of milk and vanilla, I used coconut milk and coconut extract.

The recipe is super simple to make and is ready in no time. Start by whisking the sugar, cornstarch, salt and egg yolks together in a medium bowl until smooth.  Then I combined the coconut milk and heavy cream in a saucepan and heated it over the stove until it began to simmer.

Since this is a small batch, the custard will thicken up almost immediately. This is where it gets difficult. You want to watch the custard closely, and once it begins to boil you’ll need allow it to bubble for about 30 seconds. This allows the cornstarch to cook down, but again be very careful because it can easily burn.

Once thickened, you’ll need to strain the pudding through a fine mesh strainer to make sure there are no lumps. Then mix in the butter and coconut extract for a bolder coconut taste.

I decided to fold in some coconut flakes (much to my disgust), to add more flavour and texture to the custard filling. The only thing I dislike more than the flavour of coconut is the texture, so I dreaded this part. Again, this recipe is for those of you who adore coconut, so who cares about my tastebuds? 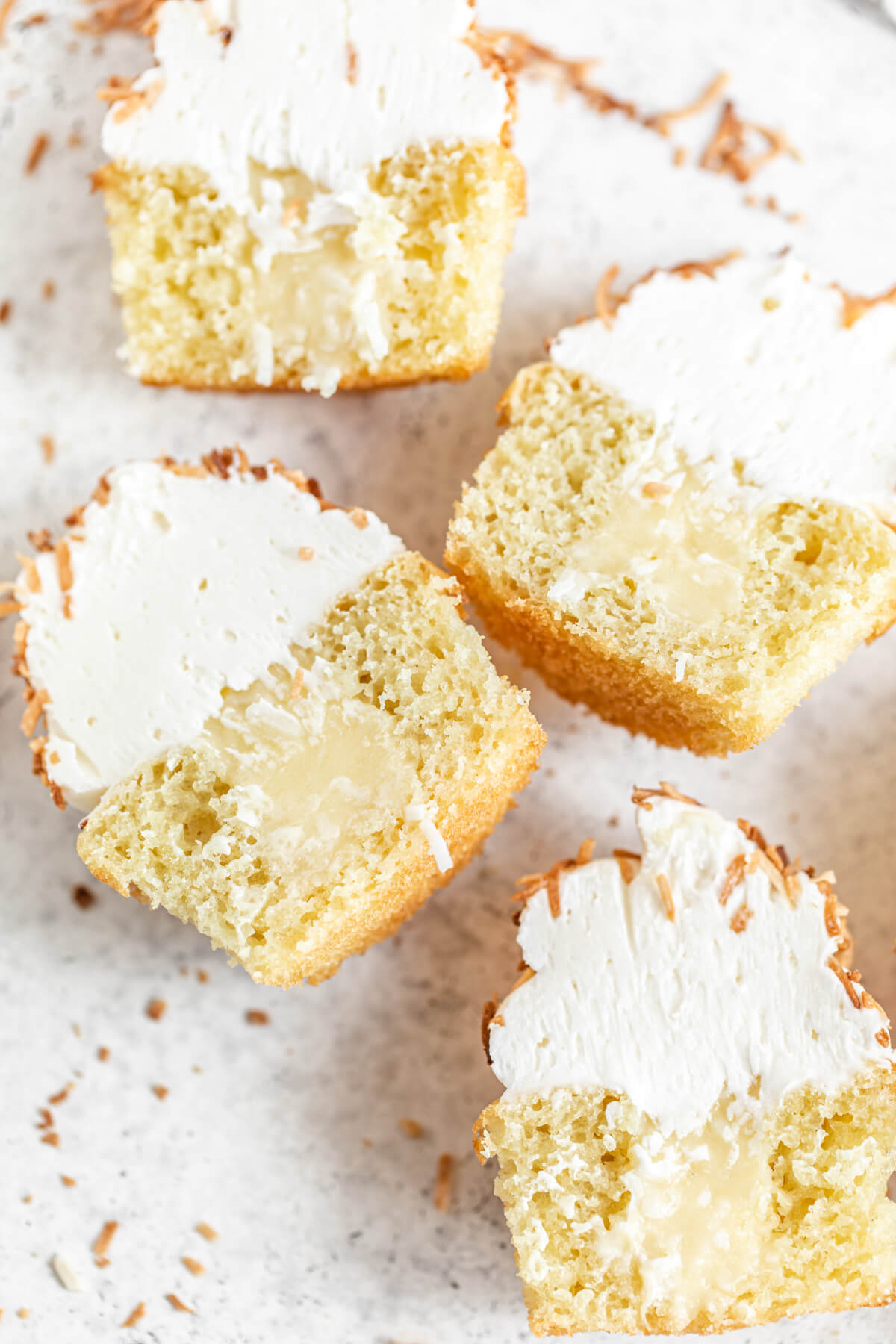 How to Fill the Cupcakes

To fill the cupcakes, start by coring a hole in the middle. I used a cupcake corer to do this. It’s basically the same as an apple corer. You can also use the bottom of a large piping tip or a pairing knife to do this.

To make the filling process neater and easier, I spooned the coconut custard into a disposable piping bag and piped it into the cupcakes. If you don’t have a piping bag, use a ziplock bag. 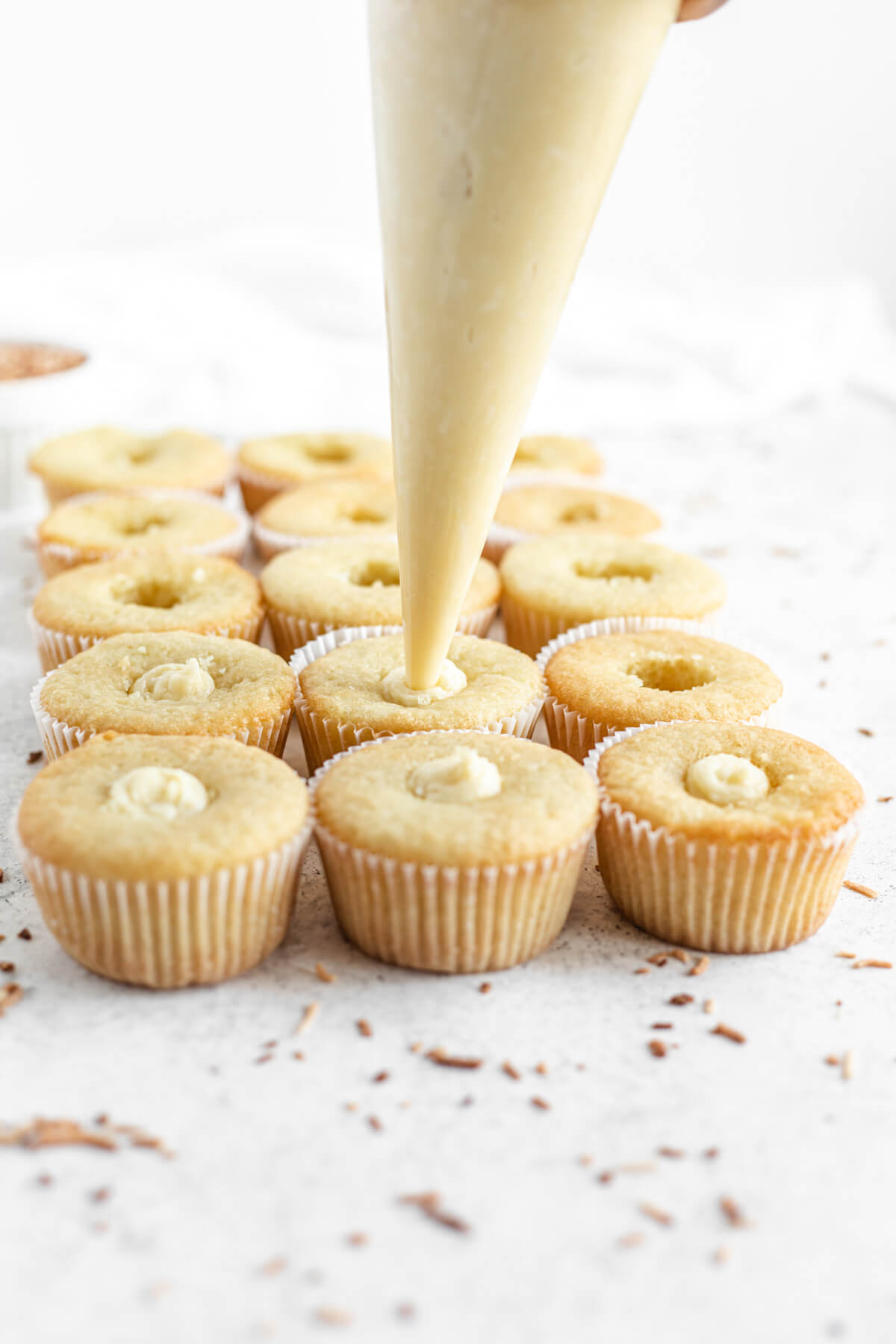 To frost the cupcakes, I used my Dreamy Coconut Buttercream. This silky, creamy, fluffy frosting was also modified from my Dreamy Vanilla Buttercream recipe, I just replaced the heavy cream with coconut milk and the vanilla with coconut extract.

I used the Wilton #2A piping tip to frost these cupcakes, but you can use any piping tip you desire. Though, since the frosting is gonna be covered in toasted coconut, there’s really no need to use a piping tip with a design. 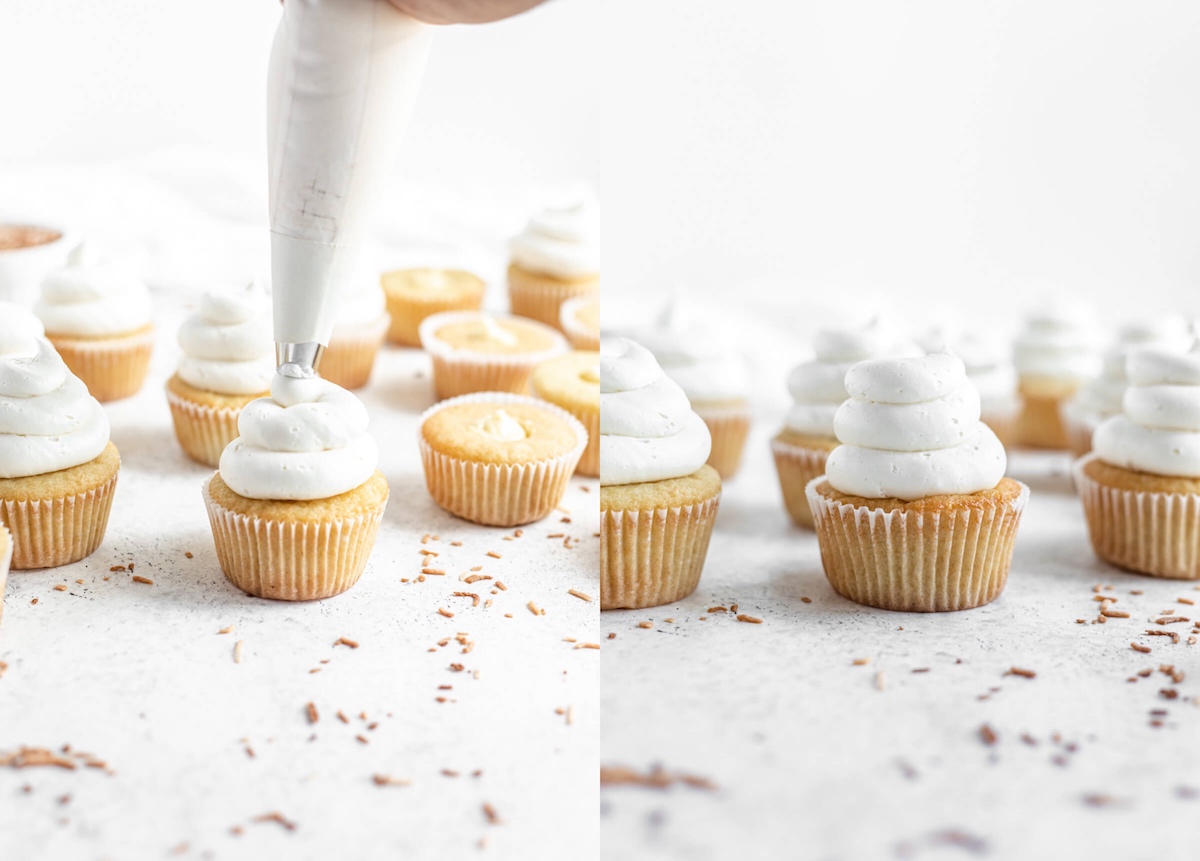 Now the frosting can easily slip off, so you’ll need to be careful. Work very quickly while doing this. And to make sure the frosting stays somewhat even, lightly pat the cupcakes into the coconut while turning. 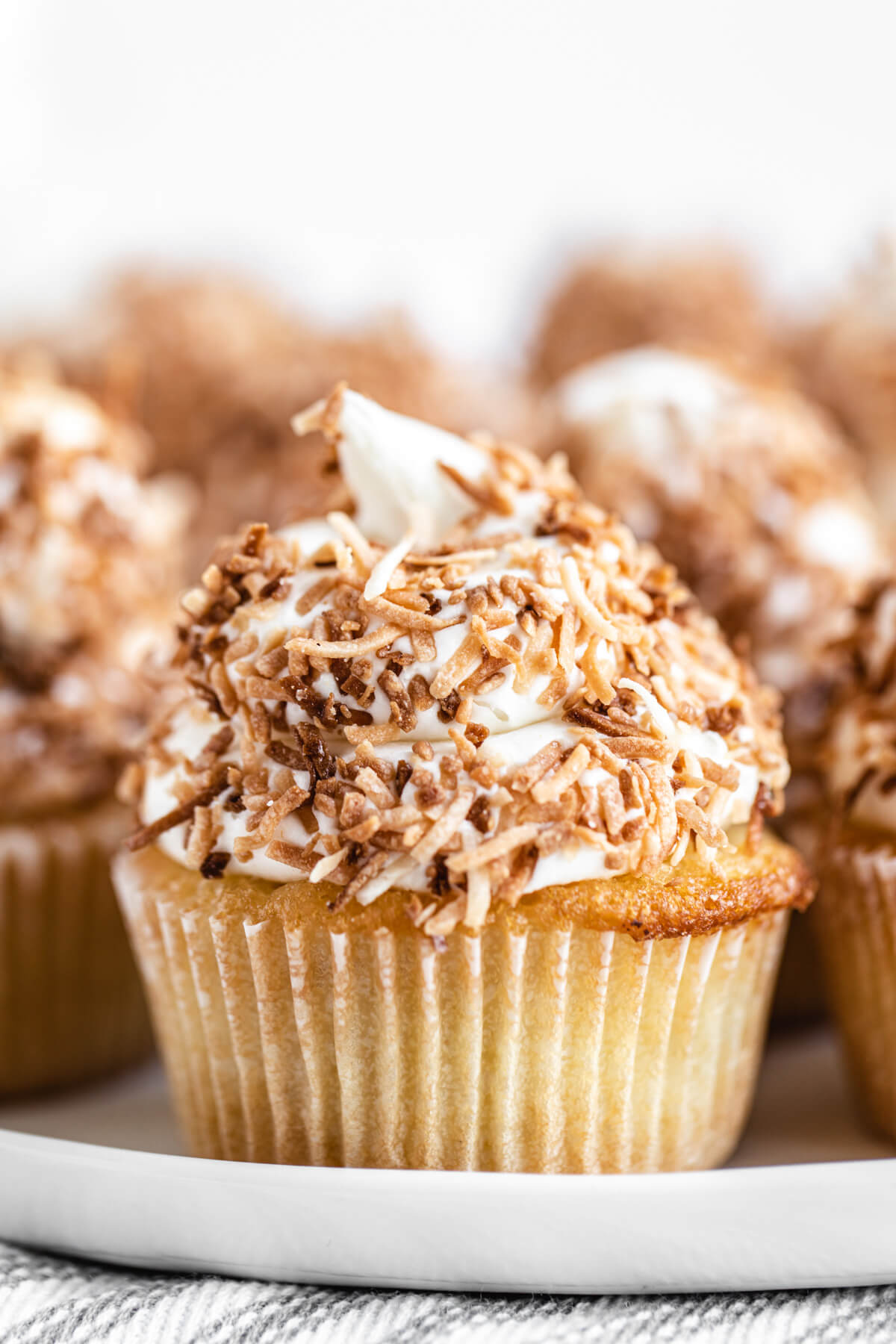 These cupcakes are like eating 2 desserts in 1, and they’re a much simpler alternative than having to make an entire pie. They’re absolutely irresistible for any hardcore coconut lover, and they have the same coconut cream pie taste in a light and fluffy cupcake!

For the Coconut Custard Filling:

For the Coconut Cupcakes: 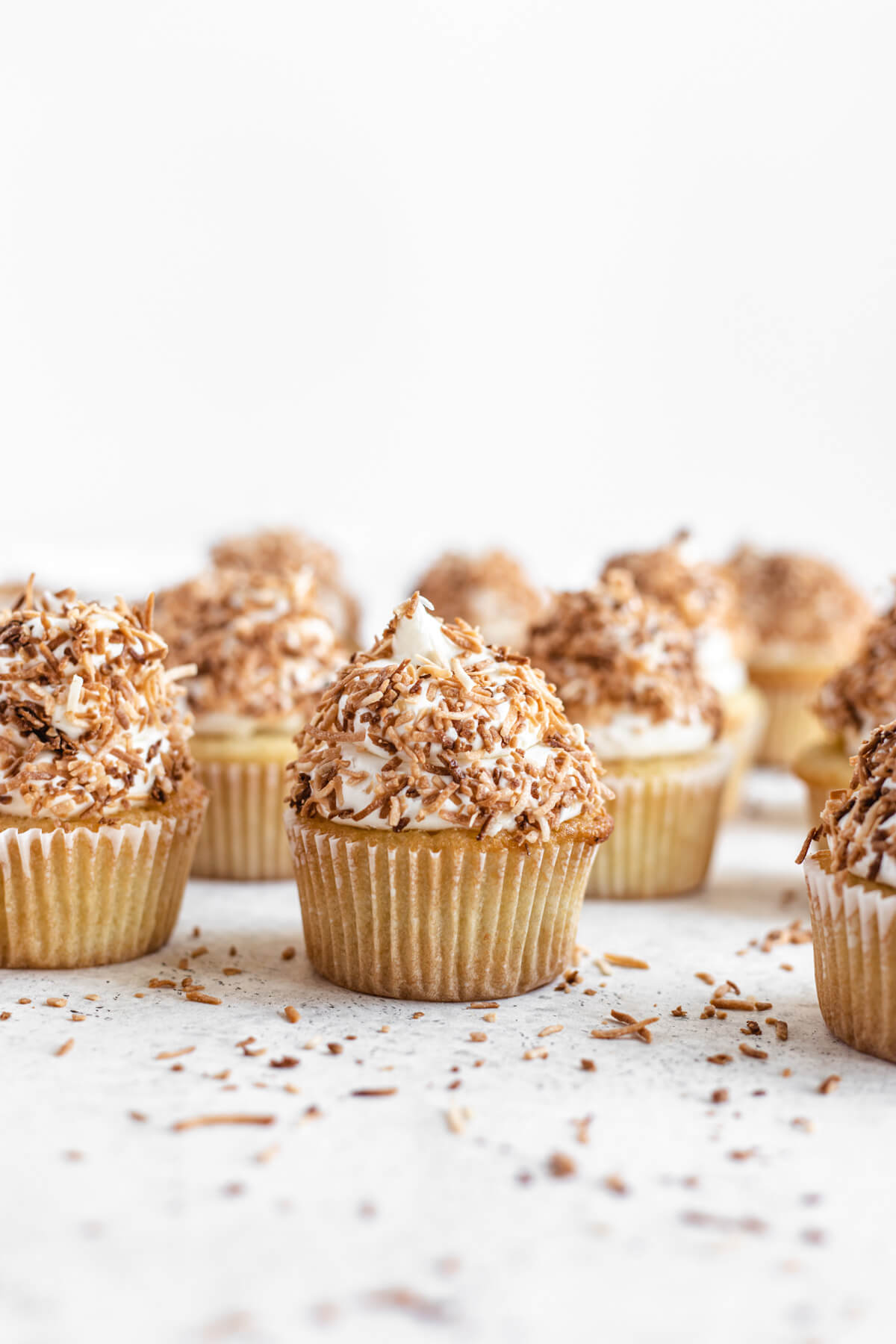 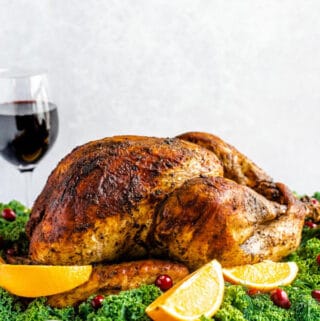 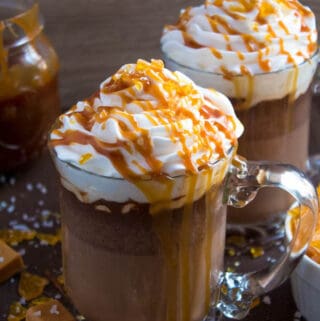 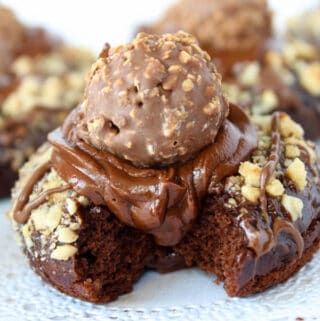 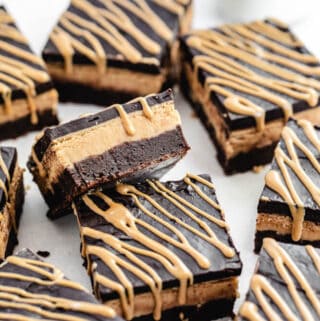